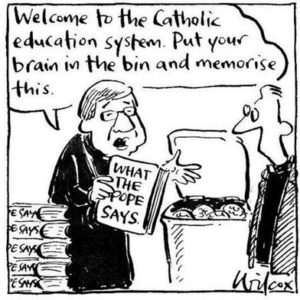 The Catholic Church has had some bad press of late, what with tales of sexual abuse spilling across the front pages and, just for good measure, frequent wink-wink nudge-nudge reminders that Prime Minister Tony Abbott is himself an adherent of Rome. Now, thanks to his encyclical on climate change, Pope Francis seems to have bought his church some credibility in the eyes of those who have so little themselves. The contempt for Catholics and Catholicism that so frequently animates SMH cartoonist Cathy Wilcox seems, at least for the moment, to be in retreat, so don’t expect any more contributions like the one above. At least not for a week or two.

How curious! Several years ago, Turnbull didn’t give much weight at all to Rome’s views on another matter. As the SMH headline of the day put it,