In the SMH, cartoonist Cathy Wilcox demonstrates why she was wise to channel her talent, such as it is, into the drawn image, rather than the written word. Her topic — no surprise — is the Je Suis Charlie hashtaggery and her own stout resolve to stand proud and brave with those whose business it is to offend. What makes the column curious is that she spends several paragraphs discussing the courage of French scribblers in attacking not Islam’s “power and corruption” but that of the Catholic Church! This, she notes, is “asking for trouble”, yet the felt-tip brigade bravely persists with its scathing commentaries.

As no pistol-packin’ priests nor explosive altar boys have invaded the offices of ‘Le Monde of late, the non-conceited might consider such bravery somewhat wan, but Ms Wilcox, whose oeuvre is strikingly deficient in examples likely to inspire Islamic fulmination, is as one with her French counterparts. When she feels the need to lampoon a religion, it is Catholicism that gets the sharp end of her pencil. For example, there’s this 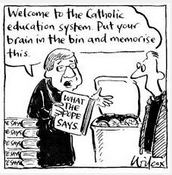 and this, lampooning the Resurrection as a fairy tale and depicting Christ as Humpty Dumpty 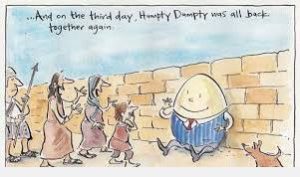 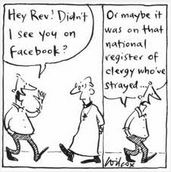 When it comes to Islam, however, Wilcox is more than sympathetic 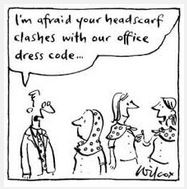 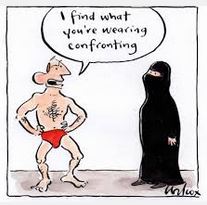 Wilcox concludes her essay with the promise that she and other cartoonists “won’t be changing the way we do things.” Until and unless Coalition supporters, climate-change sceptics and Catholics start reaching for their guns, Wilcox has no real reason to expect her life-insurance premiums will increase.