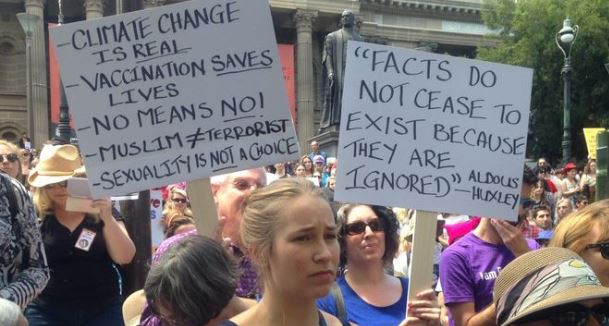 What do women want?

To impede the smooth flow of traffic, if one is to go by the globe-girdling agitation of ladies who don’t much approve of the latest US President or, for that matter, the result of elections that fail to produce the result they anticipated.

Yesterday in Melbourne, where outpourings of local feminist sentiment can be murkier than the Yarra, the crusader in blue took her male along to join in the fun. No doubt he enjoyed the outing, especially the heavy lifting of those weighty issues on his half of two signs extolling the correct positions on a number of fashionable topics. The photo also perhaps explains why it can sometimes be rather hard to stay on top of the latest trends in feminist discourse.

Surprisingly, if women are to be free, it seems capping CO2 emissions is a vital first step; likewise, all who aspire to enlightenment must scoff at any link between Islam and frequent outbreaks of mass murder — a conclusion only those silly enough to favour an afternoon at the beach over marching and chanting would ever be likely to entertain. They are the same people, just by the way, who might well regard the veiling of women, child marriage, arranged marriage, consanguineous marriage, genital mutilation and the scripturally ordained second-rate status of women as symptoms of a true patriarchy. Feminists, of course, know better.

And don’t forget that sexuality is not a choice — handy advice if troubled by a sudden interest in bicycle seats or, for that matter, an eagerness to parade as 50% of what many might regard as a humiliating public exercise in cognitive dissonance. “Facts do not cease to exist because they are ignored,” proclaims Madam’s placard, complete with an erudite attribution to Aldous Huxley, who penned that thought in A Note on Dogma. To be fair, she could not have squeezed too many more words on that single sheet of cardboard and must therefore be granted the benefit of the doubt for not sampling another relevant quote. It is in Huxley’s letter of congratulation to George Orwell upon the publication of 1984.

… I believe that the world’s leaders will discover that infant conditioning and narco-hypnosis are more efficient, as instruments of government, than clubs and prisons, and that the lust for power can be just as completely satisfied by suggesting people into loving their servitude as by flogging them and kicking them into obedience.

Infant conditioning? Narco-hypnosis? Why, it brings to mind Ritalin time with Matron after a Safe Schools class!

For more on the International Day of Female Fury in Comfy Shoes, follow the link below, where another strange discordance is in evidence. When Donald Trump is surreptitiously recorded saying something vulgar in private, he is to be roundly condemned. But it’s entirely different when feminist heroine Madonna speaks of yearning to blow up the White House and urges her new president to go suck a …. well, just follow the link. At Quadrant Online we leave such language to the ladies.