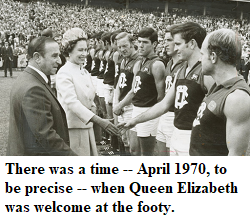 In today’s Herald Sun, Rita Panahi takes the AFL to task for its shameful decision to exempt the women’s competition from observing a minute’s pre-game silence in honour of the late Queen Elizabeth. Her column is paywalled, but this observation shouldn’t be missed:

The pitiful decision by the AFL to ditch a tribute to the Queen during AFLW Indigenous round gives an insight into what we can expect if we continue to pander to the race-baiters and the identity politics-obsessed activist class….

…. AFLW players should be embarrassed they couldn’t bring themselves to honour one of the most significant women in history.

As many have noted it appears the W in AFLW stands for ‘woke’, not ‘women’.

If it wasn’t for the ‘Western imperialism’ that they decry so incoherently there wouldn’t be an AFLW or the many platforms where the perpetually aggrieved can play victim.

Mundine made that remark while speaking with 3AW’s Neil Mitchell about the AFL’s latest woke disgrace — and he had a lot more to say, all of it worth hearing.