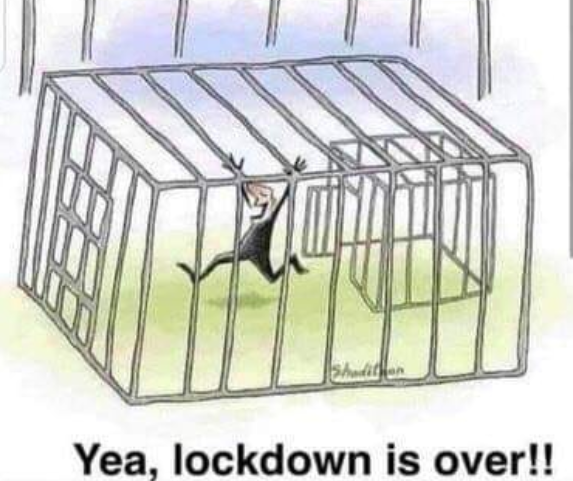 The frenzied and manufactured ‘state of emergency’ prevailing south of the Murray is a disease eating at the heart of Victorian society. Our state is very sick and growing weaker by the day, obliged time after time (four lockdowns-and-counting!) to sip from the poisoned chalice of Premier Daniel Andrews’ falsehoods, incompetence and, there is no other term for it, institutional corruption. Canberra’s dialysis machines — JobKeeper, JobSeeker and, as of lately, ad hoc emergency payments — not only won’t fix Victoria, they are making things worse by insulating this appalling government from the immediate consequences of its many follies.

Here the words of our longest-serving prime minister, Sir Robert Menzies, founder of the Liberal Party and a great Victorian, come to mind: ‘Leaners grow flabby; lifters grow muscles.’ In the Victoria of today the flabby burden of soaring debt, higher taxes and joblessness can only see the state’s economy grow ever more feeble. Combine that with a government addicted to secrecy and deception, one so brazen in its contempt for the citizenry that it set up a Potemkin village of a judicial probe into the hotel quarantine debacle that was nothing but facade. Look behind the appearance of hearing-room probity and lawyerly manners and what you see is the intention from the very start that no findings apt to cast Andrews & Co in an adverse light would ever be revealed. Nor were they.

Andrews is a rogue who peddles fear and dependency. His governance since Wuhan shared COVID-19 with the world has been informed by imagined scenes of a viral Armageddon which, with the help of a tame press, he has sold to the long-suffering public time and again. Bureaucrats, especially health bureaucrats, have cast themselves as post-modern bishops, their edicts on how we must behave, how we must not question the never-revealed rationales for lockdown after lockdown and why we must submit to the caprice of those who imagine themselves our betters is holy writ, arrogance made flesh. Consider — just one of so very many examples I might cite, the sad case of the Western District lad who drowned on a school excursion. His shattered parents requested an exemption —  there had not been a single COVID case anywhere nearby — and sought to be allowed more than the maximum ten mourners at his funeral. Permission denied! Nothing resembling a rational explanation was forthcoming, just hollow sympathy as a preamble to the bureaucrats’ callous refusal to recognise human grief and need.

These all-powerful arbiters of what is permitted or prohibited are pulling out the rug from under the feet of Victorian workers and small-business owners. Lives and livelihoods are destroyed by ‘health advice’ marked ‘confidential top secret’ and never to be disclosed to the public.

English philosopher and statesman Sir Francis Bacon observed in Novum Organum how “there are certain intellectual flaws that are universal among mankind, or, at the very least, very common”. Among them are abstractions and errors arising from common tendencies to exaggeration, distortion and disproportion. Thus do we see hyperbole and panic at the appearance of  ‘new variants’ and lockdowns based on what is happening in crowded, teeming Mumbai, not what is happening on the ground in the First World of Melbourne.

Bacon also spoke of ‘idols of the cave’, by which he meant thoughts lurking in the dark corners of minds shaped by temperament, education, habit and environment. We see as much in Victoria’s Chief Medical Officer Brett Sutton, whose focus is sharpened to the point where all he can see is the virus. Initially, the object was to “flatten the curve” with measures intended to save our hospitals from being swamped by the sick and dying. That object was achieved, but then Sutton’s monomaniacal determination to eliminate all trace of  COVID from Victoria kicked in. The inevitable result has been short-lived success, followed by the reappearance of the virus, followed by more lockdowns and destruction. That is what happens when a scientist is given charge of what should be political decisions arrived at after balancing all the many factors in play, from the empty shops now punctuating formerly vibrant shopping strips to children for whom a day in an orthodox classroom has become a novelty. How many children will be burdened with poorly developed social skills, nor read and write at a proficient level?

Life under the Andrews regime has become a real-life Animal Farm, where all are equal but some more equal than others. When the latest lockdown shuttered stores once again it was a huge boon for Coles and Woolworths, allowed to remain open while Mum and Dad operations were banned from doing business. While many individual Victorians find their jobs and livelihoods put on ice, largely unionised industries, such as construction, are given the green light to operate as normal. Under this government, cafes are a no-go, but CFMEU sites are sacred. And then, of course, above all else and everyone, there are the legions of public servants. Not one of them has lost a day’s pay. It’s not who you are in Victoria these days, it’s who your mates are.

The moral damage doesn’t stop there, and its most excruciating wounds perhaps may be seen in the debasement of Victoria Police. Before COVID arrived we saw the appalling Lawyer X scandal, the stitching up of Cardinal George Pell and a succession of chief commissioners whose foibles have included dining sumptuously as the state burned on Black Saturday, playing fast and loose with crime statistics and internal intriguing that puts the scheming eunuchs of a sultan’s court to shame.

Now we have a nakedly partisan and politicised VicPol. Fill the streets with thousands demonstrating in the cause of Black Lives Matter and the police play it softly-softly. Take to those same streets to plead for sanity — for an end to the arbitrary rulings that ban visitors to citizens’ homes but permit brothels to hump away as normal — and the police will come down hard. Doors are being kicked in and pregnant women arrested for Facebook posts or sunning themselves on a beach. Journalists not of the fawning, Dan-doting variety are visited after dark at home and warned not to push their luck. A police force — a good police force — upholds the law and doesn’t partake in political management. While there are undoubtedly many decent and upright officers, that can no longer be said of the force itself.

Victoria is rotting from the inside, economically and morally. When Prime Minister Morrison returns from the G7 summit, rather than indulge Daniel Andrews’ next and inevitable debacle and consequent lockdown, he might want to try a dose of tough love. Victoria is ruined unless someone finds the courage to resist the madness.