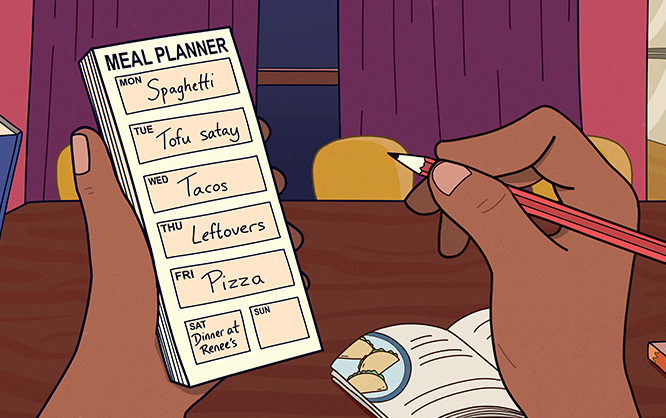 How’s this for cheek? The socialist government of Victoria, forever shoving its nose into citizens’ lives, is now telling the public what to eat in their daily meals.

A series of ads from one of Victoria’s myriad sheltered workshops for bureaucrats, Sustainability Victoria, is instructing readers of local papers on acceptable household menus. Under the heading “Small acts make a big difference” the ads announce with an air of discovery that “Planning weekday dinners saves you money and reduces the amount of food going to waste”. Don’t ask about the amount of taxpayers’ money going to waste on patronising ventures like this.

‘Planning weekday dinners’. What a clever idea. Remarkable it hasn’t been thought of before. But seriously, does anyone imagine that meals just materialise unplanned out of nowhere? Oh yes, the perpetually adolescent millennials who staff Sustainability Victoria probably do, still living with mum and dad and waited on hand and foot.

To help you cope with the intellectual challenge of understanding the ad, there is an infantile drawing — reproduced atop this page — showing a hand with pencil poised over a notepad labelled “Meal Planner”. And oh, the Lucullan treats being planned. Your kitchen as a temple of gastronomy thanks to the epicurean advice of the Andrews regime. Not.

Monday there’s “spaghetti”, presumably unadorned since there is no mention of sauces or condiments. As such, it’s hardly a tribute to the enormous variety of Italian pasta dishes. It could be out of a tin.

Tuesday is the day that sustainability fans really enjoy because they get “tofu”, and not just any old tofu but “tofu satays”. Mmm. So good for you, and Gaia too, one imagines.

On Wednesday for no very clear reason we dine on “tacos”. Eat your fill because Thursday is sustainability day with a vengeance with only “leftovers” for dinner. Unless you’re in a family of anorexics that won’t amount to much – a squishy string of spaghetti and a cold blob of tofu. Heaven, though, for anti-obesity obsessives.

Friday used to be fish day in the bad old era when most people were Christian, but don’t expect the secularists of Sustainability Victoria to recommend oysters and lobster. Gruel with fish stock is more their speed, but perhaps they couldn’t find a recipe because tonight we’re back to the delights of the Italian table, this time with pizza, but just as on Monday, with no specifications. Perhaps you’re allowed a splash of tomato sauce, not the bottled kind that food snobs imagine is only consumed by rednecks but the autentico sort that Australia’s most useless prime minister, the late Gough Whitlam, crowned his career by advertising on TV commercials.

The important thing is no meat. No prosciutto or salami or meat products of any kind with your pizza. No corned beef hash for leftovers. No hearty family roasts, no steak and kidney pie, no crisp fried chicken. Doing without meat has been a subtext of the menu suggestions all week. The dismal meals on the list, if you can call them meals, doubtless reflect the kind of cheerless food the Sustainability Victoria lot would choose for themselves. They’d all be vegans, and even if they’re not, they don’t like meat, not least because (a) most people do like eating it and the authoritarian ideologues of the kind employed by the Victorian regime get a kick out of stopping people doing things they like and (b) we’re dealing here with eco-crackpots who have come up with the notion that natural gases emitted by livestock are complicit with fossil fuels in stoking up the ‘climate emergency’.

Saturday is “dinner at Renee’s”. A restaurant or a relative? This being right-on Victoria, Renee might well have been Ronnie till recently, but as to what s/he’s likely to serve up, Sustainability Victoria’s imaginative capacities can’t be sustained that far so we don’t know. As for Sunday, its absence from the list suggests that that day has been abolished, just like those earlier authoritarians the French revolutionaries did.

The point of all this, it will be immediately clear, has nothing to do with what people eat. Sustainability Victoria couldn’t care less, in fact would be thrilled, if Victorians lived off nuts and berries. (Many soon will, given federal and state plans to cramp everyone’s culinary style by making kitchen stoves, like everything else you need power for, dependent on the whims of wind and solar “energy”. There will hardly be enough heat to boil and egg.)

No, the point is to “eliminate waste”. And it’s true that lots of food gets wasted, though experience suggests it’s not so much through families lashing out on elaborate meals and not being able to eat it all as in shops and supermarkets having to keep too much stock, particularly out-of-season stock, so that everything from everywhere is always available, a tendency encouraged by “gourmet” food pages in publications like the Melbourne Age, whose left-leaning readers just love multicultural cuisine, indeed prefer it to traditional Aussie, which, along with tomato sauce, they’re inclined to sneer at. Indeed, if you’re one of the dwindling number who ever look at the Age you will have been told that Melbourne is the gastronomic capital of Australia, if not the world. You can’t be that without restaurants buying up a lot of food that, unconsumed, will end up being thrown out. And even if someone orders it, restaurant portions are usually too big – to justify the gargantuan prices – so food gets left on the plate. It can’t be taken home either because of over-cautious health regulations forbidding the once ubiquitous “doggy bag”.

Since no one supplying food to the public can know exactly how much food will be needed at a given time, waste is a consequence of mass food provision. Of course you should try to avoid it.

But in targeting families the Victorian government is dishing out advice to the wrong audience – on purpose, I’ll bet, since as we saw in the pandemic this is a government determined to micromanage its citizens’ lives (and itching to lock everyone down again when the next viral scare appears). It should back off and leave households to practise their own economy. Responsible families are well aware of the cost of wasting food – how could they not be, with lettuces at twelve dollars?

Instead of lecturing families on waste, this endlessly interfering government could more usefully devote its energies to solving the hunger crisis that now exists in Victoria and throughout the country, hidden behind suburban front doors and scarcely ever mentioned in the media. Yet more than one in five Australians don’t get enough to eat, according to the St Vincent de Paul society and other agencies. Less money thrown away on silly government advertising and more spent to feed people adequately should be a priority for every Australian politician.

15 thoughts on “Dear Leader Dan Cares What You Eat”