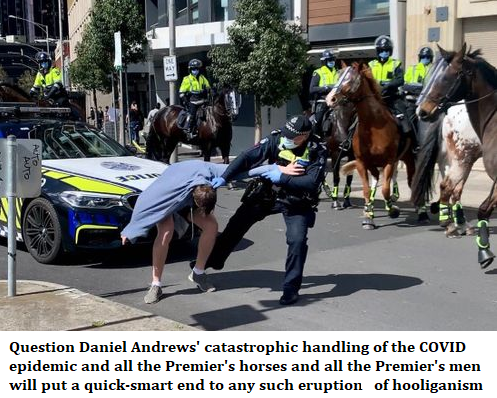 Victorians have today (June 9) been promised parole from their locked-down homes and lives, with the second week of the two-tier restrictions — one set of edicts for Melbourne, a slightly more relaxed code for the regions — soon to be amended. This means that Melburnians will be able to leave their homes for other than the five government-ordained reasons that have made prisoners of citizens. [1]

Not that there is all that much to celebrate. Where travel from home is now restricted to 10km, as of midnight on Thursday it will be permissible to venture a whole 25km from your front door. As Quadrant Online’s editor tells me, that is still not quite far enough for him to visit, legally, a gravely ill friend, but he will just have to cop it. Like so many of the fines and restrictions imposed over the past 15 months on what used to be normal life, there is little rhyme or reason, and never an explanation, for whatever Spring Street’s controlling whims might be on any given day. [2]

In this context, religious services are said to provide hope and comfort in the midst of despair, especially in times of sickness and death. However, going to church has not been considered “essential” by the Victorian government.[3] Gatherings for worship, prayer groups, or other religious purposes were forbidden as “non-essential” activities.

In Melbourne, a pastor has been arrested for defying these draconian measures. Rev Paul Furlong, of Revival Church in the outer suburb of Narre Warren, had already been arrested for daring to post a Facebook video announcing that his church would hold a Sunday service. Victoria was in a seven day lockdown at the time. On Sunday, May 31, police stormed the outdoor service and ordered his congregation to leave, before issuing infringement notices, wrestling congregants to the ground and arresting Furlong. That outrage, just one of so many Victoria has seen, is covered by Alan Jones in the video below:

Rev Furlong was arrested, jailed and refused bail. He is an active evangelist, with a successful ministry that reaches out to many nations, including Pakistan, Kenya, Nepal and India.[4] In a Facebook video, he stated:

My church is open. I’ve said I would not shut the church again. This Sunday at 10 am, my church … [is] open for worship… This comes down to a freedom of religion, movement, association.[5]

I wholeheartedly agree with him. If bottle shops are open, which they are and doing a roaring business as Victorians seek respite from isolation in alcohol, then attending religious services definitely should be open too. The freedom to join with fellow worshipers is essential to people of faith. It is scandalous that an Australian government says it is not.

Rev Furlong has had the courage and conviction to resist these oppressive rules — and perhaps his defiance and the price he is paying for it have had an effect, as the latest, updated restrictions are lifting church attendance from 10 people to 75. I think it cowardly of Victorian church leaders to accept the Andrews government’s decree that worship is not an “essential service”.  They should resist these acts of governmental oppression, ensuring that their fundamental freedoms are properly respected. Critical among these are freedom of religion, freedom of speech and freedom of association.

But while the men and women of the cloth disappoint in shrinking from defying the state and its VicPol enforcers, my disappointment is more pronounced in the case of one prominent Christian leader in particular. I speak of Prime Minister Scott Morrison. While his fellow believers in Victoria see their most basic rights violated, Mr Morrison simply refuses to criticise the Andrews government in the name of supporting “national leadership unity”. This forbearance is extended despite Victoria’s bungled quarantine system which has been directly responsible for each of the state’s four-and-counting ruinous lockdowns. Few Victorians, I am told, believe there won’t be a fifth.

We think that the Victoria response is fair and appropriate and acknowledge and thank them for that.[6]

At a May 30 press conference, Hunt also stated:

We believe that the steps taken by Victoria … are appropriate. And we welcome them.[7]

In a similar vein, the Prime Minister says he has offered the unconditional assistance of the federal government for whatever the Victorian government might need:

Right now, every support has been given to the Victorian government … and I have made it very clear to the Premier that any other addition support he requires he will receive.[8]

Sadly, Mr Morrison was as good as his word, last week announcing yet another temporary COVID disaster bailout to make possible the latest Victorian lockdown. Need it be said that such support provides further incentive and encouragement for the continuation of these arbitrary measures?[9] [10]

More than $45 billion in federal money has been poured directly into Victoria to support the lockdowns and attempts to ameliorate the consequent damage to industry, the economy and people’s lives. Of course, without the financial support of the federal government none of these measures by the state government would be possible.

The Prime Minister often argues that lockdown measures in Victoria are based on “expert health advice”, which is the line Victoria’s leaders also spout. Yet media requests to see the arguments for lockdowns are rejected out of hand. The little people of Victoria must do as they are ordered, it seems, but have no right to examine the purported reasons why.  And yet, as Janet Albrechtsen points out in The Australian, such lockdown restrictions, particularly on those living in Melbourne, have led to ‘untold economic harm to millions of Victorians and damaging the economy, a dangerous spike in mental health illnesses especially among young Victorians, and negative educational outcomes’.[11]

To give a better idea of what it means in practice, we have witnessed Victoria Police arresting people who dare to promote social media protests against these lockdowns. In September last year, police in Victoria made international headlines by arbitrarily arresting a pregnant mother in front of her little children in their Ballarat home. She was arrested and charged under section 321 of the Victorian Crimes Act 1958, which makes it an offence to “pursue a course of conduct which will involve the commission of an offence”.[14] Her “crime”: posting a Facebook message announcing there would be a protest against lockdowns in the regional town.[15]

There are questions whether this concerned mother had committed any offence under that specific Act, given the lack of intentionality required by the criminal law. There was no element of intentionality in her behaviour, since she was entirely unaware of any illegality. Besides, her Facebook post certainly did not incite people to protest in a manner that was inconsistent with the Stage 3 lockdown conditions then prevailing. To my mind this is an irrefutable violation of fundamental rights in Victoria’s Charter of Human Rights and Responsibilities but also the constitutional right to freedom of political communication. The Victoria Charter explicitly guarantees to every person their fundamental legal rights to privacy and peaceful assembly as well as freedom of association, movement, thought, conscience, and expression.[16]

However, Victoria’s Police Commissioner Luke Cornelius was “satisfied” that police officers had acted “properly” and “reasonably”. He actually accused the concerned mother of engaging in “serious criminal activity”, warning that police officers would be deployed to make similar arrests.[17] He then issued the following threat to those who dare to resist any such acts of political tyranny:

We are very concerned, and in fact, outraged is probably a fair word, to say there are still people in our community who think it’s a good idea … to leave home and protest on our streets … Take the selfish option and leave home to protest, we’ll be there for you.[18]

How can our system of representative government be reconciled with police bursting into private homes to arrest a mother in front of her children because of a Facebook message?  Under the Victorian government, writes Greg Sheridan, “all the mechanisms of democratic accountability have virtually disappeared … Victoria has become a dysfunctional one-party state with a mostly compliant local media”.[19]

The arrest of citizens for speaking out is an undeniable mark of every dictatorial regime.[20] However, Premier Andrews has described these police actions as merely “operational matters for Victoria Police”.[21] This attitude — that the state is the master of its people, not the other way around — may help to explain his enthusiastic support for the Chinese Communist Party (CCP), which has now been found responsible for the outbreak and spread of the coronavirus that has infected more than 173 million people across the globe.

In a June 7 article in The Australian, Dr Steven Quay, who holds both a master’s and a doctorate degree from the University of Michigan, and Richard Muller, an emeritus professor of physicals at the University of California-Berkeley, informed readers that COVID-19  is a million-to-one proposition to have arisen naturally. Instead, they believe  it extremely likely the virus was created in a CPP lab at the Wuhan Institute of Virology.[22] And yet, “Daniel Andrews is standing firm on China”, writes political report Richard Willingham for the ABC News.[23] Amidst all this, offering full support to Premier Andrews and his authoritarian regime, is the Prime Minister. Surely he should be deeply concerned about all these violations of human rights. Instead, we get this from him:

Andrews has my full support … I will give him every support he needs. [24]

As noted by Dr Paul Collits, Morrison and Andrews need each other. “While Andrews exists, Morrison escapes even the merest modicum of scrutiny. While Morrison exists, with his national cabinet, Andrews get protection”.[25]

Premier Andrews is an authoritarian ruler, no doubt about it, and the Prime Minister is effectively empowering and facilitating his arbitrary government. Indeed, the Morrison Government is actively financing and assisting these draconian, lockdown measures that have inflicted great pain and suffering to the people of Victoria.

[5] Melissa Iairia, ‘Christian Pastor Arrested for Flouting Lockdown Rules’, The Australian, 31 May 2021, at

[25] Paul Collits, ‘When We Needed Churchill – We Got ScoMo’, The Freedoms Project, 16 September 2020, at https://www.thefreedomsproject.com/item/567-when-we-needed-churchill-we-got-scomo

Who Earns What at Their ABC?