The Ecosexual Bathhouse is the queer/environmental creation of Perth art group Pony Express, comprising US expatriate academic Loren Kronemyer and playwright Ian Sinclair. It was also a feature of Melbourne’s Next Wave Festival  in the Botanic Gardens last May. The Australia Council gave Sinclair a $29,998 development grant  for the Bathhouse in May last year and a further $26,999 last November (total $56,997).

The Bathhouse also got $20,000 from the WA Department of Culture and the Arts, and $4000 from the federal government-supported Creative Partnerships Australia.

The Bathhouse attendants wear towels and lingerie. In the “Pollination Hall” friends, sometimes called “fronds”, pollinate orchids by hand, using a finger condom given to them by the maître d’.

In the Exploration Area, there’s a   “composting glory hole” [ii], in which audiences can dip their hands through a living grass cover to feel and hear the amplified sensation of a worm farm below.” There is also a “devolution tub”, where participants sit in front of a pond growing in a tub and trigger a phone- sex conversation with the pond itself.

“and, clad in a snakeskin bodysuit and a ring-gag, perform her slithering dance and drool all over you: a snake preparing to digest her prey.”

I could also have enjoyed “bespoke ‘ecoporno’ films that apply pornographic conventions to footage of the environment”. In one clip (below), a naked woman rolls around with an enormous WA banksia flower until it rains pollen over her face. 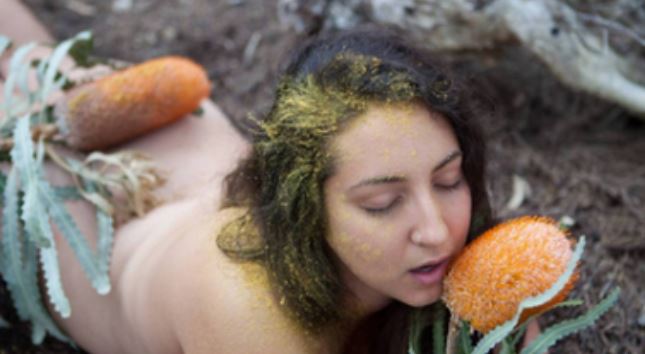 The Bathhouse offers a route for surviving the Anthropocene from the “devastating forces unleashed by global capital”.  Pony Express’s Kronemyer explains, “Everything is crashing down around us, and our response is orgiastic decadence, rather than increasing austerity and self-containment.” It’s a “palliative strategy” that will help us make our apocalypse “more mutual, comfortable, maybe even pleasurable.”

The venture also protests at the “literal rape of nonhumans” involved in genetically-modified cropping and artificial insemination.

Ex-porn star Dr Sprinkle on her last Melbourne theatre show had audience members inspecting her cervix with a speculum. She pushes stranger boundaries than that:

“Like when I ate some peyote buttons in the Arizona desert and made love with a big, erect, suaro cactus. There was no touching of the cactus for obvious reasons, but I swear, that cactus and I exchanged our sexual energies.”

Sprinkle describes herself as “a sybaritic cougar with ecosexual tendencies…I am new bride, recently married to the Earth, the Sky and the Sea, and engaged to marry the Moon.”

Her partner Dr Stephens developed her ecosexuality as a boarder at swanky Chatham Hall school in Virginia.  With the aid of marijuana, MD 20/20, a few Quaaludes, and a little acid,  she and friends created visions of an ecosexual revolution: “We econuns loved nothing better than to go out into the hay fields, strip naked and commune with the earth, the sky and the water.” She followed up with cocaine-fuelled alcoholism in Boston.

Obviously, ecosexuality has an impeccable pedigree, is climate-friendly and is deserving of taxpayer support. It can’t be long before ecosexuality is included in the Safe Schools Curriculum.

The sly assault on faith-based schools