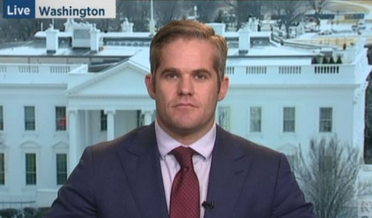 This column yesterday drew readers’ attention to the swiss-cheese journalism of the ABC, which all too often presents only those facts which suit meme and preferred narrative — in the latest instance, Donald Trump’s purportedly impeachable telephone conversation with the Ukrainian president. What veteran students of the national broadcaster will know is that all too often it’s not the published substance of reports that is most informative so much as the holes.

Well there is another of those gaping chasms in ABC correspondent Conor Duffy’s latest summation of Ukrainegate — a void that might easily have been filled with the addition of just a few simple, honest words. We’ll get to them in a tick. First, here is Duffy (pictured above) and co-author Emily Olson quoting an august professor of law on the trouble Mr Trump is in:

Randall Eliason, a professor of white-collar crime at George Washington University, says bribery seems one of the avenues most likely to be pursued.

“The most likely one that I see is bribery — the idea would be that he’s a public official demanding something of value from Ukraine, which is the investigative work, in exchange for him releasing the aid money,” Mr Eliason said.

“That’s what we call a quid pro quo in bribery law; you do this and I’ll do this official action for you.”

It would have been germane for the ABC also to report that the Justice Department has already dismissed Professor Eliason’s assertions of bribery, campaign-contribution violations and a quid pro quo, but that omission is not the biggest hole in the report.

It would have been so easy for Duffy to provide that information, as the Open Secrets website makes it the work of a few clicks to learn to which parties and candidates specific individuals contribute and how much.

In Professor Eliason’s case it is 36 donations totalling $18,545, with every single one going to a Democrat.

Why didn’t the ABC provide that background: Bias? Incompetence? Indolence? Undemanding editors? All of the above?

Whatever the reason, know that the ABC can’t be trusted, not even for a billion dollars-plus per year.

Been There, Done That