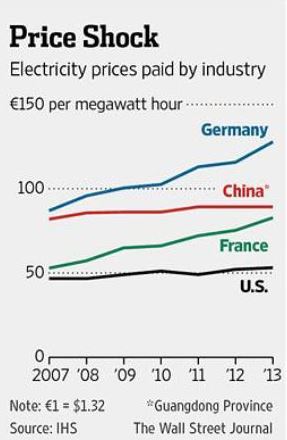 The story is in the Sydney Morning Herald , concerns green energy and appears beneath Peter Hartcher’s byline, so there you have three reasons straight away to place not the slightest credence in today’s assertion that Germans are so plentifully supplied with alternate energy the cost of electricity has fallen below zero. In Hartcher’s words:

“There were times on April 17 when wholesale electricity in Germany was selling for minus 14.91 euros for a megawatt hour. So it wasn’t free – it was cheaper than free.”

How could this be? A factoid to beggar the imagination, it flies in the face of other reports that take a rather more dour perspective on the ways Germans are embracing a future with coal and nuclear energy sources officially out of favour. Cutting down forests to feed wood stoves, for example, has been one popular solution as household electricity supplies, far from being “cheaper than free”, go though das Dach. Shivering in the dark has been another response, according to testimony before to the US Senate Foreign Relations Committee.

The chart atop this post is from a Wall Street Journal report detailing Germany’s energy woes, and there is more — much more — on the impact of green thinking on the country’s economy and citizens in this 80-page review by five Swiss energy analysts. Their conclusion: a German-style approach to renewables increases prices, undermines industry and kills jobs while doing nothing to make wind farms and the like more reliable and/or cost-effective.

So how can it be that Hartcher asserts German electricity now costs less than nothing? The first and most obvious explanation is that he works for Fairfax Media, where no competent editors are left to say, “Now hang on a minute, mate.”

The other explanation, the one that didn’t make it into Hartcher’s plea for Australia to ape Germany’s lead, is almost as simple: German power sourcing is shaped by political edict, rather than market forces. When the wind is blowing and sun shining, legislators have ordained that it is so-called green energy which must be fed into the grid for preference. Coal-fired plants, which cannot be cranked up or turned down at will, don’t actually stop producing electricity — they simply run it down an earth wire and let it go to waste. But it is worse than that, as The Economist explained late last year (emphasis added):

…renewable energy surges into the system; it must be, by law, bought by grid operators first, with the producers paid those above-market rates. Those rates are subsidised by a surcharge on customers, and the surcharge must go up when more renewable kilowatt-hours are poured into the system.

But an unintended side-effect of the policy has been that renewables undercut relatively climate-friendly natural gas on price. This means that traditional utilities have turned instead to much more climate-damaging coal for generation. The result is that prices have gone up and the use of renewable sources has expanded, but Germans have ended up emitting more carbon dioxide as a result of the extra coal—hardly the result the architects of the Energiewende hoped for….

When Hartcher states that the price of electricity is less than zero, what he means is the wholesale price, not the price to consumers, who continue to be slugged for the green subsidies that episodically and irregularly underwrite more renewable energy than the grid needs or can accommodate.

Tomorrow, perhaps we can expect to read that Tony Abbott’s animus for renewables — the real thrust and accusation of today’s Hartcher column — will see gay wind generators forced to wait outside the grid while their partners light up The Lodge. It is the SMH, after all, where Hartcher has demonstrated once again that any old rubbish can and will be presented as climate-friendly fact.

For more on what is really going with German energy bills and supplies, see Jo Nova’s report via the link below.