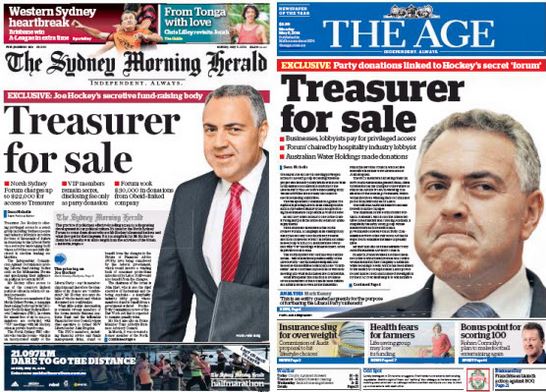 Fairfax Media: A publisher, or an income-support scheme for defamation lawyers?

I had to respond to Quadrant Online’s reference to the costly ignorance of defamation law at Fairfax Media mentioned in passing in your most recent Essential Reading item on the refusal by the Age, SMH and the ABC to cover the Russiagate probe’s fall from grace.

When I joined the Age in December, 1989, I was handed an internally produced booklet on how not to defame.  This practical guide explained what one was never to write, that one must never get personal, and how to express criticism.  There was a page in there on what words to use, and cautious phrasing, that was invaluable, and I have used that approach for the rest of my life.

At the time the SMH had just been through the costly court case over Leo Scofield slating a Sydney restaurant for an allegedly overcooked crayfish.  People right through the Fairfax organisation were furious, believing the internally prescribed rules hadn’t been followed when he wrote that he had been served charcoal on a plate, or words to that effect.  This just wasn’t true.  The SMH lost the case and had to pay up.

There was a way of expressing written criticism you were to follow, a dictate reporters, columnists, editors and sub-editors carefully observed.  I’d take a copy of the Age and would read through, and would regularly come across a piece here and there using the system to make a strong point without defaming.

But these internal guidelines must have been abandoned in the late 1990s.  I had left the paper by this stage, although as I read the morning’s edition I would see things in print that were strictly forbidden not long before — things that were bordering on defamatory, even sometimes crossing the legal line.  The internal rule booklet had evidently been discarded.  It surprised me that there wasn’t a flood of defamation suits, because the actions would have been successful. The law had not changed.

I recall once reading a mid-week issue and noting four articles that all had grounds for legal action.  And as a former staff member, I could see the paper was sinking in terms of quality writing. Probity and journalistic balance were no longer valued, and the overall tenor of pieces were becoming alarmist, sensationalist, somewhat ratbag.

By the way,  I also followed your Essential Reading item’s link to the Melbourne University journalism course and went through the entire thing, reading unit descriptions.  Did you notice the words “report” and “reporting” are nowhere used?  The stress is all about composing “stories”.  Surely that is what writers of fiction do?

For more on the betrayal of journalism, good sense and legal nous follow this link or the one below for Robert Murray’s recent Quadrant essay on the Age‘s descent into poorly edited irrelevance.