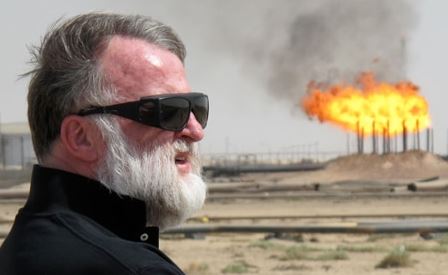 Many things have gone missing from the Fairfax press of recent years — competent editors, subeditors, readers, advertisers, corporate profits, familiarity with the strictures of defamation law and, most of all, the old-time understanding that news organisations exist to report the news rather than filter out the bits which don’t mesh with the worldview of  newly graduated twenty-somethings. (See the blurb for Melbourne University journalism school’s Islam and Politics course to get some idea why modern newsrooms are in the sorry state they are.)

To Fairfax Media’s ledger of loss it may well be time to add the name and two-dollar shop insights of Paul McGeough, who appears not to have a contributed a word to the paper he once edited since September 27. That’s a pity, as the US correspondent’s contortions in officially dismissing a story neither Fairfax nor the ABC has deigned to notice would be a fascinating spectacle.

That story, addressed in the post below, concerns the sad but predictable refusal of both organisations to inform Australians of the growing evidence that the alleged substance of the Russiagate investigation of Donald Trump is, and always has been, a chimera. To repeat, as per below, neither the national broadcaster nor Fairfax has made any but  passing mentions of disgraced FBI investigator Peter Strozk and the expanding retinue of sworn Trump enemies who, or so it appears, have been cooking up “evidence” against the president they loathe. Google lists 303,000-odd recent entries for Agent Strozk, only three — yes, three! — of those in Australian mainstream publications.

Given McGeough’s ardent 3000-word parroting back in May of the view that Trump is likely a Russian mole, you might think he would be very keen to bring his audience up to date, as there is much in that earlier report which is just plain wrong. You would expect a multiple Walkley winner to be dead keen on clearing the clutter of furphys from the altar of truth, but so far not a peep. Perhaps the intrepid foreign correspondent has been kidnapped by Zionist “hyenas”,  a fate that would greatly distress his Palestinian activist pillowmate.

Whatever the reason for McGeough’s absence, anyone curious and capable of clicking a mouse can catch up with all the news Fairfax and the ABC don’t think worth reporting via this link or the one below. What National Review‘s Andrew McCarthy lays out chapter and verse is simply not being reported by Australia’s media outfits, which insist we can and should trust them always.

Oh, and if McGeough ever does get around to covering the real Russiagate scandal, this piece by The Federalist‘s Molly Hemmingway lists the “eight worst defences” so far of partisanship and corruption within the investigation.

And, yes, those rationales are genuinely pathetic — so much so McGeough could prop a printout by his keyboard, re-write the lot and lustily endorse every single ludicrous one.