‘A bunch of girls’ 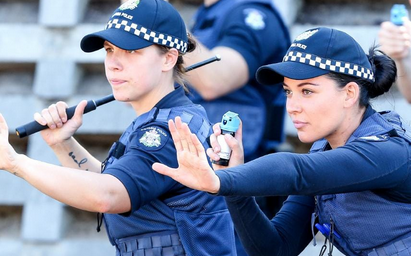 Victoria Police recruits will be given more support to pass an initial physical fitness test to get into the force under reforms designed to get more women in the ranks.

The force’s approach to the strict pass/fail fitness test will be modified so recruits who fall slightly short of the grade can be accepted as long as they meet other key criteria.

Those recruits will be given extra training so they can pass the fitness test at a later date.

The force is changing its approach after it failed to reach a target of 50 per cent female recruits, despite vowing to tackle a culture of sexism in its ranks. Only 30 per cent of current police recruits are women.

…The court heard when police attempted to arrest [Yak] Dut for being aggressive towards them, he kicked out at the female officers – senior constables Meredith Grisold and Elizabeth Moss – and yelled ‘‘sexually demeaning language’’.

He “roundhouse” kicked one officer to the face, head and shoulder before eventually being subdued. The other officer was kicked to the legs.

At the police station Dut later told investigators that he was happy he kicked the ‘‘s—dogs in the head’’ and that he would shoot them with their own guns.

He labelled the arresting officers just ‘‘a bunch of girls’’ who he’d happily kill and that he’d get away with it as no magistrate would lock him up because he was black.

Is it sexist to wonder if Mr Dut would have been so ready with the head-kicking and abuse were the officers attempting to arrest him large and muscular constables with fists like Christmas hams? You know, the sort who don’t need special considerations to pass the push-up test.

With apologies to Mr Creosote…