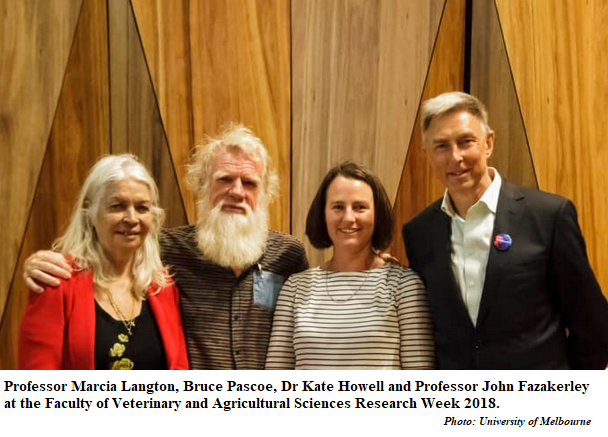 Business titans known as “Enterprise Professors” at Melbourne University are a bright bunch with international clout. But there’s one frightful dud, Bruce Pascoe, who’s a director and member of the Twofold Aboriginal Corporation at Eden, which strangely claims 100 per cent Aboriginal membership. Twofold’s financial disaster is the subject of this essay, but I need to fill in the background first.

When the university launched the Enterprise title in 2015, it determined that only the most respected, highly qualified business people and academics should get the honour: no dilutions please. As the university’s official guidelines say,

Alongside and distinct from traditional academic appointments, Enterprise appointment titles are a mechanism to enable the University to recruit industry leaders and experts who can enrich and offer valuable contributions to the University’s teaching, research and engagement activities through their industry knowledge, expertise and practice.

An Enterprise Professor is at Level E on the pay scale, equal to any other professor and good for $200,000 a year.

Here’s a sample of the university’s distinguished Enterprise Professors:

♦ Hugh Williams (Business). He was a senior executive for Google, Tinder, Microsoft and eBay. He’s published over 70 research papers and holds more than 30 patents. He invented Infinite Scroll and wrote a book that sold over 100,000 copies.

Having digested that sample, let’s turn now to Bruce Pascoe, appointed a year ago as Enterprise Professor in Indigenous Agriculture. The university at the time touted him as indigenous, but since he isn’t, the university now just describes him as a “writer and farmer”. He scored the job largely because of his academic and activist groupies. They hadn’t grasped or didn’t care that his Dark Emu account of pre-contact Aboriginal agriculture was a total crock based on his distorting and window-dressing of early explorers’ accounts. Quadrant’s Peter O’Brien documented this with his Bitter Harvest way back in 2019.[1]

In Dark Emu, Pascoe writes of Aborigines living in stone towns of 1000-2000, sowing, harvesting and storing crops and yarding their livestock (wombats perhaps?) in pens. Enterprise Professors are meant to have a trail of scholarly works. The university, on Pascoe’s web page, is forced to pretend that his string of kids’ books about lost calves and fox cubs raised by dingos are “Scholarly Works”. The university can’t even be bothered cleaning up the plethora of typos, which make Pascoe’s entry look like the work of a child or a drunk.

Okay, so Pascoe is no scholarly genius, but what about his “Enterprise” credentials? He’s been trying to grow native grass seeds for flour for nearly a decade, but his Black Duck Foods company (a charity not a business) still offers none for sale. Nor is it likely to sell much, given native seeds have about one-fortieth the yield of wheat.

Another Pascoe company, Gurundgi Munjie, is described in Pascoe’s Dark Emu as

“…a Yuin company on the New South Wales south coast [which] is planning harvests of a number of grains, and early trials of flour production have had spectacular results.” (p214)

ASIC moved to strike it off the register in 2019, and that’s the current status, or non-status, of this “spectacular” enterprise.

Announcing Pascoe’s appointment, Melbourne University was impressed by his corporate accomplishments including “Board member of the Twofold Aboriginal Corporation, Eden.” 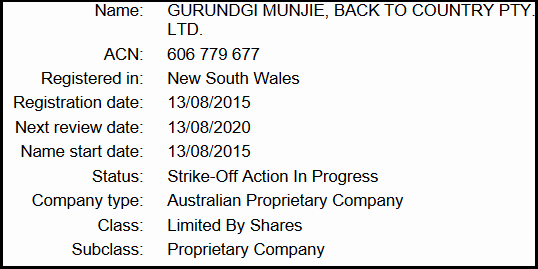 Twofold is a $3 million-income charity servicing the low-income Aboriginal community of Bega Valley Shire, NSW, with housing, aged care and a plethora of other subsidised and disability services.  Sadly for its clients, it’s in a financial crisis, as auditor Colin Salt’s report last March 11 testifies (emphasis added):

Material Uncertainty Related to Going Concern
We draw attention to Note 1 in the financial report, which indicates that the Corporation incurred a net loss of $466,107 during the year ended June 30, 2020, and, as of that date, the Corporation’s current liabilities exceeded its current assets by $542,937. These events or conditions, along with other matters set forth in Note 1, indicate that a material uncertainty exists that may cast significant doubt on the Corporation’s ability to continue as a going concern. Our opinion is not modified in respect of this matter.

Salt also noted that accounts for the purposes of the Aboriginal Corporations Act might not be suitable for other purposes – but this comment seems pro forma.

So what does the ominous Note 1 from the directors, including Pascoe, say in the accounts? It doesn’t look good. (The 2019 accounts reported a loss of $83,398, by the way).

The accrual and going concern basis have been adopted despite the reported loss and current net asset deficiency. This is due to the fact that there have been some significant changes in 2020-21. The loss making project for the Aboriginal Housing Office will be completed and it is anticipated some of the losses will be recouped in 2020-21.

In addition to this the corporation has secured $2.9m in funding for the Jigamy campground upgrade and has another $500,000 in grant applications currently being assessed. Partnerships have also been established with external providers to ensure that future projects are effectively monitored and expenditures are controlled throughout the process.”

There is more explanation upfront in the report of the directors (including Pascoe).

Significant changes in state of affairs

During the 2019-20 financial year, the corporation contracted to build housing on behalf of the Aboriginal Housing Office. This project was still ongoing at 30 June 2020 however it has made a significant contribution to the losses reported for the year. The project will be completed in 2020-21 and there are a number of variations to the contract that will be claimed on completion that we anticipate will allow us to recoup some of these losses.

To paraphrase, finances are precarious but “some” losses might be recouped. Twofold has a new $2.9 million construction job and, with luck and some outside help, the new big job might be better managed than the previous big job and help the corporation towards viability.

The 2020-21 accounts are eagerly awaited but they’re running badly late, which has been the pattern with Twofold.[2]

Just last week Twofold was permitted an extension to file the reports and run an AGM by next January 31. Twofold’s plea was that COVID issues were preventing its auditor finishing his 2020-21 job until November 30. Twofold’s wording suggests it has disengaged from its long-standing auditor at Pambula and has a new auditor working out of Sydney.[3] Mr Salt did not return my calls.

THE next issue is where Melbourne University’s illustrious Enterprise Professor in Indigenous Agriculture sits in this Twofold mess.

Pascoe was appointed a director for two years on December 13, 2019, in the middle of the charity’s annus horribilis. Two directors had just resigned and the chair changed a few months later. It’s possible that troubles were not yet obvious. Only a fortnight earlier, NSW Governor Margaret Beazley had enthused,

As Governor, you really need to know what is going on in the community and take those stories back to the government. If you look at this [Twofold] as a business it is very soundly based – a properly set up board, very strong protocols, its financial position is going from strength to strength, it’s a very focussed organisation.

Might I now please lift the lid on another can of worms out Bega way.

Twofold Aboriginal Corporation has about 135 voting members. The requirement for any members (Article 3.1) is that they be Aboriginal. Bruce Pascoe is listed as a member in the rolls published on February 6, 2020, not long after he became a director. He was still on the roll at September 8 this year.

Given that Pascoe is descended entirely from English stock, according to expert genealogical analysis, how did he jump the hurdle and become one of Twofold’s Aboriginals? As Twofold’s web says,

Twofold is a 100% Aboriginal-owned corporation, where Aboriginal community members both elect and fill the board.

It’s not as if the above requirement is a mere bit of red tape. Twofold has been subjected to several special inspections by the Registrar of Aboriginal Corporations. His delegate, Kevin Vu, on March 11, 2020, reported that management was generally sound and in order, but

Non_Compliance
Contrary to Rule 3.1, the corporation has accepted a non-Aboriginal person as a member. The examiners…were advised at the time that this person was on the register due to work she had previously done in the past for the corporation.

Since the examination the corporation has advised that the member in question will be removed from the register in accordance with section 150-20 of the CATSI Act.[3]

A second clause of Rule 3.1 seems prima facie to create a further difficulty about Pascoe, though he might well have a satisfactory explanation. Rule 3.1 says its Aboriginal members must

normally and permanently reside within the Bega Valley Shire Council Boundary, NSW, and whom has resided in this area for more than 12 months.

The address cited for Pascoe as director in Eden-based Twofold’s books at January 2020 is 1054 Wallagaraugh Rd, Wallagaraugh, Victoria 3891. This is 52km south of Eden town (or 117km south of Bega) and in another state. At August 9, 2021, Pascoe is still cited by Twofold as living at Wallagaraugh.

You’re probably wondering by now what the Twofold charity, opened by Charlie Perkins in 1984, is all about. Its web says (ambitiously):

Twofold manages many initiatives, including community care, cultural learning and exchange, employability initiatives, and commercial ventures for financial sustainability. We invest resources strategically so that Aboriginal people can gain independence and ownership over their future… Recently, Twofold has established an internship program within the NSW Governor General’s (sic) office as well as a ground-breaking partnership with ANU. As we continue to grow, gain recognition, and kick goals for our community, one thing is for certain – watch this space.

It has a valuable stock of 21 community houses managed and maintained for Aboriginals. Twofold, including its Mundabaa Constructions company, has been the largest employer of Aboriginals in the Twofold Bay region.

As an expert and dashing entrepreneur, Pascoe should have known what he was getting into. Let’s hope his insights can help save Twofold and its low-income clients. The last thing Melbourne University needs is more egg on its face over Pascoe. And by the way, the Registrar of Aboriginal Corporations will surely now take a look at, and rule on, Twofold “Aboriginal” Bruce Pascoe’s Aboriginality.

[1] Melbourne University: “Mr Pascoe is best known for his 2014 non-fiction work, Dark Emu, documenting and arguing for the restoration of forgotten food production and land management techniques used by Indigenous communities over thousands of years.”

[3] “Due to the imposed restrictions on residents of NSW by Public Health Orders, it has severely impacted Twofold Aboriginal Corporation’s ability to engage with our chosen financial auditor for this year. In consultation with the Auditor who is traveling from Sydney Metro, we are unable to have the reports prepared until the 30th November, also impacting the proposed date for the AGM.”

Wasting Breath in our Idiotarian Age