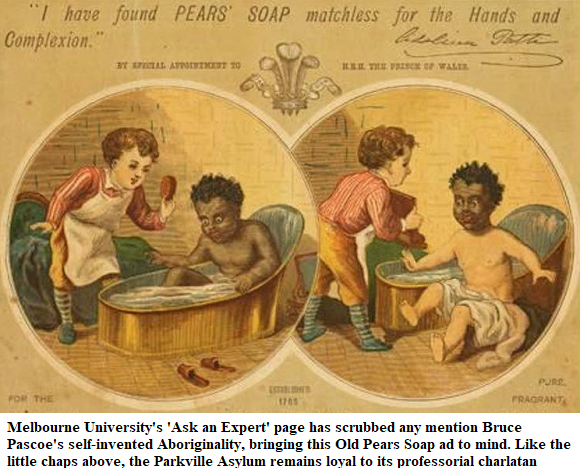 Well, well, well. The University of Melbourne seems to have had taken a marvellous lunge towards reality. It no longer describes would-be Aboriginal Bruce Pascoe, its Enterprise Professor in Indigenous Agriculture, as a member of our First Nations. (Fact check: his First Nation is England, there is no Aboriginal line of descent in any of Pascoe’s forebears).

Professor Pascoe now seems to be just another colonial settler who ought to be feeling guilty towards Aborigines because of his white privilege. Here’s the Professor Pascoe story, for what it’s worth.

Pascoe, the Dark Emu fabricator, is responsible for the faux history bought by 250,000 credulous adults, and Young Dark Emu – a Truer (sic) History (60,000 sales), the latter used in schools to brainwash kids to back a two-class heirarchy for Australian citizens. Pascoe’s dodgy “history” converts pre-settlement nomadic Aboriginals to dwellers in stone-built towns of one to two thousand. He writes of Indigenous farmers sowing, harvesting and storing their crops. We are to believe they kept their livestock (wallabies? wombats?) secured in pens. Colorful, it is. History, it ain’t.[1]

Yet on his appointment as Enterprise Professor, the very first words of the announcement stressed his Aboriginality:

Indigenous author and advocate Bruce Pascoe has joined the University of Melbourne as Melbourne Enterprise Professor in Indigenous Agriculture in the Faculty of Veterinary and Agricultural Sciences (FVAS).

The role, which will sit within the School of Agriculture and Food, has been designed to build knowledge and understanding of Indigenous agriculture within the Faculty and to grow engagement and research activities in this area.

He has published 36 book (sic) including Dark Emu which won the NSW Premier’s Award for Literatur (sic) in 206 (sic)…He has published numerous essays and journalism (sic) both in Australia and overseas. he (sic) is also a farmer and grows Australian Aboriginal Grains (sic) and tubers…

Find an Expert paints Professor Pascoe as the most unusual professor ever to haunt the cloisters and dreaming spires of the university-by-the-Zoo. The institution credits Bruce with 16 “scholarly works”. Its definition of “scholarly” has become elastic, sadly for its alumni and authentic scholars. Pascoe’s Scholarly Works list includes (with my elaborations)

♦ “Fog a Dox” ($19.95). “Albert Cutts is a tree feller. A fella who cuts down trees. Fog is a fox cub raised by a dingo. He’s called a dox because people are suspicious of foxes and Albert Cutts owns the dingo and now the dox. Albert is a bushman and lives a remote life surrounded by animals and birds. All goes well until Albert has an accident.”

♦ Seahorse ($16.95). “Jack and his family escape to Seahorse Bay whenever they can. They spend idyllic days exploring the waters of the bay, diving, fishing and cooking up feasts on the beach. Jack cannot believe his luck when he discovers a sunken boat not far off the coast. He shows his father and they decide to salvage it. But what is the story behind this mysterious boat?

♦ Found. ($24.95). “This gentle story set in the rugged Australian bush is about a small calf who becomes separated from his family.” Keep in mind that Pascoe is a Professor in the VETERINARY and Agricultural Sciences Faculty. His agriculture-and-food colleagues will find much erudition to respect in Pascoe’s scholarly calf studies.

♦ Salt: Selected essays and stories ($26.95) –“…showcasing his shimmering genius across a lifetime of work.” A further blurb says, “The title speaks to memories and ghosts triggered by the smell of salt; its ability to clean, to render flesh and skin from bone, to preserve evidence, to signal cumulative impacts on Country”. For Melbourne University scholarly scientific purposes I think this book should be retitled “NaCl: Selected essays and stories.”

Pascoe’s Find an Expert web page also has a category “Projects” with a zero total. In my scrupulous way I sent the following inquiries to Melbourne University:

On your “Find an Expert” website, you describe Professor Bruce Pascoe as a “writer and farmer”. There is no statement that he is Indigenous. When appointed, you described him as “Indigenous”.

Of the ten works cited, five are fiction books for adults and children. Is it appropriate for Melbourne University to refer to them as “scholarly works”?

2.14.3. An Academic is appointed or promoted by the University, at its discretion, to a particular classification level. Appointment and promotion are based on: 2.14.3.1. merit as determined by the University; and 2.14.3.2. the Academic or candidate demonstrating, to the satisfaction of the University, potential capability and competency to advance through the academic levels.

With commendable efficiency but faint relevance, a reply came a day later from a uni PR Amelia Swinburne:

Here is our statement, which is attributable to a University of Melbourne spokesperson.

The Faculty of Veterinary and Agricultural Sciences appointed Bruce Pascoe as an Enterprise Professor in Indigenous Agriculture to further our work in this area. His extensive knowledge and experience is extending our teaching, research and engagement in Indigenous agriculture. Bruce is a respected member of our Faculty and makes a valuable contribution to our academic community, and we will not be reviewing his appointment.

This reply manages to sidestep every one of my questions. I suspect ambitious uni staff as well as Quadrant readers would be interested in pink-cheeked Pascoe’s precise particulars. Crikey! claims that Pascoe’s weird Melbourne University professorship is at Level E, which according to the university’s enterprise bargaining agreement, yields $200,000 a year if full-time.

The “newsy” element of the university reply is that the university “will not be reviewing his appointment” an obvious question I hadn’t asked. Freudian slip there, perhaps?

♦ Have an eminent and sustained record of peak level leadership, entrepreneurship and influence;

♦ Be widely recognised for their outstanding achievements in industry, business, professions and/or government; and

♦ Demonstrate specialist expertise and a highly developed industry/business knowledge base that matches in breadth and depth what is expected of all professors of the University”.

As a retired Associate Professor of History Les Louis puts it, “However loosely interpreted, Bruce Pascoe does not meet these criteria.”

Roger Karge runs the Dark Emu Exposed website with its wealth of debunking research on Pascoe. Karge graduated from Melbourne University with an honors degree in organic chemistry and has built a highly-successful industrial chemistry business. Karge took up Pascoe-debunking for no other reasons than respect for science and indignation at Pascoe’s blather.

Karge says Melbourne University was formerly populated with “old school” agricultural scientists appointed and promoted by their success in unlocking beneficial secrets of nature, not on the basis of identity and woke politics. These olden-day academics studied and respected Indigenous plant and insect knowledge, and from their findings global industries developed. He instances his 1970s mentor Professor of Organic Chemistry Don Cameron (tenure 1968-2000) MA ScD (Camb) MSc (Qld) PhD (Manc) FRACI. Karge’s own Honours work with Cameron was studying the pigment chemistry of the Australia’s indigenous Lac insects.

Mr Pascoe also sees an opportunity to open the door to greater collaboration with Yorta Yorta people at the Faculty’s Dookie agricultural campus in the Goulburn Valley region. ‘Let’s put our food science there … we’re going to need land and we’re going to need a research facility that is Aboriginal-owned or has Aboriginal management.‘

A lot hangs on who Pascoe means by “we”. Is “we” Pascoe’s private business enterprise or the university or the Australian community? Roger Karge asks why Melbourne University is comfortable with a new professor’s apparent agenda to organise an Aboriginal takeover of Dookie’s public campus on 2440ha, with its venerable history since 1886.

Karge next dissects Pascoe’s record as an entrepreneur, which hypothetically might justify his appointment despite his zero scientific credentials.

In Dark Emu, Pascoe says his yam daisy growing venture started about 2012 (p212), and predicts widespread commercial dissemination “soon”. Nine years later, Karge notes that there is little yam daisy seed to purchase, and those seeds can cost 20c to $1 apiece. Even Pascoe’s own business, Black Duck Foods has nothing under “Shop” except for a sign, “Coming soon.”

…a Yuin company on the New South Wales south coast [which] is planning harvests of a number of grains, and early trials of flour production have had spectacular results. ( p214)

Karge: “The results could not have been that ‘spectacular’ given that the company, which was started in 2015 was by 2019 in the process of being ‘struck-off’ the ASIC companies register, for what ‘business’ reason we can only guess.” (The ASIC page is unchanged at October 2021).

If Melbourne University wish to appoint an ‘Enterprise Professor’, one would expect that they would choose a candidate with a commercially proven background in running an ‘enterprise’ profitably to generate the funds needed to invest in its business, research and development program.

It would be nice to know if Professor Pascoe submitted a business plan to justify the substantial university funds that will be needed to achieve his goals.

With all due respect to Professor Pascoe, he is 74 years old, an age at which most people have retired and yet the University believes he is in a position to head up a multi-decade, difficult project such as this.

The whole indigenous grass-seed-to-bread theory is just a New-Age fantasy of the ‘vory Tower academics of sustainability at the University of Melbourne.

A large scale grain-to-flour industry cannot be developed in Australia using indigenous grasses with their poor protein output. Yields are about 50kg per hectare compared with 2000kg per acre for best wheat, which has much lower unit cost. Another indigenous seed producer, after 25 years’ work, sold seed at hundreds of dollars per kilogram, which makes for a pretty expensive loaf of bread. Melbourne University’s hopes for Pascoe to foster sustainable and low-emission food crops seem chimerical. Apart from the economics, kangaroo-grass cropping requires copious sprays of Roundup and other chemical herbicides.

Pascoe in Dark Emu sets himself up as a pioneer user of Aboriginal plant knowledge, leaving his hugely more successful predecessors unmentioned.

Karge says Melbourne University must be “unbelievably naïve” to swallow such Pascoe’s claims. Leonard J. Webb (CSIRO) half a century ago repeatedly surveyed Aborigines all over Australia on medicinal plants and identified 124 useful ones. The most famous was a fish poison from the bush Duboisia myoporoides. This created the anti-seasickness drug hyoscine (scopolamine), which was given to all D-Day troops to help them fight on the Normandy beaches. Australia today is the world’s largest supplier of hyoscine, an ingredient of Travacalm tablets.

Karge tracks Pascoe’s media presence and finds it has fallen off markedly since the leftist academics Sutton and Walshe, following Peter O’Brien, demolished Dark Emu. However, state education authorities continue to support schools indoctrinating kids with Dark Emu nonsense, and this year Pascoe even became joint winner[4] of the Australian Humanist Award of 2021. CEO of Humanists Australia, Dr Heidi Nicholl explained, “Humanism is a framework for living an ethical, meaningful and compassionate life without relying on supernatural forces.” She cites Pascoe for his outstanding achievements ‘through a First Nations lens’ — as if Aborigines were uninterested in the supernatural.

It’s good to see that Bruce at Melbourne University is not letting the (kangaroo) grass grow under his feet. I’ll check with the PR people in a few months to see if they’re still “not reviewing his appointment”.

[1] Professor Geoffrey Blainey: …the famous explorer Thomas Mitchell…never once used the word thousand. The word thousand seems to have been made up. It’s a terrible mistake and it ruins an important part of his [Pascoe’s] argument. There’s no evidence that there are Aboriginal townships with permanent houses, dependent for most of their food on agriculture. There’s just no evidence for it.’ — Blainey 19th August 2020 – listen here from 2:57

Hold the Nachos, You Down Dogs, You

#1 With A Bullet in North Korea