You, too, Can Sleep with Daniel Andrews 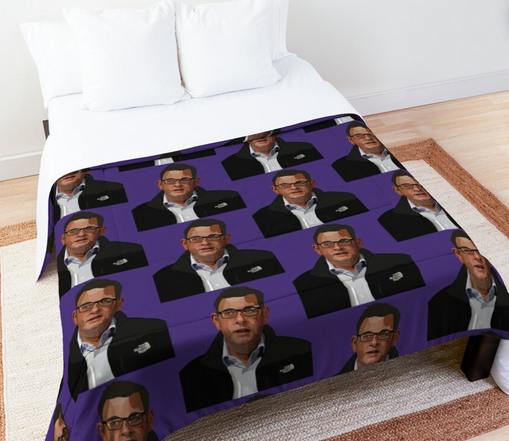 Can’t think what to give rellos for Christmas? Here’s your answer, ladies (and some gents): a Comforter throw-quilt with a mosaic of  portraits of Victorian Premier Dan Andrews in his favorite North Face jacket. The artwork is labelled with his reasonable view of us plebs, ‘I’m not angry, I’m just disappointed’. 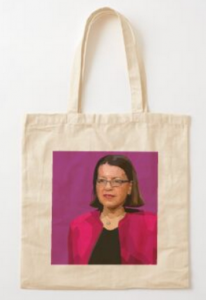 If your Dan Andrews comforter gets soiled, don’t worry, it’s “machine washable. Pillows and shams not included,” says her ad on redbubble.com (not to be confused with redtube.com under any circumstances!). And keenly priced at $168.03. Quadrant blokes might go for a Throw Blanket with its mosaic of Jenny Mikakos, or a tote bag with Mikakos portrait  (left) for your next solo shopping trip to Woollies under Lockdown Stage 4. (Bodyguard not included).

Victoria’s Chicom-flu adviser Brett Sutton is popular on Ashley’s mugs and phone covers. As she wrote, “My first order of Bretty things just arrived from Redbubble! I could not be more thrilled with the quality of this art board print. I have also heard that mugs have started arriving which just makes me impossibly happy!”

Naturally I sought via email a prank interview with artist Ashley, but she wasn’t born yesterday and replied asking what sort of a publication Quadrant was. I explained that it was a brainy supporter of progressive causes but still heard nothing back. 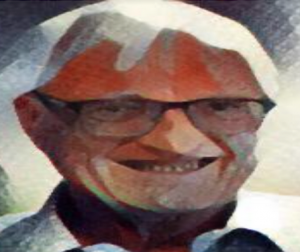 Good on Ashley for running a creative small business through her art. Inspired, I tried doing an art portrait of myself, using my Quadrant photo, and got the result at right. The process involved an onerous  three-minute googling of iPad-art software and five-second conversion of my photo to David Hockney or Francis Bacon mode (the modern one).

It’s a cinch now for me to go commercial with it. A Tony Thomas comforter or throw blanket for the ladies, or  Tony Thomas laptop skins for blokes. All I do is send the pic to redbubble.com (a Melbourne-based global group, market cap close to $1b) and they’ll brand about 60 items and get third-party suppliers to manage my e-shop. Since the depth of the ChiCom virus, Redbubble shares have soared 450% to $3.50 so it’s happiness all round, except among Australia’s non-government workers and businesses.

There are two types of humans in Victoria: homo sapiens and Dan Andrews supporters. The latter are likely to re-elect Dandemic Dan and his bevy of branch-stackers, union satraps, tax-squanderers[i] and idiots in 2022. As another Victorian, the pseudononymous Tom Collins (real name Joseph Furphy) put it more than a century ago, “Such is life.”

[i] On election in 2015, Premier Dan ditched the East-West tunnel project to oblige greenies, and paid the contractors $1.1 billion compensation.

The Dizzy Doctors of the COVID Crusade