The Discovery of Palmersaurus Rex

In all my years as a palaeontologist, I have never seen anything like it. Our team of fossil hunters had been prospecting for only fifteen days at a secret location near the Molonglo River, but already we had discovered a veritable graveyard of intact fossils – and the partial skeleton of a hitherto unknown political party. Nothing, however, could have prepared us for what unfolded that cold mid-winter morning at the Cuddly Clive and Burley Griffin digs. It was a long time coming, but worth the wait.  Nature – like life and elections – is full of surprises.

We worked with chisel, pick, and bulldozer at the two sites over several weeks. What we found near the unconformity between Old Rudd Sandstone and Gillard Mudstone – and under a thick layer of stale Hansard, ghost-written memoirs and remaindered copies of My Way or the Highway – was not just a body count of old dinosaur bones. Little did I know it, but we were about to learn what the beasts ate, how they interacted with other species, and what caused their gruesome and untimely deaths.

It was just as well. A few of the volunteers were beginning to worry whether sleepless nights, dust-choked days, discarded Wild Duck takeaway cartons, empty Fat Yak pale ale bottles, Mortein canisters and other items of personal hygiene, might be all they would have to show for their efforts. But as soon as I laid eyes on the unique gastrolithic accumulation in its fossilised rib-cage on 1st July, it was clear we had stumbled on something special – and scary. A new creature had entered the antipodean dinosaur-space. It was a beautifully preserved skeleton of Palmersaurus rex coolumi (Kile, et al, 2014).

Rumours had been circulating for years about the existence of this species. But only a few excitable under-graduates took seriously the possibility of a creature at least twice the size of Tyrannosaurus rex (“tyrant lizard king”) – the first bones of which were found in 1902 by Barnum Brown at Hell Creek, Montana, USA – and ten times as tyrannical, with an estimated bite-force of 25,000 newtons (Erickson, et al, 1996).

The 1994 discovery of a Giganotosaurus (“giant southern reptile”) in Patagonia intensified the speculation. This enormous theropod dinosaur was slightly taller than T. rex (3.9 metres at the hips) and weighed about 8 tonnes. With a brain the size of a Queensland banana, it lived during the mid-Cretaceous period, 100 to 95 million years ago, in what is now South America.

P. Rex, however, was a more powerful predator, with a formidable jawbone of cone-shaped serrated teeth. Like modern meat-eaters — and some members of the Senatosauroidea family – it ate anything it could catch. It also snacked on the bones of deceased prey, stones from rocky outcrops and stream beds, sometimes just roaring and ‘chewing the air’ in aggressive displays of territorial machismo. Oddly, however, its arms were about a metre long, and it had only two-fingered “hands”.

Recent biomechanical work done at the University of Lagado based on limb proportions suggests P. Rex may have been able to sprint at 50 kilometres an hour, a speed that would have easily exceeded its herbivorous contemporaries. (Speed, of course, is not the only factor in predation. Acceleration, stealth endurance, agility, experience and guile – all of which are difficult to quantify – are also important, as are prey availability and vulnerability.)

The specimen unearthed at the Cuddly Clive pit contained some remains of a mature Troodon Willeseesus channelisepteri. One of the smartest of the small dinosaur species, Willeseesus had a large brain relative to its body mass. This two-metre long dinosaur viewed the world through unusually large eyes, giving it superior depth-perception and successful hunter and interviewing skills. But this one was not smart enough to avoid a grim fate. It remains an open question, however, whether the prolific media-barbs along its spine were poisonous, and ultimately contributed to its host’s demise.

A 7.62mm calibre M60 machine gun was found near the Jacquisaura, along with several belts of NATO 7.62x51mm cartridges. Engraved on one side of its barrel (in English) was the expression: “Praise the Lord and pass the ammunition”; and on the other: “God help the voters of Braddon.” Given the hundred-million-year age difference, we concluded this was a more recent artefact, probably disposed of by a recalcitrant ex-soldier from the nearby Molonglo military base. 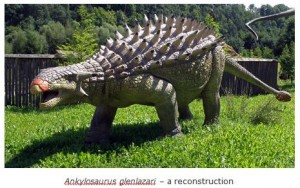 A Coelophysis amicaplamera rickymuiri (‘silence is golden’) was also unearthed, together with a large deposit of kangaroo-like coprolites. Only a little larger than a turkey, it had a long and slender tail and dozens of knife-edged teeth. Perhaps a fish eater, this Senatosaurid therapod generally kept to itself, living quietly along streams and among estuarine vegetation.

Our first hypothesis was that they all died together from a flood or climate-change catastrophe. But the strange lack of pelvic bones at the site forced us to discard it. These poor creatures were also innocent victims of a large scavenger, probably shortly after entrapment. While the 100-million-year-old case was cold, we found critical clues that pointed to its identity – P. Rex.

The killer of Willeseesus and the small Burley Griffin dinosaurs was not indiscriminate. P. rex had carefully selected its victims – based on size, gender, culture, taxonomy, habitat, ideology, state-of-origin, taxable income, synaptic density and capacity to adopt a persona consistent with Senatosaurid herd behaviour. No evidence has been found, however, to support diseased-based, dodgy-dealing, ego-massaging or back-scratching scenarios – at least not yet.

So what killed this P. Rex? Extraordinary claims require extraordinary evidence. Careful scientists know – like the anthropogenic chaps over at Club Climate – that they should make every effort to disprove their cherished hypotheses before claiming they are true, especially in controversial cases. Loyal servants of the truth – whose objectivity has not been corrupted by dodgy research grants or post-modern preening within the Academy – we have followed this procedure here.

There has been a suggestion that the demise of our P. Rex was the work of a gargantuan Abbottosaurus (aka the AbbottAbbottAbbott monster). But we have seen no evidence confirming the latter’s existence. Yet one was featured in a recent episode of the national television series Dining with Dinosaurs, where it was claimed to be 25 metres long and weighing up to 150 tonnes.

A giant Abbottosaurus was shown attacking and devouring a theropod dinosaur, Eustreptospondylus, before becoming beached during a typhoon and suffocating under its own weight. Two adult Eustreptospondylus, ironically, survive the storm and were depicted feeding on its carcase. (The likelihood of a fictional Abbottosaurus leaping on land to catch land-based prey is somewhere between speculative and silly, so we referred the case to Media Watch.)

There is a less fanciful explanation, one based on the facts. While some features of P. rex biology – such as colouration, vocalisations and mating displays – will remain mysteries, knowledge of its feeding behaviour fortunately is accessible to us through the fossil record.

According to an expert in dinosaur digestion from Museum Victoria:

“We can learn about what dinosaurs ate and how they digested their meals by examining stomach contents preserved in some specimens and by peering into their fossilised dung [coprolites].”

“Carnivorous theropod dinosaurs relied on powerful stomach acids to break down their meals. Their blade-like teeth acted like shears, slicing out chunks of flesh that were swallowed whole. Some predatory theropods had specialised teeth that gave them a powerful, bone-crushing bite, such as those of Tyrannosaurus [and Palmersaurus].”

The serendipitous discovery of a very large coprolite (pictured above) near the P. Rex skeleton provided crucial evidence. We were able to determine the composition of its last snacks with great precision by “peering through” the fossilised dung (Kile, 2014).

The carnivorous theropod dinosaur Tarbosaurus, a close relative of the famous Tyrannosaurus. The teeth of these dinosaurs helped tear chunks of flesh out of their prey.Source: Museum Victoria

Coprolites from meat-eaters are often rich in calcium phosphate from the bones of their victims. Until our 95cm find, the largest known dinosaur dropping was 44cm in length. Thought to have come from a T. Rex, it was 50 per cent bone fragments (Chin, et al, 1998).

Our case, however, was different. The Cuddly Clive P. Rex was atypical. It was not a victim of natural catastrophe or old age, but met a premature end due to its high (> 50 per cent) consumption of iron-oxide in the form of gastrolithic magnetite. Surprisingly, analysis of its stomach and stool also revealed that both contained at least 20% elemental gold, presumably eroded from nearby auriferous-vein deposits and washed into stream beds, where its reflectivity probably attracted the creature’s attention.

In an age of gobsmacking gluttony, this prehistoric parable may have some lessons for anatomically modern Homo sapiens (AMHS) with nervous dyspepsia, and members of the Senatosauroidea family anxious to avoid terminal indigestion. Chose your friends with care; be calorie-conscious (look for the Naturally Organic label); go easy on iron-rich gizzard stones and heavy metal; and above all, don’t bite off more than you can chew.

The Unelected Can’t Wash Their Hands