Lost in a Wilderness of Models 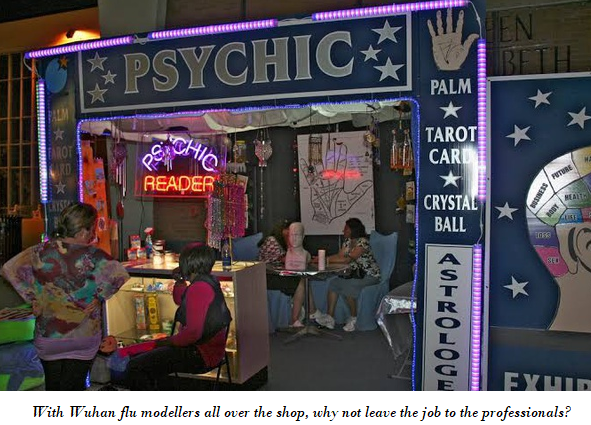 Last Friday’s Daily Telegraph had a curious story (paywalled, so no link) by reporter Anna Caldwell.  Here is an extract (emphasis added):

The latest health modelling, held at the highest levels of the NSW Government, shows that on our current trajectory virus cases will not peak until sometime between November and February.

The theory in the modelling is that we have been so successful in suppressing the spread of COVID-19 that we have elongated the tail of this virus.

On current modelling, that so-called “peak” in November would only see upwards of 500 people needing ICU beds.

It’s a dramatic improvement on the do-nothing but tell people to wash their hands approach, which the modelling says would have swamped our health system with 4500 people needing intensive care by July when we only had 1100 beds.

It’s also an improvement on the scenario we faced by late March when we’d simply decided to stop mass gatherings but not yet implemented the stay-home edict and shut down restaurants and cafes. Under that scenario 2500 people would have needed ICU by August.

Again, this would have swamped our health system and we would not have been able to care for everyone who needed it.

The current restrictions push the peak back so that just 500 people need the top level of care by the end of the year.

The reference to modelling being held “at the highest levels of the NSW government”, implies this is Macquarie Street modelling. I can’t find any reference to it, which suggests it is being kept under wraps. We’re all in this together, we are told without respite, but we’re also not to be trusted with information and analyses our masters orchestrating this escalating destruction of the economy believe will upset the simple-minded souls whose taxes pay their salaries.

The latest publicly available Commonwealth Government modelling was released on April 6. It includes this disclaimer, prominently displayed in its own cartouche:

There are still things we don’t know. Modelling does not predict the future. It is a tool to explore scenarios and the impact of actions we might take.

2/ the effect of appropriate quarantine and isolation measures

3/ the additional impact of social distancing.

Got the picture?  Don’t put too much reliance on the model, which is best summarised by a graph showing peaks as follows:

The modelling up until now has looked at hypothetical scenarios and focused on health system capacity. The next phase is to put Australian data into the model and see how it aligns to our actual experience.  As more ‘real’ data is put into the model its accuracy improves.

In other words, short on data and, as a consequence, hopelessly unreliable.  No date is given for when the updated modelling might be available. By way of contrast, the model cited by The Telegraph‘s Caldwell predicts:

Even allowing for the fact that it apparently refers only to NSW, it is considerably less alarmist than the original Australia-wide modelling. So, is this the ‘next phase’ modelling referred to above?  If so, there are key questions: Why is it apparently the preserve of the “highest levels of the NSW government”?  What is its provenance?  Is it being used as a basis for planning by the NSW government?  Does it have any standing within the Commonwealth Government?  Has it been made available to the National Cabinet?

Whatever the answers, it does not appear to resemble anything remotely like the real-world outcome we have seen, in which the peak of infections has already been relegated to the past. It can only be predicated on the ‘second wave’ theory – the one  you can’t kill with a stick.

At this point, let me digress slightly and talk about the term “social distancing”, since it is a critical element in the modelling equation.  I have observed elsewhere that I find the term more than uncomfortably Orwellian. It is a lot like its close cousin, “climate change”, which was Victorian Chief Health Officer Brett Sutton’s alarmist preoccupation until the Wuhan virus came to town, in that its bland face conceals a multitude of sins. Ask ten Australians what ‘social distancing’ means and nine of them will tell you ‘keep 1.5m away from other people’. The tenth will tell you it includes closing parks, beaches, pubs, cafes, air travel, businesses in general, not going for a ride in your car, not visiting your family as well as a host of other, previously unimaginable curtailments.

The point of the above rant is that if we are going to continue with this exercise of modelling, given that quarantine and isolation are pretty well defined and would be included in any scenario, it would be necessary to refine ‘social distancing’ to present a variety of options and model those.  The model that Caldwell quotes is meaningless unless it defines what it means by ‘social distancing’.  ‘Social distancing’ meant one thing on March 18 and something different seven days later.  It means one thing in Queensland, something different in Victoria.

The truth is this: we now face a deadly and delicate highwire act to bring forward the peak of this virus yet not let the thing run wild.

At the moment, we are right to be stunned and thrilled by the extraordinary low case numbers we are seeing across the country.

In NSW, we had just five new cases yesterday. Other states had zero.

Some believe that this stunning ­reduction in cases means we are in striking distance of eradicating the virus.

Knowledge is power, and ­increased testing will mean we will know when the beast is stirring and where.

The challenge now is to get this gentle wind-back right in a way that doesn’t send our problem skyrocketing like other nations.

Border controls will stand us in good stead. But complacency will be our enemy.

While some mistakenly look to our low case numbers and believe we have overcome the biggest hurdle, the opposite is more likely true.

Our challenge is only just ­beginning.

She seems to be saying that even if we keep current restrictions in place until November we will still see 500 critical patients at that time.  If you extrapolate Caldwell’s figure across the country, that would be some 2000 ICU beds required.  This is completely at odds with Commonwealth government rhetoric.  And that of the NSW government for that matter.

What is going on here?   At the very least, this conflicting information will certainly confuse Daily Telegraph readers, — aren’t we all of us confused enough already? — and make it even harder for governments to cut through if, and when, they attempt to articulate some concrete and comprehensive plans to get us back to normal.

In the State You Will Trust