A Sleepwalker Stumbles on the Right Answer 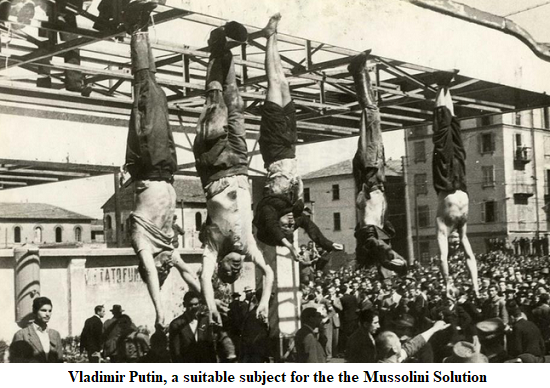 As I write there are signs that Putin may be prepared to limit his ambitions and settle for some portion of east Ukraine.  President Zelensky may be prepared to accept a compromise of this nature simply in order to ease the suffering of his people.  That will ease the immediate human problem but the issue will not be resolved.  Putin’s long-term ambitions will not be assuaged.  Ukrainian resentment will not abate.

But, more critically, Putin has undoubtedly committed war crimes.  Arguably he has committed them before, but this time the West in its customary impotence cannot credibly turn a blind eye.  Could it allow a Putin dominated Russia to remain on the UN Security Council or any other UN organisation?  Could it refrain from prosecuting Putin in the International Court of Justice?  Could it allow Russia to compete in sporting events?  Can we continue to indulge Putin continuing to thumb his nose at the world?

Putin cannot be allowed even the semblance of a victory – we cannot think that if we allow him a face-saving compromise that will be an end of the matter.

Of course, yes, we tolerate murderous dictators all the time as long as they confine their atrocities to their own people.  But pragmatic indifference can only be stretched so far.  This time Putin has gone beyond his own borders.  Surely this is a red line we cannot compromise.

Putin must go, and obviously invading Russia and forcibly removing him is not a viable option. So, we must rely on Russia dispensing itself of the services of this abominable man.  If he prevails at all in Ukraine, if he is allowed to retain even the tiniest morsel of territory, the chances of him being removed are possibly an each-way bet at best.    But if he is massively defeated in Ukraine, the chances of him surviving are that much lower.  This includes recapture of all disputed areas, including Crimea.

This suggests serious boots-on-the-ground intervention on the part of NATO sooner rather than later.  The future of the separatist Donbas region must be decided by negotiation after the hostilities have well and truly ceased.  Ukraine may have to make some compromises there, but not with a Putin-led government. NATO could insist, as part of its intervention, that the status of the Donbas region be resolved to the satisfaction of both parties, and that the resolution would be enforced by NATO if necessary.  Crimea should be returned to Ukraine in total.  And there is also the question of reparations for Ukraine.

There is no doubt that militarily NATO could eject Russia from Ukraine pretty swiftly.  But there are two complicating factors.  The first is the potential to draw China into the conflict.  I think that is highly unlikely. Putin will have lost huge face in China.  China might be prepared to withhold condemnation and even to militarily reinforce success on the part of Russia.  But why would it buy into what is now clearly a geopolitical and military disaster?  Beijing certainly won’t be inclined to reinforce failure, as there would be no upside for China other than the remote possibility of turning Russia into its vassal state.  In China’s foreign policy imperative rankings, self-interest takes gold, silver and bronze.  If, as has been suggested, China was using Ukraine as a test case for Taiwan, then surely the West should send them an unequivocal message.  They will not be unduly intimidated by a response based largely on economic sanctions.

And of course, there is the possibility of nuclear war.  Joe Hildebrand recently published a very insightful column (paywalled) explaining why Putin has no fear of the West.  He says, in relation to the Cuban missile crisis:

It was an extraordinary victory for world peace, yet it was only possible because of the threat of world war.

The problem for the current US president is that he has already taken that threat off the table, publicly declaring that he will not risk any direct confrontation with Russia.

“Direct confrontation between NATO and Russia is World War 3, something we must strive to prevent,” Joe Biden said last week.

Of course that is absolutely true and that is exactly what he should be doing. But just because he is doing that doesn’t mean he should be saying it …

If NATO were to intervene and confine itself to Ukraine, what are the odds Russia will initiate a nuclear response?  Putin might possibly use tactical nuclear weapons on the battlefield but that would be met with an equal response and would be manageable.  The real threat is, if cornered, Russia resorts to a strategic nuclear response targeting, say, Munich or some other significant European target.  If such a course were proposed, that might be the time when Russian pragmatists decide that Putin’s time has come.  They would know that such a course would invite a swift retaliatory response, probably on Moscow. It is likely that the Russian High Command, such as it is, would baulk at this. Still, it’s undoubtedly a risk.

How could this intervention legally be achieved?  Zelensky could make an application for immediate entry to NATO.  Assuming the normal bureaucratic obstacles could be overcome – the primary of which is that hitherto Ukraine has not been judged squeaky clean enough – on the basis of the exceptional circumstances applying, membership could be granted in a matter of days.  Yes, I am oversimplifying this.  Whether all NATO members, particularly Turkey, could be induced to sign up for this adventure is problematic and no doubt there are other obstacles.  And, while Ukraine is not currently a member of NATO, it is an independent nation and a member of the United Nations.  Surely that counts for something?

Having said that, the following extract from Breitbart is telling:

“For God’s sake, this man cannot remain in power,” Biden cried out as he finished his speech. “God bless you all and may God defend our freedom.”

It was unclear whether or not Biden’s comment was part of his prepared text.

“The President’s point was that Putin cannot be allowed to exercise power over his neighbors or the region,” a statement attributed to a senior White House official read. “He was not discussing Putin’s power in Russia, or regime change.”

For once, Sleepy Joe is ahead of his minders.

I am just an armchair strategist and I recognize I have presented a simplistic argument.  I imagine there will be considerable legal and political impediments that would need to be overcome.  But, in principle, I think this is our Munich moment.  Whether the powers that be have the courage and foresight to seize it, remains to be seen.

22 thoughts on “A Sleepwalker Stumbles on the Right Answer”

Kneeling Before an Altar of Lies