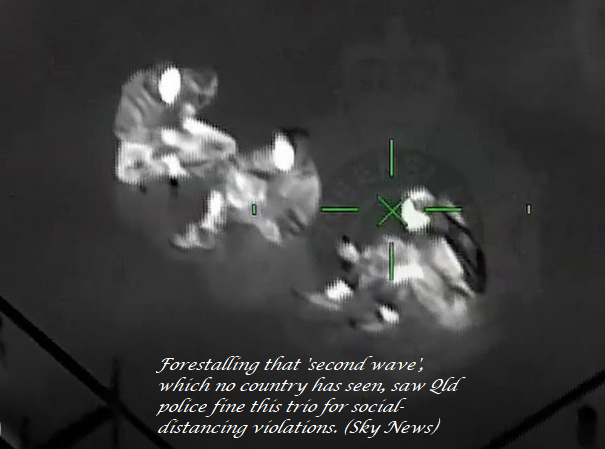 At the beginning of this Wuhan virus crisis the predictions about the deaths it would cause were dire.  ‘Millions will die’, we were told, and reacted accordingly. Well, hasn’t happened, particularly in Australia, where it appears we now have it firmly under control.

But wait, we are now told, we must not get ahead of ourselves.  We can’t afford to ease ‘social distancing’ until we are totally prepared for a second wave, such as has occurred in other countries.  I have argued here that no country has experienced as second wave, yet Singapore continues to be cited as one such example.  Andrew Bolt referred to it twice in recent programs.  This is not Andrew’s claim, I hasten to add.  He is merely quoting the claim of one of our vaunted  ‘experts’.

The indications are that this virus will take its course no matter what individual countries do.  Every country, regardless of the nature of its response, has seen a steep rise in infections at some point along the horizontal time axis, followed by significant decline to a steady low daily rate.  No country has experienced a ‘second wave’ ie,  a significant and sustained increase in  cases following the decline. Here is the daily infections graph for Singapore:

Yes, they delayed the onset of the steep curve longer than many, if not most, other countries, but they are now right in the middle of that phase, i.e. their first wave.

As reported in The Australian:

Now an outbreak in the crowded dormitories of its migrant labour­er underclass has blown out its caseload and exposed an epidem­iological and social blind spot that threatens to push the city-state’s health system to the brink of its capacity.

Of the 9125 COVID-19 cases confirmed in Singapore, 7066 are foreign migrant workers living cheek to jowl — as many as 20 to a room — in mass worker dormitories that a good number of Singaporeans never knew existed.

Significantly, however, from over 9,000 infections, they have had only 12 deaths, which surely is the most important metric.  So they must be doing something right.  But their situation is by no means analogous to that of Australia.

Taiwan has probably been the most successful country at containing infections, a tally currently running at just over 400 cases and six deaths.  Here’s the graph, which also shows the ‘curve’ or first wave: 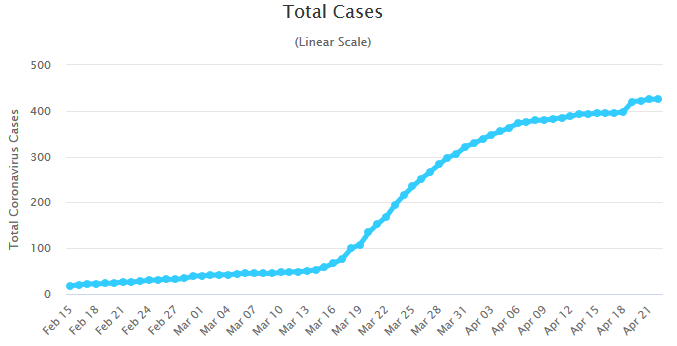 I have examined the daily infection rate graphs for the 78 most affected countries (except China because no figures emerging from the Middle Kingdom can trusted), i.e. those which have recorded more than 1,000 cases.  I reiterate that not one of them has experienced a ‘second wave’.  I categorized those countries roughly as ‘rate of infection still increasing’ – 18; ‘rate of infection stalled at peak’ – 29; and ‘rate of infection declining’ – 26. Only Australia, Austria, South Korea, Iceland, New Zealand, Hong Kong and, of course, Taiwan could be said to exhibit a sustained flattening of the curve.

So, if we are to have a ‘second wave’, it won’t echo the experience of any other country to date.  But where might it come from?  Is there a large pool of unsuspected asymptomatic cases ready to unleash itself upon us sometime in the future if we let our guard down?

As recently as April 16, CMO Brendan Murphy stated that ‘Australia’s effective reproduction rate at the moment is about two and half, and that it needs to drop below one’.  A couple of days ago, PM Scott Morrison stated, in his press conference, that one of the conditions for an easing of restrictions was that the reproduction rate needed to come down to one.   Both are being disingenuous.  If our reproduction rate (termed R0) were above one we would still be seeing an increasing infection rate, either linear if 1, or exponential if >1.   Right now our R0 is well below 1 which hardly presages a ‘second wave’

I have argued that the stage one restrictions imposed on March 18 would have been sufficient to achieve the success Australia has enjoyed in containing Wuhan, since our decline in the rate of infection commenced within less than a week after they were imposed.

It is, of course, possible that the rate of infection might increase again sometime in the near future but probably only in one or two hotspots, not across the country.  If relaxation of restrictions leads to an increase in infections it will start as a trickle and be eminently manageable.  It won’t be an uncontrollable wave — and it won’t be all that disastrous, other than to impose an additional burden on our now well-resourced hospital system.  What it definitely won’t do is send the Grim Reaper rampaging through our vulnerable population, who are now very well prepared and accustomed to protecting themselves from the Wuhan virus.  The few deaths that may occur will be overshadowed by the normal death rate from flu.

And now that the hospital system is well prepared to treat infection, isn’t prevention of unnecessary  death the only other imperative that would justify prolonging these oppressive and economy destroying restrictions?   Other, of course, than to prolong the crisis long enough to blunt the perfectly valid criticism that governments at all levels in this country massively over-reacted to a threat they didn’t take the time to methodically assess.

Finally, let me hammer home the point: it is prevention of deaths, not infections per se, that has caused us to cripple our economy.

19 thoughts on “That Elusive ‘Second Wave’”

The Pointless Push To Restore ‘QC’

Seen from the US