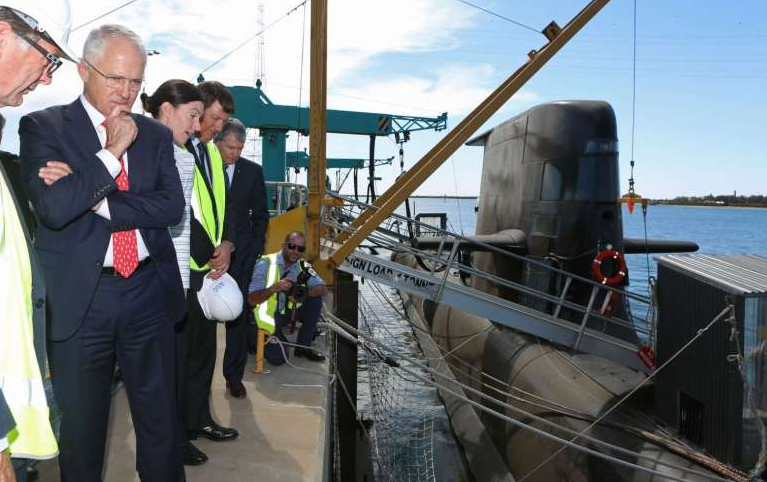 Over the years I have witnessed both good and bad decisions concerning the structure and equipment choices made for our defence forces.  Some of the bad ones were made for reasons of expediency, due to budgetary considerations or by political direction. Only this last category partially excuses the military hierarchy from accepting full accountability for placing the national survival of Australia at risk through the failure to determine the requirements and then provide a viable, survivable and credible defence capability.  Today we have former admirals seriously advocating climate change as our greatest threat.  Not an aggressive and expansionist China, not global jihad and terrorism, not a nuclear armed North Korea. Sadly, such is the prevailing mindset these days.

This delusional thinking by senior officers and politicians outside the war-fighting box has led to a whole spectrum of failures to provide our military with the best people and equipment available.  The F-35 Joint Strike ‘do-everything, but do nothing well’ first line of air defence was a very bad decision, one I thought could never be topped. But I was wrong. The French Shortfin Barracuda submarines we have on order leave that earlier acquisition in the shade.

Submarines are no longer the Das Boot-style hunters of slow cargo ships, but are themselves the hunted, as dangerous to those who sail in them as to those they target. The anti-submarine warfare (ASW) capabilities of advanced nations are now so good that submarines are on virtual suicide missions, the best result likely to be one kill before their own crew’s next-of-kin are notified.  The statistics concerning their effectiveness on a risk-benefit analysis are not good.  There were ‘happy times’ for German U-boats in the early part of World War Two until ASW defences became well organised.  After that their effectiveness was limited.  Germany, with the largest, most technically advanced and aggressive submarine fleet found that none of those qualities was any protection. In the last 30 months of the war they lost a staggering 616 submarines!  From the beginning of 1943 until May 1945 an average of two boats went down every three days.  In four of those months they were losing more than one boat a day.

Australia currently has a fleet of five operational conventional submarines, though finding crews to sail them is proving challenging. How much harder will it be to find crews for twelve outdated diesel-electric boats that must regularly expose themselves while their batteries are being recharged?

Just for argument’s sake, let’s posit the nuclear-powered Barracuda as the best submarine in the world (please stop laughing;  we’re talking hypotheticals). But we aren’t going the nuclear route. What we are doing is asylum-quality crazy: ripping out the reactor and replacing it with an old fashioned diesel. Our alleged ‘state of the art’ submarines will have 80-year-old technology driving them at 35 per cent the underwater speed of a nuclear Barracuda. And that is but the start of the problems.

This will then require new space for fuel, plus a re-balancing of the whole vessel in order to maintain underwater trim, and all the plumbing required to achieve this. All this to be achieved in 14 years?  That whooshing sound you hear is the pigs flying by. Were this but another case of squandering billions of dollars on the wrong weapon, then that would be regrettable but understandable. We have seen such folly many times before. Unfortunately, at this point the situation deteriorates.

Long after cavalry had become ineffective, horsed regiments and horse-mounted cavalry continued to exist in armies.  The last charge by sabre-wielding cavalry is reputed to have been in 1939, when Polish cavalry took on German tanks.  It did not end well for the Poles. Bravery is no antidote to bullets.

Australia is staking $200 billion of its meagre defence budget on an unproven design that can only produce an outdated weapon, the first of which will not be available (if you believe in fairy tales) for 15 years.  Let’s assume the fleet of twelve all arrive by 2050, and that our enemies are sufficiently considerate to delay hostilities until then.  What are the chances our boats, led by HMAS Pyne Box, will deter our enemies?  These new boats will be quieter, able to dive deeper and will have new capabilities, but they will still not be able to function in tomorrow’s undersea battle space.  By 2035, there will be a range of rapidly evolving autonomous submarine weapon systems, such as the recently unveiled Chinese HSU drones pictured below, that are designed to find and sink them. And find and sink them they most certainly will.

What is the Future for the Submarine?

In the Fifties it was recognised that the concept of wolf packs hunting freighter convoys was no longer viable. To continue to have a role, the strategy of submarine warfare changed with the introduction of nuclear-powered, nuclear-armed ballistic missile submarines designed to annihilate any country that made a nuclear first-strike on the US or its key allies. A second class of submarine also emerged with the creation of the hunter-killers designed specifically to find and destroy enemies’ submarines, including their ballistic-missile ‘big bangers’. A game of cat-and-mouse between the USSR and the US was played for decades with ever more sophisticated electronic and acoustic systems and devices introduced.  Among these was a sonar array stretching from Greenland to Norway capable of detecting any Russian submarine passing through the Greenland Gap and into the North Atlantic.  An American hunter-killer submarine would then be assigned to shadow it.

Strategic naval planners have recognised these difficulties and proposed three solutions to permit undersea warfare to continue without incurring the level of casualties suffered in World War Two.  These are:

2/ Manned mother submarines equipped with standoff ‘smart torpedoes’ that can strike at distances of up to 60km; and

3/ Swarms of robotic mini-torpedoes and mines

In 2000, the USN Research Centre launched the experimental USNS Cutthroat (below) a scale model of the new Virginia Class attack submarines.  Cutthroat is fully autonomous in carrying out its missions of testing new equipment and sensors, but it is unarmed.  There is little information available but it safely can be assumed that the arming of future unmanned operational craft has been addressed for use in high-risk areas. 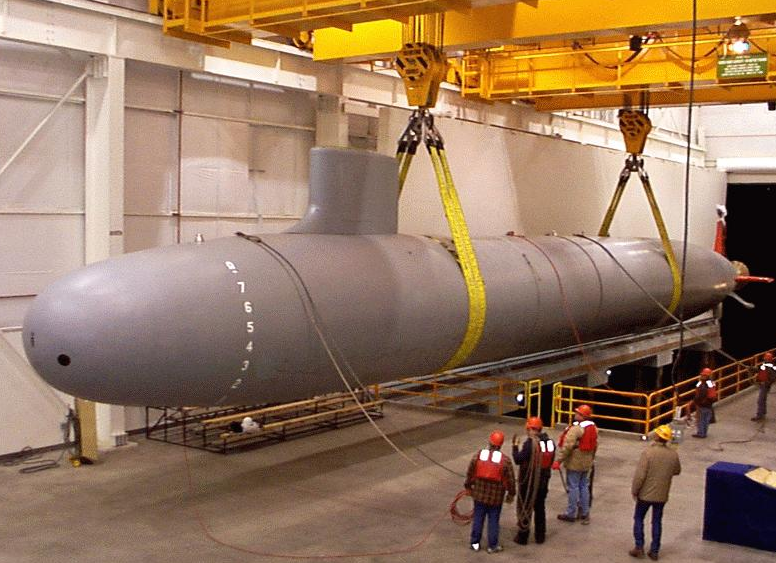 Meanwhile, China has been deploying seabed sonars to detect vessels passing above them, making the South China Sea a difficult environment for submarines to operate. The confined space and relatively shallow waters of the South China Sea means that using drones and unmanned craft to carry out missions is becoming a necessity.

As the information a submariner must process to survive in an increasingly hostile environment grows, many of the most highly-skilled jobs are being replaced by AI and automation.  Today’s undersea craft rely more than ever on automated systems, and this means the roles of the submarine and submariner are changing in fundamental ways.

Unmanned aerial drones have evolved considerably during the past 20 years, but unmanned underwater vessels (UUV’s) are still marginal players in sea warfare. To date, their role has been deep or hazardous operations, such as hunting mines. With the development of powerful computers, networking technology and air independent propulsion (AIP), their role will soon be capable of expansion as they evolve from remotely piloted drones into fully autonomous craft with little or no requirement to report back to their command base for instructions.

With the growing sophistication of AIP, UUVs have the potential to become larger, giving them the capability to remain undersea for months at a time without human intervention.  Initially, the first UUVs will simply be auxiliaries to manned submarines or smart-weapons networks.  Roles will include mine hunting and disposal, operating close to enemy coasts, or acting as decoys to mask the mother submarine’s movements.  Over the next two decades we can reasonably expect to see them become fully autonomous units equal in capability to manned submarines. UUVs will also be much cheaper than manned submarines, meaning they can be deployed in greater numbers and without the same degree of regard for risk that figures when a crew is involved.  New weapons will further enhance their capabilities.  A number of the US Navy’s Common Very Lightweight Torpedo (CVLWT), could be carried by a UUV and used to engage targets from closer range than a manned submarine could approach.

By 2040 at the latest, the vulnerability of surface fleets may require them to stay much farther from littoral areas.  This is already a major problem, yet world and regional powers cannot cede control of natural choke points such as the South China Sea, the Straits of Malacca, the Strait of Hormuz to aggressive nations.  Operating in such confined and dangerous waters will require innovative solutions.

Developments already underway mean that within 20 years manned submarines and UUVs will be far more capable than today’s boats, but despite improvements in stealth measures all submarines will be more vulnerable to detection.  The submarine will become less of a front-line weapon and more of a strategic mother ship for UUVs, and swarms, some of which may have been pre-positioned at obvious choke points, ready for activation on command.  These mother ships will have workshops with 3D printers capable of building and maintaining UUVs in the field.  Their operations require new, advanced command and control systems for drones and battle networks.

The submarine commander’s role will likely involve standing-off in deep water from where his submarine will launch its robotic fleets and fire its weapons.  Many of the mother ships ‘school’ of UUVs will be almost as large as the mother ship.  Intelligence and command will be conducted through undersea battle networks that can coordinate various units into an organized anti-submarine warfare (ASW) fleet to protect the mother ship and ensure enemy submarines seeking to attack it will be eliminated at a safe distance by either a homing torpedo with a range of 60-100km or a UUV swarm.

In WW2 submarines were often detected when their periscope broke the surface to sight the target, or when the air-bubble wake of their torpedoes was spotted.  Counter-attacks could quickly be launched, usually with deadly effect.  Fortunately, modern torpedoes no longer need these ‘cues’ to find their target as they can home in from great distances.  Other innovations are ‘smart’ torpedoes designed to pass the target, then reverse direction and strike from the opposite side.  Another innovation is a torpedo that always seeks out the targets propeller, again leaving no indication from where the attack was launched.

Even from this perspective of using a mother ship the range of swarms of mini-torpedoes is likely to be limited.  One option is for the swarm to be launched from either a UAV or a manned aeroplane.  As previously mentioned, UUV swarms and mines prepositioned on the seabed at chokepoints could lie in wait for years before being activated by a signal in the event of  conflict. In an enclosed South China Sea or the Persian Gulf there are likely to be ‘no-go’ zones for manned vessels that are just as dangerous for the defenders as for the aggressor contesting it.

The French submarines represnent the worst military equipment purchasing decision since Federation.  That is a big call, but based on their extreme cost, the capability differences between nuclear and conventionally powered submarines, future UUV developments and the need for a credible defence force, this farce of a purchase must be stopped as soon as possible.

Combining that action with a raft of retirements, a new Defence Review and a diplomatic request to all potential enemies to wait 20-years appears to be the best solution available.

It is many years now since I actively served in the military but, as it was a vocation and not a job, I retain a close interest in global politics and the advances in military technology.  I have had more than 50 articles published on military subjects in American and Australian military magazines.  These are my credentials.

With Wilders on the road to woe