The Age owes me an apology

I see I have been named in a column in The Age under the heading, "The Sexist Hits Just Keep on Coming". And in the text we read:

“And if we needed any reminding of the kind of stuff Jenna Price and her supporters are up against, the past few days served up a couple of useful reminders. On Thursday, RMIT economics lecturer Steve Kates did his best to put Fox News to shame with an opinion piece on the right-of-centre Quadrant Online site. Kates’ reaction to Barack Obama’s re-election: ‘The confluence of the mendicants, the envious, the abortion lobby, what I call the cohort of damaged women, and the social-sciences know-nothings has proven a formidable combination.’ "

Quite frankly, this burns me up. I am the least sexist person I know and it harms my reputation to say anything to the contrary. I will be looking for an apology from The Age and whoever wrote this statement. It is an actionable matter and I am not going to stand for it. I can hardly think of anything more purposefully designed to harm my reputation than this. It is totally unacceptable. I will not let stand such statements and this goes for anyone else who might decide to call me a sexist in print.

As it happens, I have worked for women, I have worked with women, I have had women work for me whom I have employed, I have promoted women because I thought they were excellent at what they did and I have always sought in every way to promote women’s rights in every environment I have been in. Who is this columnist to make such a statement on a single phrase in a single paragraph when, or so one gathers, she didn’t even bother to read the entire article and see what I said? She knows nothing about me at all.

My point was this: the sexual revolution has damaged young girls and continues to do them a great deal of harm. But the Obama campaign, rather than try to remedy these problems, merely sought to exploit them for political gain. This they have done, and quite successfully. Whether women are better for it in the long run I have my doubts. But that is the issue to address if you want to buy into the debate. And the particular point I was making was the vast amount of that harm.

To me, the question whether the sexual revolution has damaged young girls and the women these young girls grow up to become seems open and shut. I didn’t say all women, of course, but I do say some, and it is a sadly significant proportion. But let me make a few observations.

First, the Obama campaign targeted young single women and was very successful in this targeting.

The Gallup Poll (referenced at the link above) shows that the 2012 election produced the widest gender gap since gender-gap measurement began in 1952. Moreover, a much larger proportion of unmarried women voted for Obama in comparison with married women. This was not an accident but as a result of the  Obama campaign’s explicit design.

Second, every father who has met at the front door the young man who has come to pick up his young daughter knows very well what is in that young man’s mind. "You’re not going out dressed like that" is an old story, but it comes from a kind of experience that everyone is perfectly aware of.

Third, are women really content with the culture of the one-night stand or commitment-free serial monogamy? The culture of respect, especially the serious importance attached to sexual relations that was once a universal, has been eroded, and while it has not disappeared, it is nothing like what it was. Sex is too easy to come by; boys are less inclined to marry and girls do not end up with the love and companionship a true marriage should bring. Nor are we cultivating an environment that encourages children. This was always an ideal, of course, but is it still the culturally driven ideal, or are we into a kind of every-woman-for-herself society?

Four, enticing young women into the socially dead end of bearing and raising children on their own is a major problem. Why is that not seen as a catastrophic outcome? We have institutional structures that allow young single women to accommodate having children, but why are they not warned about how it ruins their chances in life and dulls the prospects of their children as well.

Five, how is one to make sense of "vote as if your lady parts depend on it"? That really is an Obama-Biden ad, which they pulled, but not before it made the rounds. Tell me what the ad below is supposed to be saying, and why it is not the single most sexist ad you have ever seen. 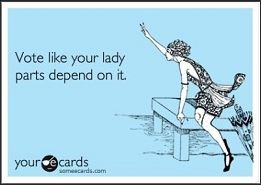 This is asking for a prioritisation of issues that is very different from what I think was important when American voters cast their ballots. I worry about the fiscal cliff, public debt, rising deficits, foreign policy, radical Islam, a nuclear Iran and other issues along those lines. How does worrying about your "lady parts" fit into this? An explanation is needed for why this is of such relative importance to young single women when the likelihood of limiting the availability of abortion or eliminating contraception is nil, as my article pointed out.

Six, whatever else my article was, it was sympathetic to the problems facing young women. It is not sexism to raise this issue. The anger which I believe is there really does seem to be there, which led to that largest-ever gender gap, not only between women and men but between unmarried and married women — in both cases with the former favouring Obama. This requires explanation, and for me, part of the explanation can be traced to the sexual revolution. I may have this wrong, although I cannot believe it is not an important part of a full explanation, but an explanation of some kind is required. The Obama campaign knew what it was doing in targeting this demographic in this way.

Seven, Code Pink and their demonstration at the Republican Convention, where they dressed as vaginas was, to my mind, vulgar, but it was trying to sway the same demographic. To me, it is something that ought to lose you votes; instead it seems to have picked them up. Look at the video below and see what sense you can make of it. Be warned, this video comes with a triple-X vulgarity alert.

Eight, Obama in many ways provides policies that seem to me to undermine marriage. In my view, the importance of marriage and stability in marriage are values that should be defended. Not everyone agrees, but that is why we discuss. Perhaps someone such as myself from a very different world does know something that might be useful knowledge to those who were not there. And it may not seem all that important to some, but the stability of the family is at the very centre of our stability as a society.

The Democrats pander to this destabilising segment of the population by providing resources that contribute to the breakdown of the family. Barack Obama’s Life of Julia ad (below) was addressed to these women. 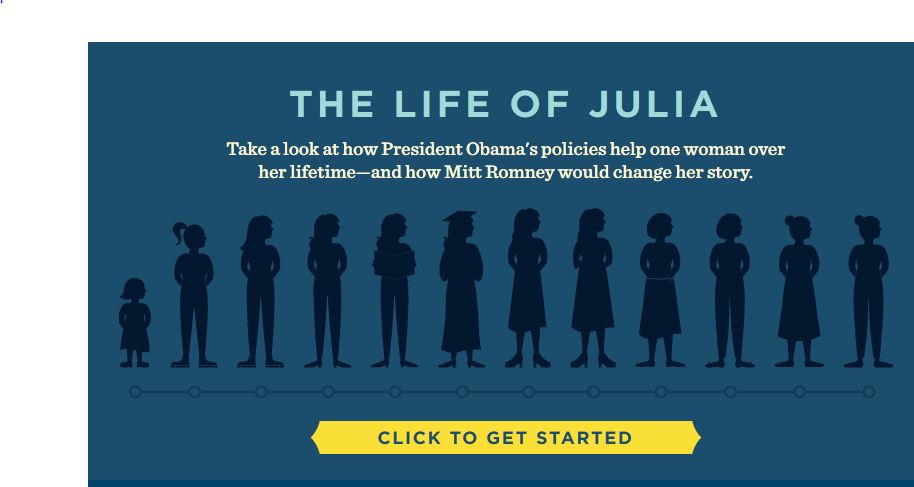 No man appeared in this ad, but at age 31 Julia had a child (a son who does appear once, when he’s six). This is a cohort that the Democrats were appealing to. I think of this Julia as very badly served by a culture that does not encourage her to have children within marriage and which allows her to look to government to provide the support that would once have been provided within a family structure.

Nine, the song by Garfunkel and Oates also looks at things from the perspective of a 31-year-old woman. I thought this made a lot of sense and, as you can see, it is a point being made by two women. The 31-year-old is angry, particularly at the stupidity of her own self when she was 29. A very clever piece of work and worth more than just a passing glance. And if you got through Code Pink, you will find this – vulgar though it is in spots — quite tame by comparison.

Ten, a sexist dismisses women as a lesser breed without the competencies to manage and do the things a man can do. I, on the other hand, have always welcomed women into top jobs and think it is wonderful that women are reaching such levels. As a society we are tapping a wonderful resource other societies do not, and both men and women are the better for it. I feel I shouldn’t have to explain myself, but as someone who supported to the maximum extent Margaret Thatcher (here is a Catallaxy Files post I authored on Thatcher, "The Greatest Woman of the Twentieth Century.") I can hardly think of my political views as tainted with an anti-woman brush. Odd kind of sexism, isn’t it, to support a woman while being anti-woman? Supporting Margaret Thatcher may cut no ice with the left, but if you are thinking in this case about men and women and not left and right, it is hard to pin a sexist tag on someone who would be happy to be governed by a woman and who would trust their political judgment ahead of someone else just because they were a male.

And whatever I felt about Hilary Clinton, I felt the same about Bill Clinton. Gender has nothing to do with it, just as I would oppose most of what Gillard has done had she been Julian and not Julia.

Lastly, I will mention the afterward of my book, Free Market Economics. This is the first of the acknowledgements I made. I won’t mention names since I don’t want to bring her into this, but she was instrumental in getting the book done as I have personally told her many times, and I wrote this to say so:

“I am therefore endlessly grateful to my colleague, _______ _____,who allowed me to write this book as the basis of the course we taught together. Her support, encouragement and sensible advice meant a good deal to me as the book was being carved out of nothing more than the ideas which had been developing in my mind over a goodly number of years. Neither she nor I knew what would come out during any given week. Her willingness to allow me to put onto paper my views on economics, and to use these as the basis for our classroom instruction, was essential for this project even to have commenced.”

I know sexism when I see it and I am not in any way, shape or form a sexist. It is a defaming statement to make about someone, particularly someone who must work with and for women. It is not true, and is demonstrably untrue. I am outraged that The Age can see fit to put such a defamatory statement into its news without even giving me a call so that I could at least make the points I am making here.

I expect an apology.