On the Road from Brexit to Flyover Country 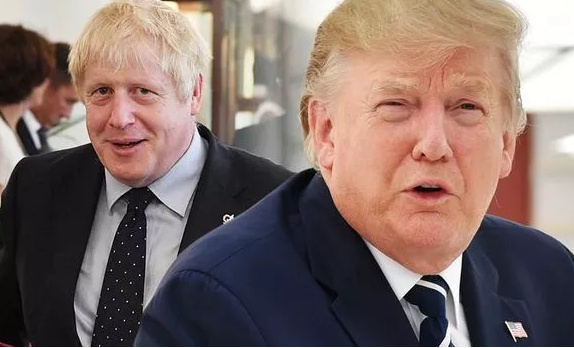 My last report was from the county of Dorset in Britain.  Alas, the time my wife and I had in London came to an end in July.  Still, I will be following like a hawk all the minute manouverings around Brexit as Boris Johnson tries to stop Remainer Tory MPs from hijacking the referendum result and keep the UK in the European Union. Proroguing Parliament, as he has just done, would seem to indicate the new PM is to be taken at his word. If you want to see a perfect example of the elected MPs of a party becoming massively divorced from the core voters who put them in Parliament, you won’t get a better example than the foes who have been, if not foiled, at least muted.

It is estimated that some 70 to 75 per cent of Tory MPs voted ‘Remain’ while some 75 percent of Tory voters opted for ‘Leave’.  With Theresa May, also a Remainer, these Manchurian MPs had their perfect instrument.  Her basic negotiating tactic was to offer the EU nearly everything it wanted right at the start, and do so while promising over a hundred times that Britain would leave at the end of March, and that it would not be subject to the EU’s top court etc etc.  She broke virtually every single promise she made and I do not see how you can put a charitable spin on that — perfidy more than incompetence, in my view.  Only when the Tories slumped to eight per cent in the recent EU elections (which Britain should not have been participating in had Theresa May kept her word) did the party’s MPs realise they were writing the world’s slowest suicide note.  That, and Nigel Farage starting his new Brexit Party, which went from nothing to topping the polls in just seven weeks, forced these Conservative MPs to act.

Only when faced with extinction and the total decimation of their party did the Tories choose ‘Leave’ supporter Boris Johnson as leader and the new Prime Minister.  An analogy is Winston Churchill.  The Tories hated the man in the late 1930s.  They tried to deselect him.  Nothing other than the fact Hitler was rampaging through Europe would ever have seen this party – stacked full of wall-to-wall appeasers –  put him in Number 10.  Boris is no Winston.  But he’s almost as hated by the Remainer faction of his party.  And thus far, fingers crossed, he’s doing exactly what we Leavers need him to be doing.  Notice that some Tory MPs are seemingly prepared to put Jeremy Corbyn in as caretaker PM rather than leave the EU with No Deal.  They all need to be deselected, in my view, for their treachery against the party (look at what it promised at the last election) and against the referendum result.

At any rate, come July and we had to go, the second half of this year to be spent in North America.  First we had a few weeks in Canada visiting relatives, and then we bought a used car and drove from Toronto to San Diego where for the next five months I will be a visiting law professor at the University of San Diego.  Now one or two readers whose memories are keen enough to recall things they read back in 2013 might recall that Mr and Mrs Allan undertook this same road trip back then.  I even wrote about it in the pages of this journal those half dozen years ago.

Well, we very much enjoyed it then so thought we’d do it again – that and we needed a car down in the US and this was the best option.  This time, however, we thought we’d take quite a different route.  So, early on a Thursday morning, we got up in Toronto, said goodbye to our families, and left for what turned out to be a quite wonderful 5,555 kilometre road trip.

Our first stop was Richmond, Virginia, where we would stay with old friends for a couple of nights.  The drive there from Toronto is a bit over 10 hours.  Of course I had to stop at the border and claim my US visa to be at the law school.  That took quite a while.  What saves time, and I think I mentioned this in my recounting of the 2013 road trip, is that the US has sane and normal speeding laws.  On interstate highways, the big ones that criss-cross the nation, you can drive at least 80 miles per hour (about 130 kph) before there is the slightest chance of a speeding ticket.  And there are no speed cameras.  Either the police catch you that day, then and there, or you don’t get a ticket.

And you know what?  All that revenuers’ propaganda about Australia’s ridiculously low speed limits promoting safety is guff. Compare deaths over distance travelled and Australia is no bastion of safety. Rather, Australia is a dysfunctional federal jurisdiction where the states need to raise revenue via speeding tickets.  I am one of the biggest supporters of the police (well, at least outside of Victoria) you will find working in any Australian law school today, so it is disappointing to see them co-opted into becoming glorified speed-meter maids.  But I also can sympathise with states, which have had their income tax power taken away from them by our highest court.  This is not the case in Canada, the US, Germany, Switzerland … the list goes on.  And the top marginal tax rates are lower in all those places save Germany, and maybe even there.

But I digress, such is my cynicism about speed limits and despair at the state of federalism Down Under.  Let me turn back to the first day’s drive.  Once you leave Canada you have some time travelling through upstate New York, bits of which hit their peak of prosperity back when the canals were king.  But it’s beautiful countryside.  So is Pennsylvania. We went down through some of the Civil War hotspots and eventually made our way into Richmond after a pretty long day of driving.  Thank God our friends were waiting on the porch with a couple of glasses of excellent Kentucky bourbon.  It’s amazing what that, and a good dinner, can do to perk one up.  I know Richmond very well, as I’ve been there to see these friends many times.  Its Capitol building was designed by Thomas Jefferson and still boasts a few Civil War monuments that those who seek to rub out the past have yet to have removed.  We drove down the James River with the other couple the next day and had lunch at one of the grand old plantations.  This was only about 40 miles from where the first Englis 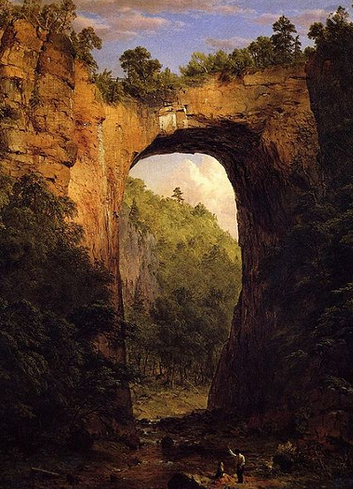 Then we were back on the road.  We opted to head for Tennessee but along the way took a detour to see the ‘natural bridge’ (surveyed by Washington, purchased for 20 shillings from George III by Jefferson in 1774 and pictured at right), then drove some 70 miles on the Blue Ridge Mountain Parkway, which is stunningly beautiful. Finally after about 9 hours stopped for ‘trip night two’ at Knoxville, much less well known than big sister Nashville.  We figured we’d better have some barbecue for dinner, the local specialty.  Trust me, if you like meat, as I do, you’ll love Southern barbecue.  Slow-cooked and smoked, it melts in your mouth.

At this point we were just over a third of the way to San Diego.  Next day we continued for another nine-or-so hours of driving into Arkansas.  At one point we figured we might stop in Little Rock.  But then we saw signs for a supposed spa town, Hot Springs.  ‘What the heck?’, we thought.  It was only another hour or so and a relatively minor detour.  Good call.  Hot Springs was not only where Bill Clinton spent some of childhood, it has an amazing history as a favoured resort of 1920s and 1930s gangsters, including Al Capone.  It had a fascinating connection with the mobsters and with baseball teams that came there because it really was a hot spring spa town where people came to take the healing waters.  (They apparently also came to visit the speakeasies, but you would have guessed that.)

Our next day was the longest of driving by far, though in part this was unplanned.  We left Arkansas and came into the State of Texas near the top northeast side and drove down into Dallas.  We stopped there because a couple who had run a local coffee shop near us in Brisbane had relocated to there.  We walked in unannounced to their new suburban Dallas place which, we were delighted to see, was packed.  I don’t drink coffee but my wife loves the stuff.  And she says neither Canadians nor Americans have any clue about coffee. Our former Brisbane friends were bringing enlightenment to Yanks on this front.  Plus we had a very enjoyable lunch (and coffee for Heather) there too.  Soon, though, we were on our way.

At this point it was about 46 degrees outside and we were on a back road heading due west, not seeing another car for half an hour at a time.  Texas is a huge state.  Finally, we decided it might be wise to get back on to a more populated interstate, taking us through oil country.  Texas tea.  Black gold.  Well, the next thing you know we’re driving for hours through lands with oil wells working everywhere you look.  Through Midland, through Odessa; we tried to stop at both.  But, and I am not exaggerating, every single hotel was booked.  This was on a Monday night.  The oil companies just buy up every room.  The economy down there is booming.  We’d been driving for more than 12 hours and had to keep going.  Finally, in a small place called ‘Monahans’ we got a room.  It was after 9pm but the restaurant beside our chain hotel was still open.  The waitress told us everyone she knew worked in oil or its service industry.  We saw a McDonalds billboard advertising jobs at over $25 an hour (US dollars remember) plus help with college tuition if you last a year.  This is the way the market is supposed to work.  This is what happens when you see the Paris Accord for the fraud it is.  The cost of energy in the US is now well under half what it is in Australia, in some places closer to a third. And the petrol is massively cheaper too.

From there we had an easy next day’s drive to Tuscon, Arizona.  It was baking hot there, too, but it’s also the home of the University of Arizona and a very pleasant university town.

Next day we drove out of Arizona (one of only two US states that does not do daylight savings time, let me add) and into California, up over the mountains, and slowly saw the temperature drop from 47 degrees down to 23 as we  drew near the coast and San Diego.  So that’s where we are now until Christmas.

Let me finish by saying that through all the Red States – the terminology they use for states backing the GOP, so your Pennsylvania, Texas, Arkansas, Arizona – we chatted to locals at the diners each morning over breakfast. To say they love Trump is to downplay things.  You heard it here first.  Trump will win in 2020 and will do so much more easily than in 2016.