How to Watch 4 Corners – Part II

Hello and welcome to Four Corners. Tonight we begin our special, three-part investigation into the story of the century: the election of US president Donald Trump and his ties to Russia.

Since his inauguration, President Trump has been caught up in a rolling series of allegations. More than a year ago special prosecutor Robert Mueller was appointed to investigate Russian efforts to interfere in the 2016 election and whether Trump and his campaign officials helped them. Also under investigation are Trump’s business links with Russia, testing allegations that his deal-making has exposed him to compromise (sic).

Over the next few weeks you’ll meet the characters in this extraordinary saga.

We begin by following the spies and the money trail.
— Sarah Ferguson’s preamble to Monday’s 4 Corners

Thus did ABC personality Sarah Ferguson kick off the national broadcaster’s detailing of Trump’s alleged fealty to Russia. Now information is the foundation of any journalistic exercise: gather facts, place them in context, lay them before the public so that, once provided with the full picture, the citizenry can form its own well-versed opinions. More than a professional obligation, it is a sacred trust. Or should be.

The key, though, is that all relevant information be presented and, more important than that, any such exercise not be freighted with loaded words and presumptions presented as undisputed fact. In this regard Ms Ferguson’s introduction violated a number of key tenets before the “investigation” proper was shared with viewers whose taxes paid for it.

For example, she tells her audience they are about to see “the story of the century”. Just twenty-three words later, the “story” — a word which suggests facts, plot and resolution — is no better than a “series of allegations.” Our century is relatively young to be sure, but are “allegations” yet to be established by Special Counsel Robert Mueller a bigger yarn than, say, the 9/11 massacres, the Syrian civil war, the failure of the Arab Spring, 2008’s global financial crisis, Benghazi, the election of the first black president? One could go on, but you get the point. In newsroom parlance, 4 Corners has hauled out the MixMaster and produced a standard issue ABC-style beatup.

Let’s pull apart this breathless exercise in error, omission and sensationalism one scene at a time.

See also How to Watch 4 Corners — Part I

BEFORE this episode went to air, Quadrant Online predicted James Clapper would figure prominently, noting that he is a most unreliable source and documenting why his any utterance needs to be taken with a Trump Tower-size pile of salt.

We got that one right, along with our forecast that no mention would be made of Clapper’s record of telling whoppers, even when under oath. Instead, Ms Ferguson deploys him to set up the remainder of the show, to which Clapper adds a showman’s touch of drama. The Russia!Russia!Russia! business is so foul, so underhand and depraved, he said, it brought him to the point of nausea.

What could have turned this veteran of decades in the cloak-and-dagger world to gastric jelly? Seconds earlier, Ms Ferguson had intoned,

…It starts with a road trip across America. Before the US presidential campaign was underway, before Donald Trump was a serious candidate, two Russian spies were crisscrossing the country, gathering intelligence on the US political system, looking for and finding vulnerabilities

All very vague, isn’t it? What were they up to, these Russian spies. Ms Ferguson tells us no more than that, encouraging viewers to indulge their darker imaginations. Planting bugs in truck-stop lavatories? Honey-trapping travellers in highway motels? Adding hallucinogenic chemicals to Rust Belt reservoirs?

Actually, it’s far more simple than that, as spelled out in the indictment against 13 Russians brought down in February and which can be read in full here. The roaming Russians were two young women, Aleksandra Krylova and Anna Bogacheva, who undertook their journey in 2014, more than two years before Americans went to the polls and a full year prior to Trump announcing his presidential ambitions. At that stage, the word was that Trump would run for the governorship of New York. To the Russians’ evil skills add a goodly dollop of clairvoyance.

And what did Krylova and Bogacheva actually do, the alleged “crime” laid out in Mueller’s indictment? They rented space on US-based servers. That’s all. That’s it. Ms Ferguson in her shock-horror breathlessness would have viewers surmise they were fossicking for and finding “vulnerabilities” in the electoral system, whatever that means. Buying computer space, which anyone can do, is apparently a threat to US national security. According to the Justice Department, this was then used to place anti-Hillary ads on Facebook, like the one detailed below and copied from a subsequent indictment. Do notice how many clicked through — a pitiful 16. This meagre traffic, Mueller would have us believe, cost Mrs Clinton the election. (They’re a bother to download, being .zip files, but those keen to see more such ads can view them here.) 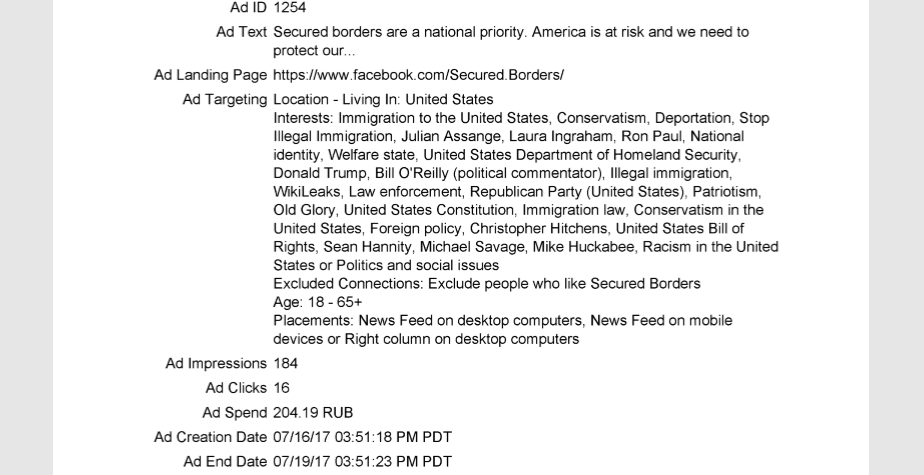 Ms Ferguson might have mentioned all of the above, but she didn’t. You don’t turn off the MixMaster just when the plot you’re cooking up is thickening.

The indictments received much attention at the time, as it seemed both the first hard fruit of Robert Mueller’s investigation and, to Trump haters, a sign that the noose was tightening around the presidential neck.

Alas, there was a problem – actually, two problems.

The first was that one of the entities Mueller accused of subverting American democracy, Concord Catering, did not exist at the time of the alleged offence. The second and bigger fly in the Mueller ointment was that Concord sent two US lawyers to court to contest the charge, a development no one expected, least of all prosecutors. It is one thing to charge shadowy characters in another country with which there is no extradition agreement, quite another to be confronted by their advocates’ muscular denials in open court.

The Mueller team’s reaction was farcical. Having made a Broadway production of the indictments’ announcement – providing a sound bite 4 Corners made a point to include – prosecutors immediately begged the judge to delay the case, arguing that they had not properly served the subpoenas on the named defendants.

Imagine that! Mueller & Co set out to prosecute a conveniently absent straw man, then pleaded to have the trial put on hold when faced with flesh-and-blood courtroom adversaries.

That the prosecution’s case isn’t faring well is something you might imagine Ms Ferguson would have cared to mention, but of course she didn’t. Why wreck a magnificent narrative with pesky, troublesome facts?  It wouldn’t be the ABC way.

NEXT up was another talking head, that of Sergy Aleksashenko, introduced as the former deputy chairman of the Central Bank of Russia, who made the rather obvious point that Putin enjoys seeing a weakened, divided America. One wonders just what and how many of Aleksashenko’s observations ended up on the cutting room floor, and especially if any thoughts about sanctions were amongst the discards.

A key element of the Russia!Russia!Russia! conspiracy meme is that Trump accepted Putin’s help in return for watering down sanctions. Well guess what? Aleksashenko, now a Brookings Institute scholar, regarded those sanctions in place at the time as worthless. “By the spring of 2016, the impact of sanctions on the Russian economy was no longer felt,” he wrote in the April, 2018, edition of National Interest. Aleksashenko concludes that essay by noting how the Trump administration has stiffened sanctions – another thing Ms Ferguson might have mentioned but didn’t – and that it is Europe which is dragging its feet.

Thus did 4 Corners lead viewers to the central character featured in the series’ first instalment, a New York spiv who currently goes by his birth name of Felix Sater, which he has variously spelled over the years to foil those interested in googling his background.

What Sater had to say was thin gruel, even allowing for the ABC MixMaster. Yes, Trump sold apartments to rich Russians, just as he sold them to rich Brazilians. Did Sater, introduced as Trump’s “business partner”, believe him to be a Russian agent? No, he didn’t. Was the nature of their “partnership” explained? Only once, briefly and in passing, when fleeting mention was made of “licensing arrangements”.

Just like Richard Branson’s Virgin, Trump is both a man and a brand and operates the same way. Want to sell steaks, wine, golf balls or tea cosies and think a Trump connection will lift your product’s market profile? Well Trump will lease you the use of his name, which is what he did with Sater’s three real estate projects.

This licensing agreement would have been worth explaining so viewers could put the men’s relationship in perspective, but 4 Corners didn’t do that. The ABC MixMaster kept right on churning through the remainder of the show.

WHAT wasn’t mentioned? A key question: why is Sater shooting his mouth off to anyone with a camera, having appeared on dozens of TV shows and, as Der Spiegel reports, even chatting away to wild-eyed conspiracy theorists – no, not just Team Mueller’s tale-spinners — who regard Trump as the Antichrist with a comb-over.

Washington Monthly reporter Martin Longman’s curiosity was piqued, however, and he has compiled this lengthy but first-rate profile of Sater, his past, convictions, mentor, associates, links to US intelligence, the FBI, the Mafia and US-based Russian mobsters. True, 4 Corners touched on the same ground, but the obvious question – why is he so keen to swan about in the limelight, this man of mystery? — remains unanswered.

If, as Trump has repeatedly asserted, the Deep State’s intelligence establishment is out to get him, would not a man with stories to tell, a man who, by his own boast, has worked for the CIA and FBI for more than two decades, be a useful asset in framing such a campaign? Even without accusing Trump, which he has not done, Sater serves to air the allegations, his words and even his denials amounting to seedstock and fodder for the likes of Ms Ferguson to blather about “the story of the century”.

Sater’s possible motive for being so garrulous would have been an interesting avenue to explore, but 4 Corners did no such thing. Perhaps that will happen in the course of the next two episodes, or perhaps it won’t.

Either way, don’t hold your breath for 4 Corners to do anything more energetic than cover the ground so many others have covered before. That, and leave out a wealth of information which doesn’t fit the Russia!Russia!Russia! narrative