How to Watch 4 Corners

Normally, it is a good idea for critics to see the show they’re writing about before producing a review, but when it is the ABC tackling Donald Trump and the legitimacy of his election, as 4 Corners will do tonight in the first of a three-part series, certain assumptions can be made with absolute confidence.

The first near-certainty is that most of the information presented will be cribbed and re-packaged from sources ABC types find congenial, which is to say the New York Times and the Washington Post. These are two organs where Trump has been deemed guilty from the moment the Russia! Russia! Russia! “scandal” was confected and laid before the public by way of explaining why Mrs Clinton lost.

To back this up, a selection of talking heads capable of pithily laying out the preferred narrative’s talking points will go before the ABC’s cameras. Thus are viewers certain to get what the ABC will present as the good oil from former National Intelligence Director James Clapper (above) and his assurances that if Russia did not swing the election, they most certainly meddled to Mrs Clinton’s great detriment. What will we learn of Clapper by way background? Expect reporter Sarah Ferguson to intone something along the lines of “he has spent his career at the very centre of the intelligence and law-enforcement machinery that supports the shadowy combatants in the cloak-and-dagger world of international intrigue.” They won’t be her exact words, of course,  but that will be the sentiment sure as eggs.

Likely not to be mentioned — and if it is, to be glossed over — is Clapper’s record of telling flat-out lies, something he has done under oath before at least one congressional committee and a habit he has maintained and polished since his retirement in December, 2016. Consider, for example, Clapper’s response in March, 2013, when Democrat Ron Wyden asked for a “yes or no answer” about whether or not the National Security Agency (NSA) “collects any kind of data at all on millions or hundreds of millions of Americans?”

Clapper scratched his head, cast down his gaze and, after a few seconds’ pause, gave an emphatic, “No, sir!”, followed by the further assurance that surveilling American citizens inside U.S. borders is something intelligence agencies “do not engage in.” Mere weeks later, as The Hill put it,

Banishing all and any lingering doubt three months later, Edward Snowden released his infamous files, establishing that Clapper’s response bore not even a nodding familiarity with the truth. 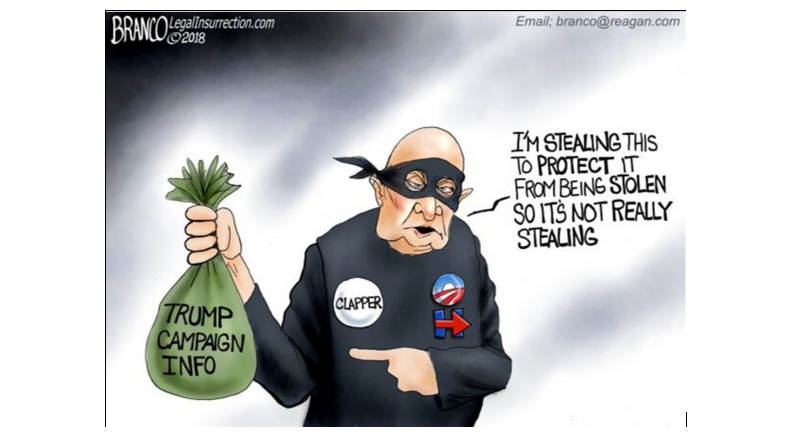 American cartoonist Branco is unlikely to be interviewed by 4 Corners

With a book to push, a tarnished reputation to bolster and a notional Kremlin conspiracy to  promote, Clapper has doubled down on doubletalk. Only last month, for example, he settled down with the lady airheads of US chat show The View to smack a series of Dorothy Dixer softballs over the fence of demonstrable fact. Be it Whoopi Goldberg or Sarah Ferguson, Clapper is a dab hand at telling sympathetic interviewers what they want to hear. That his assertions are pure bilge bothers neither him nor, sadly, his interlocutors in the slightest.

Below, a video clip of that View outing. Pay particular attention to Clapper’s now slightly amended story that, while he admits giving Wyden a false answer, it was but the unintentional consequence of confusion prompted by the congressman’s use of vague “euphemism”. In other words, according to Clapper, he gave a truthful answer to the wrong question. While the entire View interview is worth watching, not least to see the panel’s thinly veilled contempt for Trump, the specific matter of Clapper’s veracity, or lack of, begins at about the four-minute mark.

Now look at the actual Wyden-Clapper exchange (below). The senator’s question is direct, unencumbered by metaphor or euphemism, tightly focused and narrowly specific. The answer Wyden received, like Clapper’s subsequent depiction of his testimony, is a lie. If the man found Wyden’s question confusing, what in Heaven’s name was he doing serving as National Intelligence Director, a post one assumes to require analytic acumen, savvy comprehension and clarity of thought and expression?

This aversion to truth would be worth mentioning, or so you might think. Will 4 Corners lay before viewers Clapper’s background? Will the show note that Clapper’s words so often roll off a forked tongue? Don’t be silly!

Similarly, how will 4 Corners present the recent news, also touched upon in the View‘s soft-soaping, that the FBI had an informer inside the Trump campaign? First, though, let’s step back in time just a little bit.

Early last year, shortly after his retirement from government service, Clapper denied Trump’s campaign had been surveilled or bugs placed in his New York campaign headquarters. He also rejected the suggestion that FISA warrants had been requested and used to monitor Trump operatives and, when asked directly, he stated there was no evidence of Russian involvement. The clip of those remarks, made on the US political talkshow Meet The Press with interviewer Chuck Todd, can be viewed here and the transcript read in its entirety here. Here’s a key passage (emphasis added):

Todd: Yeah, I was just going to say, if the F.B.I., for instance, had a FISA court order of some sort for a surveillance, would that be information you would know or not know?

Todd: You would be told this?

Clapper: I would know that.

Todd: If there was a FISA court order–

Todd: And at this point, you can’t confirm or deny whether that exists?

Clapper: I can deny it.

Todd: There is no FISA court order?

Clapper: No— not to my knowledge.

Todd: Of anything at Trump Tower?

Todd: Well, that’s an important revelation at this point.

Then there is this from later in the same interview, when Todd asks Clapper if evidence of “collusion” with Russia actually exists.

Clapper: Not to my knowledge.

Today we know and have had confirmed that two of those responses were flat-out untrue: FISA warrants were issued and Trump’s campaign was spied upon.

As to the Russian involvement of which Clapper then avowed having no evidence or knowledge, today he tells an entirely different story. Again, consult his comments in the View clip embedded above. What he says now is that the campaign informer, the one he formally denied existed, was actually doing Trump a favour. Give the man points for chutzpah! The relevant section’s transcript:

Host (and Hillary groupie) Joyce Behar: So I ask you, was the FBI spying on Trump’s campaign?

Behar: Well, why doesn’t he like that? He should be happy!

Clapper: He should be.

Compare and contrast those responses. In March, 2017, Clapper says one thing and fourteen months later he says the opposite.

And what will he say on tonight’s 4 Corners as Sarah Ferguson nods and encourages the preferred line?

We’ll have to wait and see, but don’t expect hard questions, background information on Clapper’s windvane attitude to telling the truth or, what will undoubtedly be the most telling omission — any connecting of the dots that paint a disturbing picture of a US justice and intelligence cabal that not only favoured Mrs Clinton but has since gone out of its way to delegitimise the man who beat her.

There is one thing readers can expect over the next three weeks: as the 4 Corners transcripts are released, Quadrant Online will take each one and footnote it with the links and background the ABC will choose not to report.

It will be quite the chore, but important. After all, someone has to tell the truth.

Roger Franklin is the editor at Quadrant Online.

8 thoughts on “How to Watch 4 Corners”

Calumny as a Stock in Trade

The Hollow Shell of Modern Marriage