It seems the obvious thing to do on Anzac Day — think about bravery, character and courage. So it is with some surprise that the question of these very qualities should surface at this time regarding our formidable, and seemingly indestructible Prime Minister, Kevin Rudd.

It is hard to imagine our PM splashing through the surf at Gallipoli, slouch-hatting through the sands of Palestine or even perhaps burrowing into Hill 60 in Belgium. Even more so, sloshing through mud and slime in a Flanders trench, waiting for an order to go over the top. Being a prime minister requires many other qualities including trust, honesty and perhaps more importantly, a compelling desire to tell the truth.

Curiously though, in the past few days the question of bravery, character and courage has been associated with Kevin Rudd’s conduct when it has come to him actually facing the music associated with the failures of himself, his ministers and his government. And this question of the qualities of our PM has been echoing through various quarters of the media all week.

Perhaps one of the most remarkable examples of bravery, character and courage we could think about during this Anzac Day was the actions of a 19 year-old Royal Australian Navy seaman from the small rural town of Latrobe in Northern Tasmania. 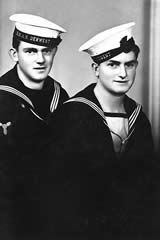 He was aboard HMAS Armidale, out of Darwin, on a mission to rescue Australian troops and Portuguese citizens from Japanese-occupied Timor. The seaman’s name was Edward “Teddy” Sheean (on right in photo). It was December 1942.

As HMAS Armidale headed back towards Darwin from Timor she was attacked by 13 Japanese aircraft and hit by two torpedoes. The order was given to abandon the sinking Armidale and as Sheehan made for the side of the ship, after he helped free a life-raft, he was hit by two bullets. He then made the decision not to join his mates in the life-raft, but head to the stern of the ship and mount the ships Oerlikon 20mm cannon and engage the attacking Japanese aircraft. He strapped himself to the gun. Sheean shot down one aircraft as it tried to strafe the Armidale’s life-rafts. Survivors — 48 out of 149— said that Sheean was still firing his gun as the Armidale’s stern disappeared beneath the waves.

Sheean’s fellow crewmates said that they saw bullets still coming up out of the sea after Sheean was dragged under and the ship was no longer in sight.

Critics of Kevin Rudd charge that our Prime Minister ducked down to Tasmania to avoid being “dragged under” when a series of disastrous announcements were about to be made on failed Labor and Rudd policies. Critics also charge that the retreat to Tasmania was under the cover of the Storm rugby scandal. Nothing like a good-news-day to hide a bad news. But The Hollowmen had a lot on their hands this week.

The exploding fiascos surrounding the abandonment of the awful “Pink Batts” adventure, the breaking of an election promise for 200 child-care centres, the unravelling of the COAG State/Federal health balls-up and the abandonment of the ill-conceived and dangerous Human Rights Charter were all made while our PM hid in Hobart or was annoying the sick in various hospital wards.

Then poor old Penny Wong was left to announce an inquiry into the bungled/bungling Green Homes Loans initiative. And then the nation is spending in excess of $600 million trying to manage the Rudd/Evans illegal immigrant mess that has resulted after they dismantled the Howard border protection initiatives. And not forgetting the whole “Doomed Planet” scenario” that led up to the Copenhagen debacle. According to their song-book the Great Barrier Reef should have gone and the Murray River be now kaput and the Sydney Opera House underwater. Moving on.

The Rudd/Gillard Building the Education Revolution supplies daily fodder to The Australian newspaper’s investigative reporters exposing rort after rort and shonky quotes and prices for many school buildings that are either gougingly over-priced pre-fabs or so simple that a P&C working-bee could knock then up in no time funded by a few extra Lamington drives. Oh yes! Julia’s having an enquiry into this too — announced without sound or sight of Kevin.

In 2007 Australia’s income from tax was about $241 billion. In 2009 Kevin Rudd announced a $42 billion stimulus package and a $43 billion broadband network and $30 billion for 12 new submarines. Of course it would take a bit of courage to tell us who is going to pay for all this, and when and how? That would take character … not spin.

The notion of bravery, character and courage emerges when it is remembered that Kevin Rudd was front and centre when the above policies were trumpeted and indeed they were very much acknowledged to be Rudd-inspired and Rudd-thought-through schemes. When the fighting gets tough Kevin Rudd takes-off like a character in a Warner Bros’ Looney Tunes cartoon and heads for Hobart. Think Roadrunner or Speedy Gonzales. Except that what is happening in Australia seems to cover the whole library of Looney Tunes characters. Talk about laugh! No, make that cry!

Meanwhile the battle for the nation’s soul appears to be lost. There was an age when Australian’s could spot a shonk a mile off. The phoney would be soon culled out of the crowd. The con-man sent packing. No longer. The Rudd spin machine is all powerful.

The Bruce Hawker and the Lachlan Harris types seem to have the game sewn up. Though some commentators are rebelling. Melbourne’s 3AW radio announcer Neil Mitchell had this to say after he was spun-dried by Kevin Rudd last week:

I think that interview on Wednesday was one of the most extraordinary I have conducted with the Prime Minister. It didn’t matter what I asked him, he just said what he wanted to and it was gobbledy-gook designed to hide the fact that this whole health — alleged reform — is not reform. Look I don’t say it lightly, but I think by any sensible definition that Kevin Rudd should be finished. The Rudd government should be in its last days.

What is now happening now reminds me of the last days of the Whitlam government. Incompetence piled upon stuff-up. The difference here is that the sophistication of the spin from the government makes it damn near dishonest.

Oh yes! Anzac Day has more to offer and give us than just thinking about battles won and lost — although that is important. It is a day to ponder upon the idea of courage, character and bravery. For his bravery Edward “Teddy” Sheean’s only reward was a Mention in Dispatches, although the Royal Australian Navy has named a Collin’s Class submarine in his honour. The battle to have him awarded, retrospectively, a Victoria Cross is ongoing.

Kevin Rudd’s reward is the Prime-Ministership of this country.