A Royal and Platinum Bond Only Death Could Break 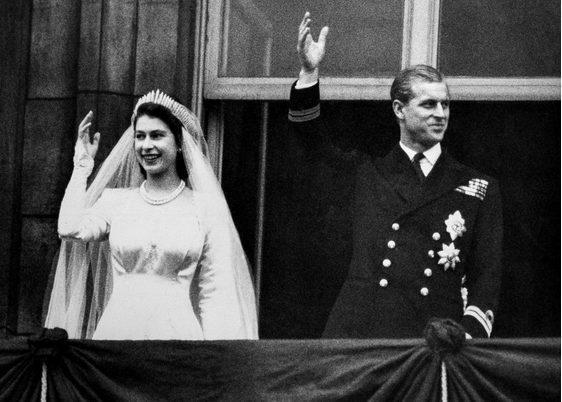 In 2013, a Western Australian couple, Joe and Rose Zekulich, celebrated their 82nd wedding anniversary. They would have received the customary telegram from their Sovereign. In fact they would have been receiving one every year since their platinum anniversary in 2001. Today the Sovereign has earned herself a self-congratulatory telegram: it is seventy years since she and Prince Philip were married.

On a cold day, November 20, 1947, the 26-year-old groom had woken at Kensington Palace, where he had stayed overnight with his grandmother, the Dowager Marchioness of Milford Haven, and asked if tea and coffee could be taken out to the photographers who stood in waiting. This was the dawn of a long and mutually snappy relationship. Philip had much to be chipper about. The day before, his prospective father-in-law had given him the Garter and created him Duke of Edinburgh, Earl of Merioneth, and Baron Greenwich. As the King put it, “It’s a great deal to give a man all at once, but I know Philip understands his new responsibilities on his marriage to Lilibet.”

Meanwhile at Buckingham Palace, the 21-year-old bride told her governess, Marian Crawford (‘Crawfie’) she had to keep pinching herself. “I can’t believe it’s really happening.” It had not all been plain sailing but from her first significant encounter with Special Entry Cadet Mountbatten in July 1939, when the Princess and her parents visited Dartmouth College, there was no doubt of her feelings, as well-guarded as they were. He made quite an impression, certainly among the Princess’s circle who would sing, “Oh come to my arms, thou bundle of charms, Philip Mountbatten RN”.

The Queen Mother had a preference for home-grown blue-bloods (after all, George VI had chosen from that pool) and Her Majesty did not take to her daughter’s handsome, homeless, heirless suitor. Being lumbered with the embarrassing moniker of Schleswig-Holstein-Sonderburg-Glucksberg was not helpful. But the Princess was resolute.

Although Elizabeth did not need it; and Philip never sought (but quietly suffered) it, his Uncle Dicky, Lord Louis Mountbatten, found time to advance his nephew’s cause, despite being the Supreme Allied Commander of South East Asia. In preparation for his fate as consort, Philip shed his four surnames for the Anglicised version of his mother’s family, the Battenburgs. He was also naturalised; but this proved completely unnecessary for a descendant of Sophia, the Electress of Hanover. Once he converted from Greek Orthodox to embrace his fiancée’s Anglican Faith, Philip was as entitled as any royal groom.

After the tragedy, sacrifice and gloom of the war, this ceremony was to be ‘a flash of colour on the hard road we have to travel’. Rationing still hung about every household; yet among the wedding presents were dozens of pairs of silk stockings. The Mountbattens gave a cinema for Clarence House; Shang Kai-shek a set of Chinese porcelain; the Aga Khan a thoroughbred filly. A woman from Brooklyn sent a turkey because ‘they have nothing to eat in England.’ The Government of Queensland had the same idea with its gift – five hundred cases of tinned pineapple. The bridal dress had absorbed three thousand coupons. Its maker, Hardy Amies, had to convince the media that the silkworms sacrificed to make the gown were not just Chinese but nationalist Chinese silkworms.

The Irish state coach bore the bride and her father, dressed in the uniform of an Admiral of the Fleet, processed along the Mall towards Westminster through crowds in places almost fifty deep. Sir Michael Duff wrote, ‘The King looked unbelievably beautiful; like an early French King and HRH the Bride a dream.’ Inside the Abbey were some 3000 guests but not one of the groom’s three sisters. Three of his sister Sophie’s brothers-in-law were still to be denazified. Their mother, Alice (Princess Andrew of Greece) wrote a 22-page account of the day for her family; and two cousins among the guests, Marina, the Duchess of Kent and Queen Frederica of Greece, were despatched to the Continent to share this with their accounts of The Day with their shunned kin.

The bride promised to obey; but really the groom was the one who would be required to submit; not as husband but as consort. His first sacrifice began that day. In deference to his bride’s concern about its effect on her father, Philip gave up smoking overnight. 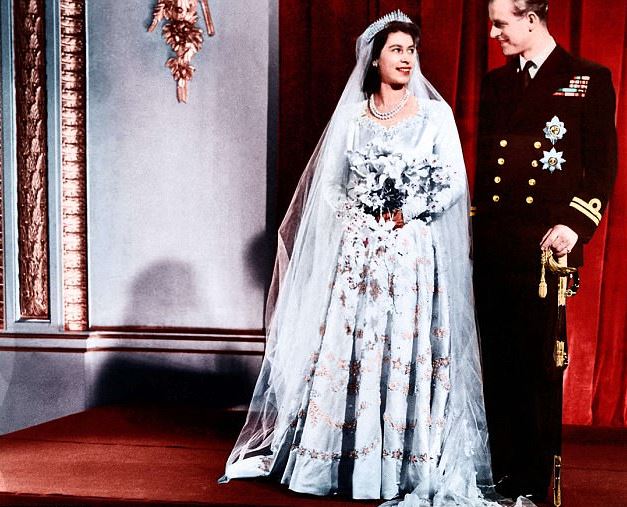 As the couple set off from Buckingham Palace after the wedding breakfast, all three parents were in tears. The course was set for the rest of their lives together Accompanying them on their honeymoon were their detective, their driver, a footman, John the Duke’s valet, and Bobo MacDonald, the Princess’s omnipresent dresser.

Within five years, the happy-go-lucky life of a naval couple was over and Elizabeth was Queen, finding herself  — in the words of biographer, Gyles Brandreth — “married not only to Philip but also to those infinitely more demanding spouses, Britain, the Commonwealth.:” It is extraordinary to think that had Elizabeth’s parents enjoyed her longevity, they would have celebrated their platinum anniversary in 1993.

Philip carved out a life and career in parallel. Yet his mantra was, and remained, that his role was to support the Queen. At every key moment in her reign, he was beside her. Well, three paces behind her – but the fact is that he was always there. And as parents of an heir, a Princess, and a decade later, two more Princes, the royal relationship was soon established – while she wears the Crown; he wears the trousers.

Philip’s irascibility more than anything highlights his inability to suffer fools – a fundamental requirement for a royal whose life is full of brief encounters, walk-abouts, patronages and passings-out. He stays alive and interested in the endless audiences, line-ups, and crowd encounters by shaking up and challenging those he meets. He does not have his wife’s extraordinary control. Examples of his interaction with crowds are legion but one of the best is an encounter on a visit to Australia where Prince Philip saw a woman surrounded by children. He asked her who the children were. The woman answered that all fourteen children were hers. The Duke said he was going to find the Queen so she could give the woman’s husband a knighthood. “Oh, no,” the woman replied, “He won’t wear one.”

The union of Queen Elizabeth II and the Duke of Edinburgh has been an inspiring double act – a couple who make each other complete; a complementary union that has not just endured, but thrived.

Mark McGinness is a frequent contributor to Quadrant