Well, we certainly had a big vote out of Scotland. Seventy-five percent of those eligible to vote did so.  And there was a clear winner.  Indeed, I think it would be fair to say there was a massive winner.  More than four out of five cast their ballots for change.

There you have it then.  After 260 years of being forbidden to become members (they could play but not join), women are now eligible to join the Royal and Ancient Golf Club in St. Andrew’s, Scotland.  This is the body that not only runs the golf course there, and administers British Opens, it is the body that governs the game all over the world, apart from the United States and Mexico.  So don’t let anyone tell you the Scots aren’t open to change.

As for that other vote out of Scotland yesterday, I’m relieved and delighted that the ‘no’ case prevailed.  But isn’t David Cameron the worst sort of Tory going?  Imagine agreeing that the separatist leader, Alex Salmond, could enfranchise 16-year-olds, but just for this one vote.  Imagine agreeing that Salmond could pick the timing of the vote.  And can you think of a worse way to run a campaign, all bloodless and boring until the last minute, when you run up north and promise maximum devolution?  What a shambles! 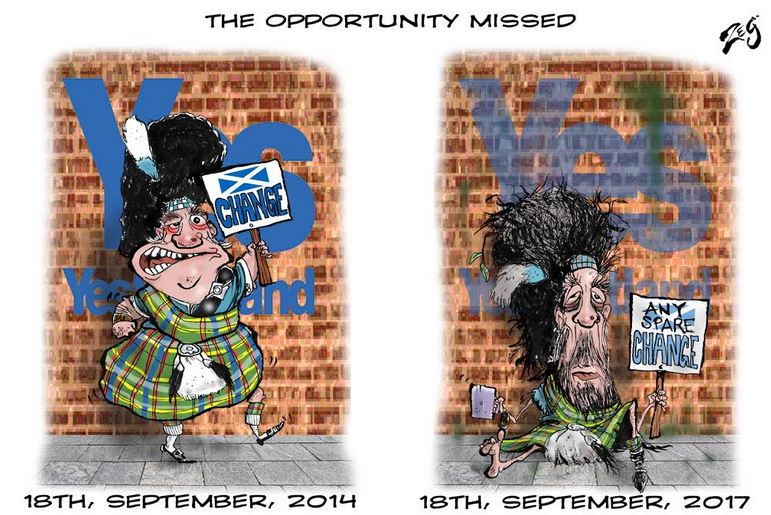 If you want to see a referendum really lose, just wait for the one that Mr. Abbott and Mr. Shorten concoct and present on the Recognition issue.  If you’re like me you’ll be sick and tired of hearing puffed-up proponent after puffed-up proponent talk in terms of how the majority of us are ‘poor benighted know-nothings who need more time to absorb the oh-so-nuanced case in favour of change’.  Listen, Mr. Abbott, plenty of people understand the issues perfectly well.  The problem is that the case for change is so pathetically weak — at least if we’re talking about anything at all more than a simple repeal option.

That brings me to those newspaper commentators who are now pleading for reform of our economy.  You know.  Liberalise labour relations.  Fix up spending.  Do what you can about the NBN.  And so on and so forth.  Now I’m not saying they’re wrong.  But what irks me is that some of these pontificators were keen-as-anything fans of Julia and Kevin.  Even The Australian plumped for Kevin in ’07.

Well, these present day pontificators knew perfectly well back then that a Labor government would massively roll back the clock on labour relations.   They knew it would spend like a drunken sailor.  (Last time a Labor government ran a surplus was back in the 1980s, if you’re wondering.)  They weren’t fussed by a big government NBN.  So it’s galling to hear them call for economic reform now.  They know who they are, these hypocrites.

Let me close by saying that the ‘yes’ vote in Scotland was probably unimaginable two or three decades ago.  It was nice to see the ‘separate’ option go down to big time failure.  I’m talking golf, one of the important things in life.

James Allan, Garrick Professor of Law at the University of Queensland, is the author of Democracy in Decline, out now from Connor Court Press