Warmists Are Feeling a Polar Chill 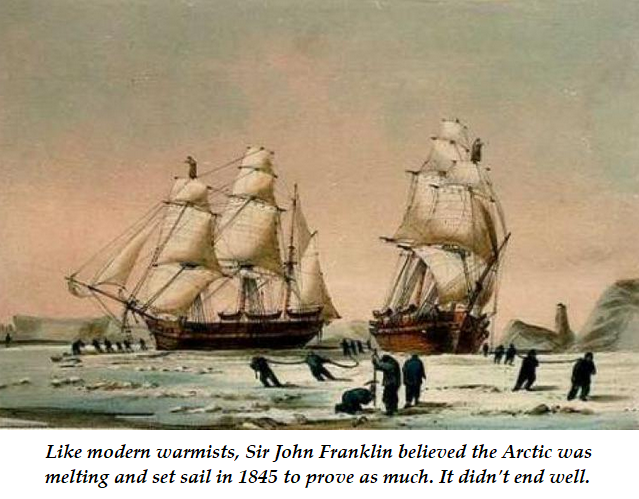 As you read this today, the summer extent of the Antarctic sea ice sheet once again will have reached its long-term average for the beginning of February — an average based on what is now almost four decades of satellite observation ongoing since 1981. Given that we are bombarded by activist climateers, a unquestioningly gullible mainstream media and legions of doomsayers’ constant reminders of the dire straits in which the planet allegedly finds itself, it may surprise many to learn of this fact, especially in regard to what we are told are the looming and catastrophic rise in sea levels. There is, however, no need to fret.

It is an incontrovertible truth that seasonal sea ice melt at both poles has no appreciable effect on global mean sea level due to the fact that sea ice floats; when it changes state from ice to liquid its volume is equal to the water it displace, leading to no net change. If this weren’t the case we would experience significant sea level shifts on a seasonal basis. However, the complexities aroundAntarctic and Arctic sea ice sheets are in many instances not shared. For instance, the Antarctic ice sheet is a greater combination of large continental ice flows and annual sea ice formation than its Arctic counterpart. What can be extrapolated with some degree of certainty is that the greater the extent of sea ice, the colder prevailing conditions. Were this not true, those who object to such a correlation might seek to explain why sea ice extended to around 50 degrees north latitude at the height of the last major ice age, as indicated by the map below. 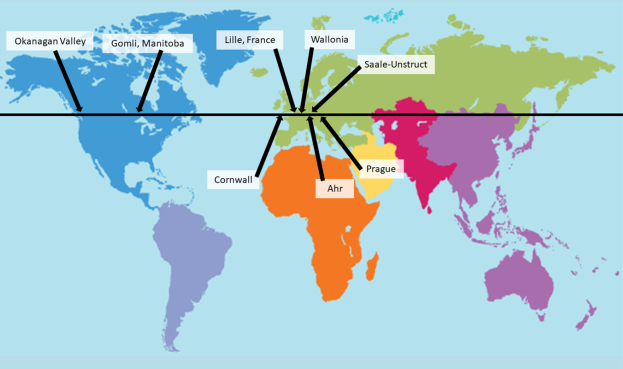 It is also the case that the greatest threat postulated by anthropogenic global warming (AGW) alarmists to sea level rise is a melting of the Greenland and Antarctic continental ice sheets. Yet NASA Earth Observatory reports the largest of the Greenland glacier, the Jakobshavn Glacier in western Greenland, has grown substantially in the last three years to June 2019, adding as much as 30 metres thickness per annum.

Back in early October of 2018 this journal highlighted the hyperbole surrounding the September 2019 IPCC ‘Special Report on the Ocean and Cryosphere in a Changing Climate’. Supporters and contributors to that document, such as Professor Mathew England, were quick to hit the media with dire proclamations of an imminent ‘tipping point’ that would see sea levels rising by metres in the not-too-distant future. So let us take a quick look at how things are going for the catastrophists on the polar ice-sheet front.

As stated above, the Antarctic sea ice sheet is now back to its mean extent for the middle of summer. Now while it’s true that it has come off a low base from the 2019 winter, where its extent was well below mean, it can’t be overlooked that the current relative abundance of sea ice has occurred in the context of nearly 420ppm atmospheric CO2  and a southern hemisphere summer that alarmists claim, yet again, to be the hottest-ever. And let’s also not forget it was only a few short years ago, in the winter of 2014, when Antarctic sea ice was at the greatest extent ever recorded — that was the year after Professor England’s UNSW colleague Chris Turney led the infamous “ship of fools” expedition to study the “vanishing” ice, only to find himself and fellow climateers hopelessly stuck in the stuff. It will come as no great surprise to any grounded observer that the extent of Antarctic sea ice oscillates through the full range of its bell curve over the course of time due to all the variables that determine extent at any given moment. What should be a surprise to anyone who has bought into AGW fearmongering is that, in the face of CO2 levels now at 1.5 times the supposed ‘Goldilocks level’ of 280ppm, the Antarctic ice sheet is proving highly resilient and, as of right now, is back at ‘situation normal’. 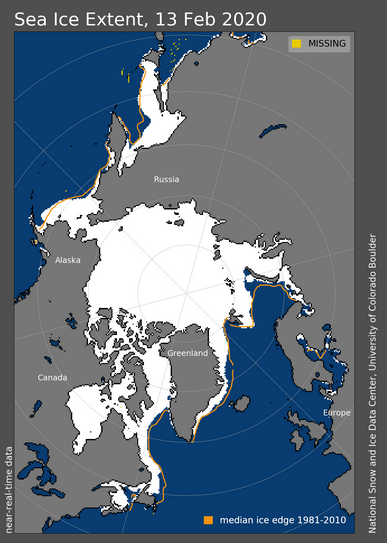 What about the Antarctic’s obverse? What is the current status of Arctic sea ice extent? Well, once again, as we approach the depth of the Northern Hemisphere winter, things also could be described as normal. Indeed, current Arctic sea ice makes a mockery of those who have argued that the all-year opening of the North West Passage to shipping is only a matter of years away — a belief also current in the 1840s, when the Admiralty responded to sealers’ accounts of a melting Arctic by sending a former Tasmanian governor, Sir John Franklin,  two ships and some 150 seamen to chart the fabled Northwest Passage. Then as now, the Arctic failed to cooperate, and the entire expedition perished.

For interest’s sake and historical perspective, it is worth citing the case put to the Admiralty by the Royal Society — warmists then and warmists today — which sent Franklin and his party to their doom:

It will without doubt have come to your Lordship’s knowledge that a considerable change of climate, inexplicable at present to us, must have taken place in the Circumpolar Regions, by which the severity of the cold that has for centuries past enclosed the seas in the high northern latitudes in an impenetrable barrier of ice has been during the last two years, greatly abated…

…this affords ample proof that new sources of warmth have been opened and give us leave to hope that the Arctic Seas may at this time be more accessible than they have been for centuries past, and that discoveries may now be made in them not only interesting to the advancement of science but also to the future intercourse of mankind and the commerce of distant nations.

While today’s northern hemisphere’s sea ice extent is the tenth-lowest on record since 1981, it is also comfortably within its interdecile range. If you are interested in what that discrepancy looks like on the ground, take a good look at the latest image (above) from the National Snow & Ice Data Centre (NSIDC) at the University of Colorado, where the red line indicates the recorded mean between 1981 and 2010. The difference in sea ice extent as currently observed is analogous to the difference in a persons’ height from first thing in the morning to that at the close of the day — essentially inconsequential. And with peak sea ice extent usually experienced in early March it may well yet meet the mean extent or even exceed it.

And here is the thing with polar sea ice, it’s a bit like a T20 cricketer in the sense that they are only as good as their last game. While long-term trends clearly matter, the oscillations of the numerous climactic permutations that lead to both above-average and below-average sea ice likely play out over centuries rather than a mere handful of years.  It does nothing to sustain the argument of permanent and irreversible AGW and sea level rise if the ice sheets flux to low levels but then grow again to normal levels and perhaps beyond. For the theory of irreversible sea level rise to hold any water at all, the continental ice sheet degradation also needs to be permanent and irreversible over a very extended timeframe. It is an anathema to the claim of permanent sea level rise if ice sheets were low for a handful of years but are now growing again. The here and now is all that matters. And the here and now for polar ice sheets looks encouraging.

How will the alarmists and catastrophists explain such an anomaly? By the IPCC’s reckoning and that of the doomsday cheer squad at the ABC we are already in a runaway global warming scenario. By such reckoning ice sheets should never again reach normal mean values, in the context of a sustained ‘global’ rise in mean temperature. It certainly doesn’t bode well for catastrophic sea level rise. With just 10-12 years before all is lost, depending on which climatic Chicken Little you prefer, the catastrophists have just had one of those years pulled out from under their feet, effectively setting back the doomsday climate clock to 1981 levels. The world, or so it would appear, has just bought itself another four decades.

For all the hot air emanating from the AGW circus all we have to show for it currently is an Antarctic sea ice sheet at long term average extent for summer, plus an Artic sea ice sheet that is within 10 per cent of the very same. Indeed, one can conclude that, overall, atmospheric temperatures and polar ocean currents at both poles have been colder in the last three months than during the same period over recent years. We may even be at the commencement of a cooling trend for the planet’s polar ice caps. If so, it will be fascinating to watch the alarmists switch stories. What will remain consistent — and you can take this to the bank — is that the cup-rattling for grants, subsidies and business-class seats to climate gab fests will continue. Climate changes, climateers never will.

In recent weeks even the uber catastrophists behind the 2017 Thwaites  ‘Doomsday’ Glacier report that projected over a metre rise in sea level by 2100 due to melting Antarctic glaciers, displacing a guesstimated 150 million people, have revised their projections down by a whopping 66 per cent.. Yes, that’s right: another flop to add to the ever-growing list of failed AGW models. Worth noting in this latest alarmists’ retreat is that scant mention is made by alarmists of the several volcanic hotspots playing a significant role in melting the glacier from the bottom up, not the top down, as would occur with atmospheric warming. When it comes to fear-driven grant-snaffling, assailing SUVs and air conditioners as the prime cause of Gaia’s anguish is a much sexier and saleable scenario.

Amid all the variables one thing remains certain: you may withhold your child’s antidepressant medication tonight and settle them into bed with a comforting promise that there will be plenty of polar ice for them in the morning — and the foreseeable future.

25 thoughts on “Warmists Are Feeling a Polar Chill”