Supporters of carbon pricing argue it is the cheapest way to reduce global greenhouse gas (GHG) emissions. However, their assumptions are unlikely to be achieved in practice, as it is unlikely such a program can be implemented and sustained for the considerable time required for it to work. With the Emissions Trading Scheme (ETS) representing a key difference between the Rudd Government and Opposition, this article examines the underlying logic and argues that it can never succeed and should be repealed without delay.

Analyses by Professor William Nordhaus, a long-time advocate of carbon pricing and a recognised authority on estimating the costs or benefits of climate change, greenhouse-gas mitigation policies and "optimal" carbon-pricing, demonstrates that any such scheme must be global or it will not succeed. Nordhaus (2008), p198, says:

“Complete participation is important because the cost function for abatement appears to be highly convex. We preliminarily estimate that a participation rate of 50 percent instead of 100 percent will impose a cost penalty on abatement of 250 percent.” 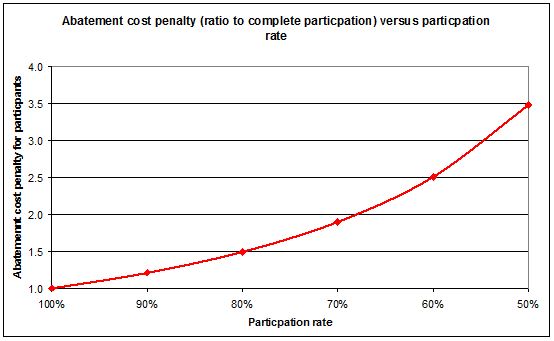 In reality, the cost penalty for participants would be worse than this because, with less than full participation, there would be "leakage" of emissions from participants to non-participants. The abatement costs are likely to be higher than Nordhaus has estimated because the compliance cost of carbon monitoring, reporting, policing and disputation has not been included. The compliance cost would escalate as smaller emissions sources are included.

Given all of the above, we should consider what level of participation could realistically be achieved and what the compliance cost would be.  Furthermore, given the cost penalty for participants, is there a high probability of a global agreement to price carbon being implemented and maintained for as long as necessary to achieve the stated goals?

Nordhaus explains that the assumptions used for the cost-benefit analyses, used to justify global carbon pricing, are academic and entirely unrealistic for the real world.  He says (page 68):

“We should provide a word of caution about the optimal case. It is not presented in the belief that an environmental czar will suddenly appear to promulgate infallible canons of policy that will be religiously followed by all. Rather, the optimal policy is a benchmark to determine how efficient or inefficient alternative approaches may be. This is the best possible policy path for emissions reductions, given the economic, technological, and geophysical constraints that we have estimated.”

In other words, the assumptions that underpin the economic analyses used to justify carbon pricing are academic; they are appropriate for an theoretical modelling exercises, but they are unrealistic, impracticable and highly unlikely to be achieved in the real world. Some of the key assumptions are:

Professor Richard Tol, a long-time advocate for carbon pricing and recognised authority on estimating the damages of global warming, discusses the probability of achieving a global agreement: He said in November, 2012:

“The 18th UN Conference on climate change negotiations has just started in Doha. This column suggests that the probability of success is a mere 2.3%. Recently, over $100 million per year was spent on fruitless negotiations. Having flogged, ever harder for 18 years, the dead horse of legally binding emission targets, the UN should close that chapter and try something new.”

Tol’s article (and chart above) explain why a meaningful global agreement is highly unlikely to be achieved. For example he says:

Tol’s article reveals that it was known and predicted as long ago as 1991 that binding international agreements were a forlorn hope, with targets and timetables for emission reductions, penalties for breaches of commitments and, indeed, carbon-pricing schemes like Australia’s, incapable of drawing sufficient support to be workable.

Treasury projections of the net cost-benefit of the Australian ETS and Nordhaus’ projections of benefit (i.e. climate damages avoided), reveal Australia’s ETS would cost roughly $10 for every $1 of projected benefit to 2050, which cannot will not be achieved unless there is a global carbon price.

Therefore, if Australia continues with its ETS, it will incur the costs but receive negligible-to-no benefits.

Since participants know the situation, it is unlikely there will be a global agreement. Any country or region that attempts to run ahead and set an example – as the EU and Australia have done – will be economically  disadvantaged. Therefore, it is more than reasonable to conclude both the EU and Australian ETS schemes will be abandoned.

Big responses require high levels of confidence that they will work. Carbon-pricing schemes fail this test.

Peter Lang is a retired geologist and engineer with 40 years experience on a wide range of energy projects throughout the world, including managing energy R&D and providing policy advice for government and opposition. His experience includes: hydro, geothermal, nuclear, coal, oil, and gas plants and a wide range of energy end use management projects