Another ABC Report Built on Sand 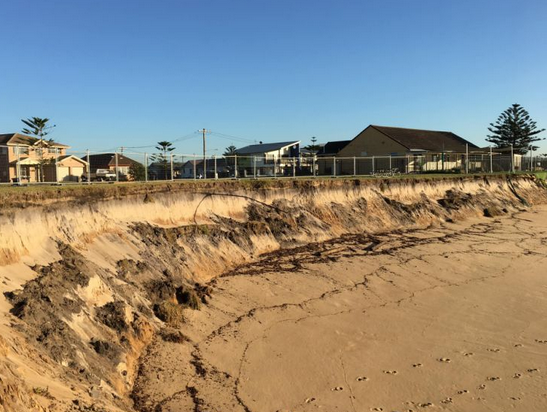 The great defence of the climate catastrophists’ narrative, as peddled by mainstream media and anyone feeding from the teat of the Big Climate Inc., is that scientific evidence is irrefutable and, concomitant with that, warmist researchers are in no way politicised. To the media’s catastropharian cheerleaders, especially those at Their ABC, it’s as if, somehow, working in a field with “science” attached removes participants from the political process. They are impartial oracles whose pronouncements are questioned only by those who are politically motivated and thus deserve to be ignored.

It should come as no surprise that the latest IPCC epistle of doom, ‘Special Report on the Ocean and Cryosphere in a Changing Climate’, is full of dire predictions and hangs its coat on the term ‘catastrophic’. But dig a little deeper and what one finds is a report that is almost wholly based on prediction models long since demonstrated to be not merely flawed but fatally so. In assessing current global mean sea level rise at 15cms over the last century, the IPCC primarily depends on unreliable satellite altimetry which does not agree with sea-level changes as measured by tide gauges.

Nor should it be a surprise that the ABC’s true believers not only decline to report the satellite-tide gauge discordance but actively present alleged examples of climate change’s depredations, neatly deep-sixing any mention of documented history in the process. A classic example went to air on September 26, courtesy of Radio National’s The World Today, whose lead item covered the IPCC report by directing its initial focus at Stockton Beach in Newcastle. The beach (pictured above) recently has suffered localised erosion at its southern end due to prevailing winter swells. Reporter Thomas Oriti interviewed a local real estate agent who assured listeners the current “crisis” was a catastrophe the like of which had never before befallen Stockton Beach.

Except that it had. 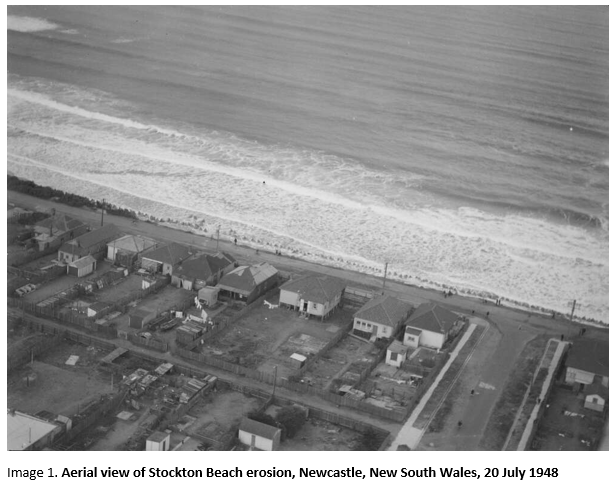 If Oriti had done some basic research, rather than relying on the anecdotal impressions of an axe-grinding local, he would have discovered that Stockton Beach has been prone to severe cyclic erosion events documented as far back as 1908, and for a sustained period from 1945 (when the dressing shed was washed away) until 1950. So bad had the problem become by 1949 that then-Premier James McGirr visited the site to assess for himself the extent of the damage. A few months later, in 1950, the Newcastle Herald reported:

There was a danger of serious erosion at Stockton between the Surf Club pavilion and the concrete block if there was a recurrence of the heavy seas of the past few days, the Lord Mayor (Ald. Quinlan) told the Newcastle Council Finance Committee last night. The committee empowered Ald. Quinlan to take whatever action might be necessary to prevent any such damage.

Were Alderman Quinlan a mayor of the modern green stamp, the “whatever action necessary” might have been easily decided upon: declare a climate emergency and urge the construction of lots more wind turbines to make the tides retreat. Below, the beach as its demise was prematurely reported in 1945. 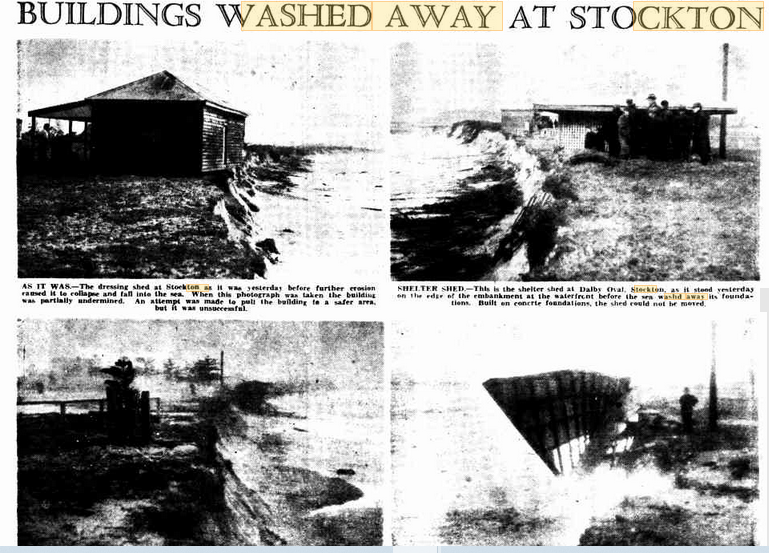 But this was not the end of the misleading nature of Oriti’s report. He subsequently asserted that global mean sea levels (GMSL) had risen 15cm during the 20th century. It seems this oft-quoted figure is derived from just one tide gauge (more accurately, a line carved on a sandstone sea wall) located at Port Arthur, Tasmania, and can in no way be extrapolated to describe global mean sea level rise across the globe. The late John Daly examined this claim way back in 2003, when the purported rise was 13cm. Believe the IPCC and, in just 16 years, the sea has surged a further 2cm. The data behind such an assertion is rubbery at best, if not fanciful. Due to a complete saros lunar cycle taking 18 years, mean sea level at any given point on the globe (which is in constant flux) can only be definitively arrived at after a full cycle.

Not satisfied with Oriti’s initial scare story, The World Today then ran a follow-up interview with Professor Matthew England, deputy director of the Climate Change Research Centre at the University of New South Wales and a contributing author to two earlier IPCC reports. Professor England made a number of alarming claims that should have seen those with even a basic familiarity with history and fact shake their heads. Here is one quote from the interview (which can be heard in full here):

For the IPCC to come out and talk about catastrophic rates of sea level rise that will inundate all of the worlds coastlines and displace tens of millions of people, even by the middle of this century, is a very confronting finding and I’m really pleased to see this because they are calling it like it is.

And then there is this gem from ABC presenter Eleanor Hall, “You have been swimming in the worlds’ oceans for years, often as part of your research. How has it changed even during your lifetime?” To which the warmist professor replied (emphasis added):

Yeah, I mean off the Tasman Sea — it’s the main place I swim [and] it’s really warmed dramatically. Our winters barely drop the temperature below 16 degrees Celsius these days. So ocean swimmers have been loving these warmer conditions, but it’s really disastrous for the polar ice caps.

Once again we run into the matter of facts. While Professor England’s remark would lead one to believe that Bondi water temperatures below 16 degrees were once the norm, the truth is that it is nothing like the truth. The chart below is instructive. 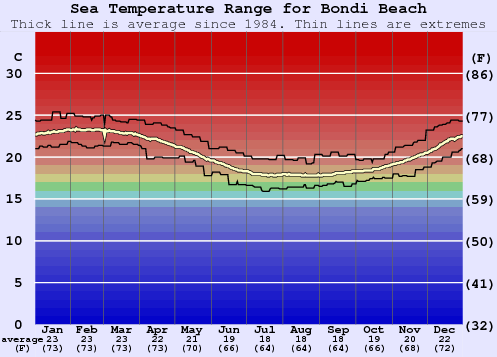 We next heard this clanger from Ms Hall, who posed the question, “One scientist calls the Artic sea-ice decline as unprecedented in at least” … wait for it…  “1000 years. Are we getting close to some of the feared tipping points for climate change for the earth’s poles?”

The learned professor replies, “We are talking a five-metre sea level rise by the year 2300, all the world’s cities will have to be thinking about sea walls at a massive cost, or abandoning huge infrastructure…”

“All” the world’s cities indeed! Let it not be said that alarmists choose their words with care — much to the relief of, say, Mexico City’s 14 million residents, who go about their business at an altitude of 2250 metres.

What marked the professor’s responses throughout the interview was a certain sloppiness with facts and details. Towards the end of the interview, and in keeping with the error-prone tone of it all, there came this:

I should say 2300 sounds does sound like a long, long time away, but it’s actually only six or seven generations, so this why you are seeing all these protests by students today. They are recognising the fact we are leaving them with a huge debt.

Except we are not. Even based on England’s alarmist predictions there will be numerous generations between now and catastrophic sea level rise. This raises the conundrum that I now don’t know who to believe: 16-year-old Scandinavian scold Greta Thunberg, who reckons wer have just 12 years to set Gaia’s house in order, or is it Professor English’s six or seven generations.

But what does it matter? After all, it’s only facts we are quibbling over when, as the IPCC asserts in its latest compendium of climate horrors, “a consistent narrative” is vital when packaging and peddling climate prophecies. In this regard Big Climate will have nothing but the highest regard for the ABC’s climate-change coverage, which sees no need to fact-check its preferred alarmist sources.

Not now at the ABC, not ever.

Sooking and Snivelling for Climate Justice

Climateers in for their COP — Part I