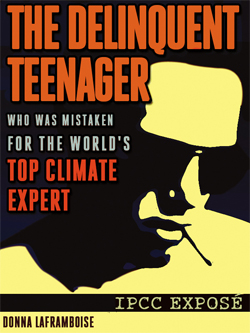 Donna Laframboise’s small study on IPCC processes has a clumsy title, The Delinquent Teenager Who Was Mistaken for the World’s Top Climate Expert.

The ‘delinquent’ is the IPCC. The study is a game-changer.

It is not about the science of human-caused global warming, it is just the first serious publication on the organisational integrity of the IPCC, a somewhat influential body.

Laframboise is a Canadian investigative journalist and feminist. She smelt a rat about the IPCC two years ago. The more she investigated, the greater the stench.

She got further clues from IPCC insiders who last year posted 678 pages of responses to a questionnaire put out by the InterAcademy Council (a sort of peak-of-peak science academy). The IAC had investigated how the IPCC could have made such egregious errors as the melting-Himalayan-glaciers howler.

Laframboise provides safeguarded hyperlinks to all her significant sources.

We have been so drunk with this desire to produce and consume more and more whatever the cost to the environment that we’re on a totally unsustainable path,” he says. “I am not going to rest easy until I have articulated in every possible forum the need to bring about major structural changes in economic growth and development. That’s the real issue. Climate change is just a part of it. (Emphasis added).

I tested the link; it worked fine. No-one is making this stuff up.

Peer Review and the IPCC

In 2008, Pachauri addressed a committee of the North Carolina legislature:

…we carry out an assessment of climate change based on peer-reviewed literature, so everything that we look at and take into account in our assessments has to carry [the] credibility of peer-reviewed publications, we don’t settle for anything less than that.

The high stature of IPCC authors

The IPCC constantly claims its scientists are pre-eminent, world-leading specialists.

Are IPCC scientists independent, i.e. capable of objectively judging the literature and not open to any public perception of bias?

The IPCC’s supposedly rigorous “Review” processes involve thousands of experts but is toothless and uninquiring.

In all this murk, only one IPCC scientist, Chris Landsea, a noted hurricane specialist, has resigned and gone public about unethical IPCC behavior.

Kevin Trenberth, a hurricane non-specialist, had gone to the press in 2004 claiming, with no science support, that recent hurricanes reflected global warming. He was lead author for the 2007 hurricane chapter. Not one other IPCC scientist stood up in agreement that Trenberth had compromised his objectivity as ‘judge’ on that chapter.

Buy The Delinquent Teenager Who Was Mistaken for the World’s Top Climate Expert online:

Now They Want to ‘Fix’ the Climate