Can we really take the ocean’s temperature?

It is for these reasons that the oceans are sometimes called the thermal and inertial flywheels of the climate system. The oceans confer a relative stability on the climate system, and when changes in ocean characteristics occur, such as through an ENSO cycle, this quickly and markedly affects the atmosphere and its weather systems. 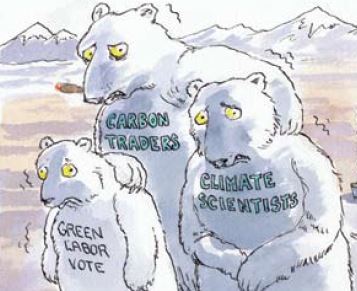 Given these facts, many scientists argue that the graph of historic atmospheric temperature is less suitable as a means of judging global climate change than would be an equivalent graph of ocean temperature, or, even better, a graph of ocean heat content.

A record of changing ocean surface temperature over the last 100 years exists, and displays broad similarities in shape with the air temperature curve (i.e., shows 20th century warming). However, early surface water temperature measurements were made from sailing ships using samples collected with different types of containers — including metal, wooden, plastic and canvas buckets, all of which exhibit different thermal behaviour. As sail gave way to steam, engine inlet water was used to measure ‘surface’ temperatures, but ships of different size have inlets at different intake depths, which vary again according to the amount of cargo on board. In addition, few of the measurements used to compile the temperature graph were systematically recorded from exactly the same location over time. Accordingly, the observations on which the ocean surface temperature graph is founded are of doubtful accuracy prior to about the last two decades, at which time accurate measurements made from drifting buoys and satellite sensors became available.

Taxing Air, by Bob Carter and John Spooner,
can be ordered here

For the past half century, marine temperature observations have also been collected from the subsurface ocean under an international programme coordinated by the World Meteorological Organisation. Selected regular commercial ships deploy expendable bathythermograph (XBT) instruments to register temperature and salinity at depth. Meanwhile, a determination grew in the scientific community to deploy a worldwide system of temperature measuring buoys that would gather accurate measurements throughout the upper ocean.

The first buoys of what is known as the Argo network were launched in 2003, and more than 3,000 such buoys now operate throughout the world ocean. Each buoy descends to a depth of 2,000 metres, after which it measures the temperature through the water column as it ascends slowly to the surface, where it radios the results back to the laboratory via satellite.

It was widely anticipated that the results of the Argo system would show a warming trend in the ocean of 2 degrees C/century, as predicted by climate models. In reality, nine years of observations now demonstrate that the trend in ocean heat content has been either flat or slightly declining during the period since 2003. 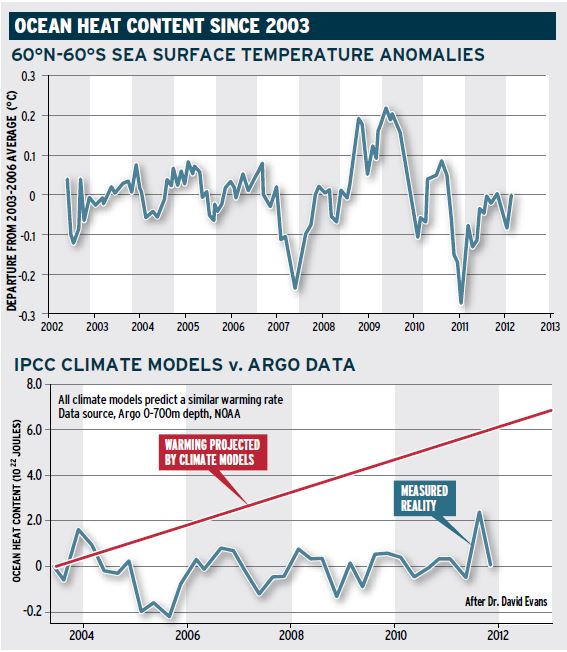 Though it is early days yet, this lack of warming in the Argo measurements mirrors the atmospheric temperature measurements made over the same period. Taken together, then, the ocean and atmospheric measurements establish that the late 20th century phase of global warming has stopped, a fact conceded in official releases from the British Meteorological Office in October 2012 and January 2013, and also by Rajendra Pachauri, Chairman of the IPCC, in February, 2013.

An important effect of a heating ocean is the expansion that occurs in the warmer water, which drives a global sea-level rise. Thus the slackening of the rate of sea-level rise that has been recorded over the last few years by both satellite radar ranging and tide gauge measurements is also consistent with the lack of warming of the ocean.

No increase in air temperature, no increase in ocean temperature and no increase in the rate of global sea-level rise. These three independent but supporting indicators suggest that it is now past time to rethink climate policies that are aimed at ‘preventing’ dangerous global warming.

This is an extract from Taxing Air: facts and fallacies about climate change by Bob Carter and John Spooner. The book can be ordered here.
,

Shakedown on the Seine