Greta Thunberg and her Legion of Hacks 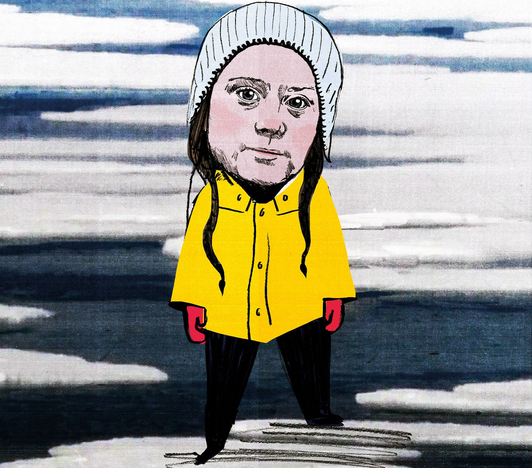 Thank God for middle-aged men! That was my thought after reading Claire Harvey’s latest asininity in the Sunday Telegraph.  ‘Who’s afraid of the big bad teenage girl?’ she asks.  Yes, its middle-aged men, according the newspaper’s deputy editor, who tells us that teen climate activist Greta Thunberg and her skip-school-for-the-planet apostles fill the breasts of “a whole lot of middle-aged men” with fear. In her defence of pigtailed Greta, or to be more accurate, her excoriation of those who dare question the figurehead leader of the children’s climate crusade, she writes

Swedish teenage Greta Thunberg is, I think, an inspiring young woman who never sought out the fame she’s found, and who is now being vilified around the world by adults who can’t cope with a girl with an opinion.

Thunberg is remorselessly mocked, vilified and made fun of by conservatives around the world because she dares to express her fear that the world she and her generation are about to inherit is seriously compromised. 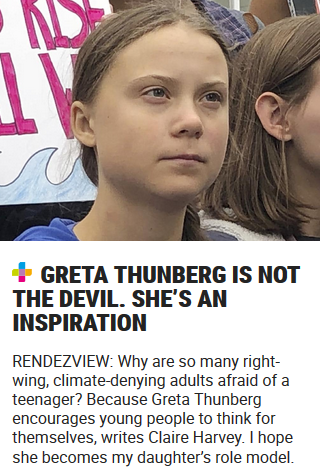 Ms Harvey’s latest literary extrusion is paywalled, but you’ll get its tone and flavour from the Sunday Telegraph online blurb (reproduced at right). If Greta never sought fame it was very effectively sought on her behalf by her parents, Svante Thunberg, an actor, and opera star wife Malena Ernman. Secondly, conservatives have certainly mocked her movement but they have not vilified its leader.  The columnists I have read uniformly regard her as a victim of manipulative activists who have exploited the don’t-question-me moral certitude with which her disability has invested her. (Standpoint magazine has a must-read piece on the creation and promotion of Sweden’s messianic moppet.) She is questioned not because she is a child with an opinion but because that opinion is expressed as nothing more than slogans.

Ms Harvey, who was recently informing one and all that she is a nicer person and a better Christian than Israel Folau, is in lockstep with the ABC (of course), Mama Mia and, inevitably,  The Guardian:

In July, Thunberg hit back at the Australian News Corp columnist Andrew Bolt for writing a deeply offensive column that mocked her diagnosis.

He criticised her two-week trip across the Atlantic on a solar-powered yacht because, he said “she refuses to fly and heat the planet with an aeroplane’s global warming gasses”.

Thunberg responded by tweeting that she was “deeply disturbed” by the “hate and conspiracy campaigns” run by climate deniers like Bolt.

Why is Greta Thunberg so triggering? How can a 16-year-old girl in plaits, who has dedicated herself to the not-exactly sinister, authoritarian plot of trying to save the planet from extinction, inspire such incandescent rage?

Part of the reason she inspires such rage, of course, is blindingly obvious. Climate change is terrifying. The Amazon is burning. So too is the Savannah. Parts of the Arctic are on fire. Sea levels are rising. There are more vicious storms and wildfires and droughts and floods. Denial is easier than confronting the terrifying truth.

Even for someone who spends a lot of time on Twitter, some of the criticism levelled at Thunberg is astonishing. It is, simultaneously, the most vicious and the most fatuous kind of playground bullying. The Australian conservative climate change denier Andrew Bolt called her “deeply disturbed” and “freakishly influential” (the use of “freakish”, we can assume, was not incidental.) The former UKIP funder, Arron Banks, tweeted “Freaking yacht accidents do happen in August” (as above.) Brendan O’Neill of Spiked called her a “millenarian weirdo” (nope, still not incidental) in a piece that referred nastily to her “monotone voice” and “the look of apocalyptic dread in her eyes”.

But who’s the real freak – the activist whose determination has single-handedly started a powerful global movement for change, or the middle-aged man taunting a child with Asperger syndrome from behind the safety of their computer screens?

Incandescent with rage?  This is actually what O’Neill actually wrote:

Anyone who doubts that the green movement is morphing into a millenarian cult should take a close look at Greta Thunberg. This poor young woman increasingly looks and sounds like a cult member. The monotone voice. The look of apocalyptic dread in her eyes. The explicit talk of the coming great ‘fire’ that will punish us for our eco-sins. There is something chilling and positively pre-modern about Ms Thunberg. One can imagine her in a sparse wooden church in the Plymouth Colony in the 1600s warning parishioners of the hellfire that will rain upon them if they fail to give up their witches.

So all these middle-aged men, incandescent with rage, amount  to Andrew Bolt, Brendan O’Neill and Canadian politician Maxime Bernier.  Their main sin, it appears, is to have mentioned her Asperger’s and other disabilities  – disabilities that were publicised by her parents and that she, herself, touts as the “superpower” that grants her unique insights and demands she be taken seriously.

In response to her critics, Thunberg said on Twitter on September 1, “When haters go after your looks and differences, it means they have nowhere left to go.  And then you know you are winning! I have Aspergers and that means I’m sometimes a bit different from the norm.  And, given the right circumstances, being different is a superpower.’

So, yes, Greta trades on her disabilities and her looks. Does anyone really believe the pigtails are not contrived? And finally we get to the real nub of the matter:

They [the critics] fear, I think, that Greta’s words  are written by others, that she’s manipulated by smarter adults with an agenda for economy-crushing renewables at any cost, and that she’s creating unnecessary fear about the future among impressionable children.

Got it in one, Ms Harvey.  If, as she writes, it is middle-aged men who are calling this child and her exploiters to account, thank God for middle-aged men.