I feel in my innards that climate alarm is a scam. I felt the same about bird flu and other exotic infectious diseases that have in recent years been regularly held up as threatening our species; though I admit that the HIV- inspired ‘grim reaper’ ads unnerved me at the time.

I can’t recall being persuaded by the Club of Rome alarmists of the early 1970s. British writer and publisher Tom Stacey (in a preface to Bob Carter’s 2010 book Climate: The Counter Consensus) commented on his firm publishing Blueprint for Survival in 1972. Population and resource-depletion Armageddon was predicted to occur before 2000. It was backed, he says, by “38 of Britain’s most honoured scientists, economists and environmentalists, including 18 professors, two Nobel laureates, and seven Fellows of The Royal Society.” I can find no record of these fine fellows being mocked and derided by their colleagues for their alarmist predictions.

One of the doomsday predictions was that “hydrocarbon fuel resources would [by 2000] be well exhausted.” Now that would have fixed anthropogenic global warming (AGW), would it not? But then global cooling was soon to come to the fore in the middle 1970s as a threat to humanity. It’s enough to give any grounded scientist 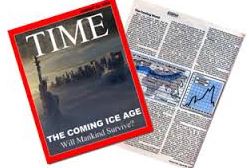 experiencing this chain of authoritative predictions a bout of cognitive dissonance.

American writer H. L. Menken provided his own perspective on scares in 1918.

“Civilization, in fact, grows more and more maudlin and hysterical; especially under democracy it tends to degenerate into a mere combat of crazes; the whole aim of practical politics is to keep the populace alarmed (and hence clamorous to be led to safety) by menacing it with an endless series of hobgoblins, most of them imaginary.”

One hundred years’ later nothing has changed. Antibiotic-resistant germs and a life-giving gas are out to get us; as potentially are AI robots and aliens, if Stephen Hawking and other scientific luminaries are to be believed.

But hold on, AGW might be a real threat. My brain, as distinct from my innards, tells me that I don’t know. To me there is no fault in logic in explaining that burning fossil fuels produces CO2 and, in turn, water vapour; which, unless abated, results in catastrophic AGW. It is a science question of which I have no expertise. My concern, however, is that this particular piece of science seems tenuous to me as a layman (as I will come to) and is in process of subverting economic progress by undermining the production of cheap and reliable energy and, to boot, with no noticeable effect in reducing concentrations of CO2 in the atmosphere.

I am told that the science is settled; apparently this is because there is a consensus among “climate scientists”. I have four problems. First, ‘settled science’ offends my working assumption that all scientific conclusions are forever up for challenge. Second, it is patently anti-scientific, and ignores scientific progress and the overturning of past consensuses, to accept a one-to-one correspondence between the truth and any prevailing consensus. Third, the currently prevailing consensus has important breaches, with numbers of well-credentialed maverick climate scientists taking a different view. Fourth, as I noted above, this piece of science is intrinsically tenuous.

I say it is tenuous because it is wholly based on modelling. To state the obvious, controlled experiments cannot be performed with the global climate. Therefore, my uneducated guess is that the vast preponderance of scientific inquiry bears not at all on the central issue of AGW but on a host of derivative issues; e.g., how GW affects the frequency and intensity of storms or how reduced ocean alkalinity, as a result of increases in CO2, affects particular sea life. None of this research establishes a link between CO2 and GW. It may live off that supposed linkage, but it neither adds to nor detracts from the modelling on which the linkage is based.

It is worth labouring the point. There is no in-principle contention about GW. Leaving aside suggestions by some that the data might have been massaged upwards, everyone agrees that some material warming has occurred since the end of the little ice age. Equally, everyone agrees that industrialisation has led to additions to CO2 in the atmosphere. The contention is about the extent to which additions to CO2 have caused GW. Quite simply there is no way of establishing the existence and strength of such a causal relationship other than by modelling, and that is intrinsically dodgy.

I know a little about macroeconomic models. Macroeconomic modelling is fraught with difficulties. The divergent ways individual agents respond to stimuli and to each other’s responses makes aggregation questionable, yet without aggregation economic modelling is impractical. Whatever predictions they throw out are unreliable. None has ever presciently predicted a deep recession. I suggest that climate models are equally flawed, as the IPCC models have shown in materially over-predicting temperature rises.

All predictive models of complex systems depend on sorting out and scoring the direction of the effect each included variable has on others. All must evaluate and encompass feedback mechanisms among the included variables. All assume that parameters remain the same or in lockstep with other variables. All are sensitive to changed assumptions and to the quality of empirical data. And, by definition, unknown variables are not included. This black-box process has only a loose connection to science.

Would several teams of statisticians and climatologists totally independent of each other and knowing nothing about the history of this issue build climate models giving proximately identical results and predictions? I seriously doubt it. People out there in Layman’s Land should take a sceptical pill. There is no conclusive science behind AGW; there are imperfect (related) models of a highly complex and dynamic system. This doesn’t mean that advocates of AGW are wrong. But the results they claim are written on a flimsy piece of papyrus not on stone.

Finally, whatever you think of AGW only political blindness to hard evidence would convince you that solar and/or wind is the answer. They are unreliable sources of base-load power; and, in part because of that, too expensive. All that effort, all that money, all that pain delivered to our industries in the West, and CO2 goes on rising; as it is destined to do far into the future, as those in the developing world build reliable power stations based around cheap fossil fuels. Below is the latest graph of CO2 parts per million in the atmosphere. There is no sign of abatement. Feel-good failure follows when symbolism takes the place of practicality. 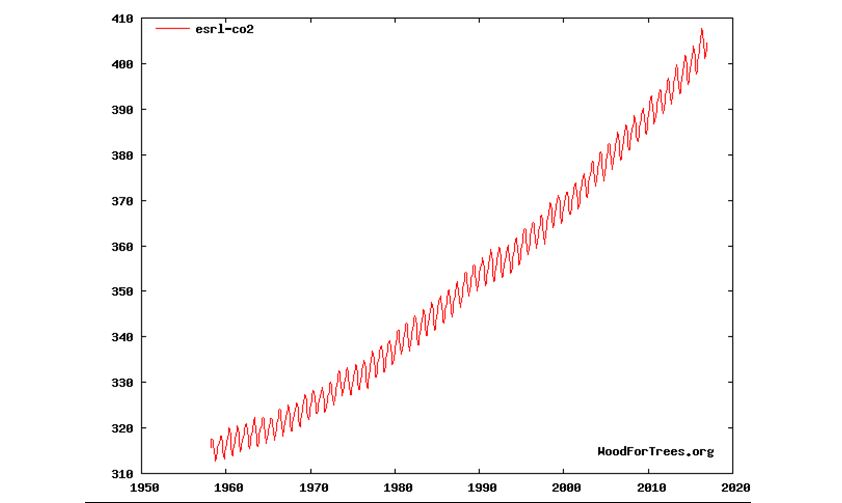 34 thoughts on “Of Hot Goblins and Hobgoblins”