It is a sad thing when a wincingly dated Australian movie tells you more about bushfires than all the news reports of the past week’s infernos put together.

The flick is Stork, shot in Melbourne’s hinterland around Eltham and adjoining  Nillumbik, where four decades later Black Saturday’s flames would claim roughly two-thirds of the 173 people who perished that day across all of Victoria. You will need to watch closely (if you can find a copy of the movie), but it will be worth the effort. What needs to be noticed is the background landscape in a number of incidental scenes, as in the still below: 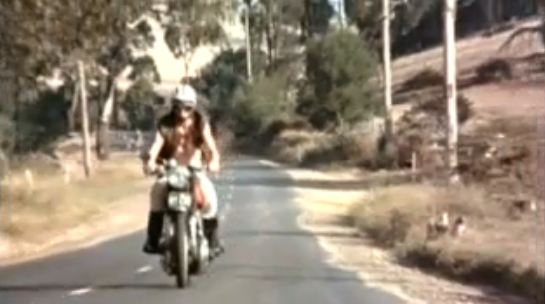 Notice the roadsides? Not too many trees, blue sky visible, light grass cover – in other words, terrain that has been shaped and groomed by the hand of man and would have offered little sustenance to a runaway inferno.

Now move the clock forward by four decades and look at the picture below, taken just prior to Black Saturday and showing a typical roadside in the same area: 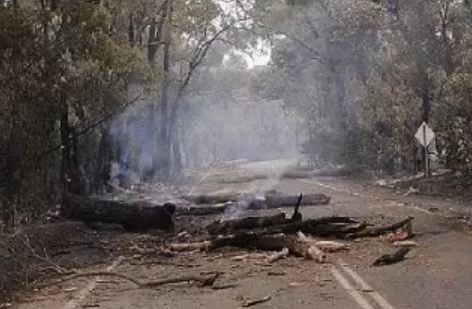 Fire has passed through, so the understorey and fallen fuel load is gone, but even after a good scorching the death-trap density of the foliage remains obvious. More than that, the road is a tunnel through a smother of trees, which have been allowed to grow right to the bitumen’s edge. On Black Saturday, many died on roads exactly like that one. Even more perished in their homes, unable to get through the walls of flames that blocked their front gates.

It should require little thought to grasp that more dry wood means a bigger flame, not to mention a radiant heat whose intensity increases exponentially as the fuel load grows. (Strike a single match and observe the flame; now repeat with two burning matches and the flame will be three times bigger).  Reduce that carpet of fallen branches, bark tinder and incendiary shrubs, and uncontrolled fires will do much less damage and claim far fewer lives.

Instead, we have been treated once again to an exhibition of what happens when a loud and cultish green ignorance works its will on both the landscape and public policy. The satellite image of a burning Tasmania says it all: 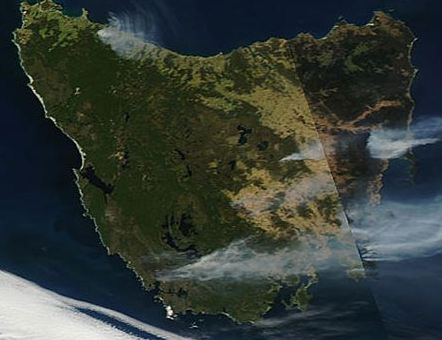 Excessive fuel loads feed massive fires? Don’t be silly, say those who count themselves in Nature’s corner! The past week’s infernos, as symptoms of global warming, are punishment for mankind’s sins, and the only cure is taxes, inflated electricity bills, restricted air travel and an international trade in certificates signifying ownership of nothing more tangible than tranches of thin air. In distant Britain, The Guardian’s reliably bizarre George Monbiot  even managed to paint volunteer fireman Tony Abbott as an eco-arsonist.

As for reducing fuel levels with controlled, “cool” burns during spring and autumn, the cultists will always fight that tooth and nail, as they did for years in and around Nillumbik. A procession of fire experts visited the district and saw nothing but disaster in the making, but their reports and warnings were rejected by a council whose officers were busy ticketing residents for collecting fallen wood from the verges in front of their properties, amongst other offences against green goodness. Dare to cut down a tree, even on private land, and the fines were ruinous. The video below, shot not long before Black Saturday, captures just how overgrown the district had become.

Such stern measures were needed, the council and its green supporters insisted, because an overgrown Nillumbik was “a natural Nillumbik” and it would be wicked to interfere with Mother Nature’s grand plan. Except, as those fleeting scenes in Stork attest, the Nillumbik that burned on February 7, 2009, could be considered “natural” only if the Macquarie Dictionary has re-defined the word to mean “neglected in the name of an idiotic green romanticism.” In the four decades since the movie’s crew departed, and even as the district’s population boomed, the landscape was turned quite deliberately and methodically into a tangled, sprawling firetrap.

That culpable stupidity was nowhere better illustrated than in the local council’s advice to home-owners, who were urged in a shire-sponsored pamphlet to plant a species of ti-tree it was said would attract butterflies to their yards. The fact that the plant’s natural habitat is the riparian zone along creek banks, not hillsides and beneath the eaves of wooden homes, was ignored, as was CFA volunteers’ habit of referring to the shrub as “petrol bush”.

All of this and much more was dragged to light by the Bushfires Royal Commission, so you might think the anti-burning brigade would have kept a diplomatic silence for the next few years. After all, 173 charred bodies make a poor policy statement.  But that would be to credit green activists with the capacity for shame — a commodity repeatedly demonstrated to be rare as common sense in those circles. Victoria in 2009 or Tasmania this year, the loopiness is unrelenting, as is the ongoing damage being inflicted by a stewardship of Australia’s forests driven by ideology.

As late as June, 2012, Tasmanian Greens MP and the party’s treasury spokesman, Tim Morris, was churning out press releases denouncing forest-products outfit Norske Skog for torching unsalvageable timber after an area near the town of Maydena was logged.

“It should also have known that attempting to burn forest waste at this time of year is highly likely to have this unacceptable result.”

“We’re all better off when this Neanderthal practice stops and disposing of forest by-products is done far more responsibly. The future’s bright without forestry’s smoke pollution.”

Morris’ voice was but one in the chorus demanding that Tasmania be transformed into a bonfire awaiting only a spell of hot, dry weather and a spark. If any of this seems familiar to mainland readers, it may be that it has stirred memories of the same anti-burning arguments being put in NSW and Victoria. Here is one memorable entry, published in the Fairfax press in September 2008, just four months before a downed powerline in a paddock near Kilmore sparked the blaze that scoured Nillumbik:

In the coming decades, native plants and animals will face enough problems – most significantly from human-induced climate chaos – without having to dodge armies of public servants armed with lighters. Guesswork and winter smoke are not enough to protect our towns and assets now, and the risk of bushfires increases with the rise in carbon dioxide.

Once again, viewed through the green prism, the threat is not the fuel-fed flames that killed so many on Black Saturday and the other infamous dates — Red Tuesday, Ash Wednesday, Black Friday — in Australia’s long history of disaster by fire. No, the real peril is carbon dioxide, at least as far as the Greens’ publishing arm, Fairfax Media, is concerned. Why, in addition to a legion of environment writers transcribing the latest alarmist press releases from the CSIRO and BoM, the newspaper chain has just appointed a “carbon economy editor.” If and when that carbon economy emerges, he will be ready and waiting. In the meantime, his beat would seem to be limited to covering the business of producing dry ice.

Instead of one more catastropharian preaching doom in the daily press, what we really need is a golden-oldies movie critic – someone to haul Stork out of the vault and absorb the movie’s long-ignored evidence of 40 relentless years of hazard creation.

Roger Franklin, editor at Quadrant Online, is the author of Inferno: The Day Victoria Burned

A Lobbyist’s Notion of a Think Tank