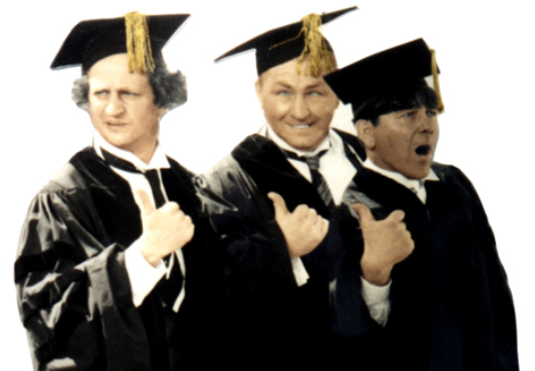 The one-sided Conversation’s “in-depth analysis” has reached a pinnacle with the publication by three academic bushfire experts of a masterpiece in apparent self-contradiction. Below you will find their graph, which purports to show that prophylactic burning makes the bush more prone to fire, this based on “fine shrub biomass”  — the component of fuel that is their focus — being the same 50 years later as one year after a fire. The problem is that the academics have averaged apples with oranges and come up with bananas. Worst of all, they don’t seem to comprehend the difference between “stand age” and “time since fire”.

There is more to this than another antic episode in academia’s long history of preferring theory to demonstrable, real world fact and consequence. Sadly for the health of the bush, this is a part of the addled orthodoxy that makes sure Australia burns and burns again. 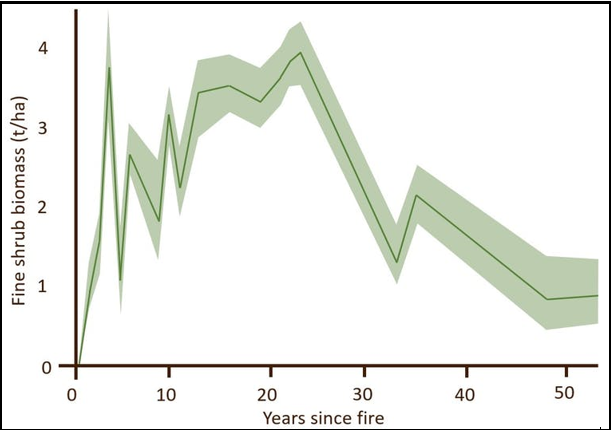 Had their paper been critically reviewed, it must surely have been noticed that their graph doesn’t match their story that “burning made forests more flammable for 43 years”. What it shows is the same amount of ‘fine shrub’ fuel at around 1-2.5, 5, 9, 32-35 and 39-43 years after fire.

Nor does their graph match the true story from 60 years of empirical data analysed by fire managers and scientists in Western Australia. Ecological maintenance by mild burning prevents firestorms and megafires during severe fire seasons, provided that a minimum of 8 to 10 per cent of the landscape is treated each year. Treatment is effective for up to six years. So unless half the landscape is properly maintained we will continue to have disasters in extreme weather. Professors Zylstra, Lindenmayer and Bradshaw say:

The forests were unlikely to burn for five to seven years after a prescribed burn. This finding supported earlier work in the same region. But there’s more to the story.

However, their graph (above) shows the weight of ‘fine shrub fuels’ exploding from zero to four tonnes per hectare, plummeting to one tonne and then soaring back to three tonnes per hectare during the five-to-seven year period after fire. That obviously didn’t happen anywhere. The professors appear to have combined data from high intensity fires and gentle burns in different forest types and at different times since the different types of fires.

The fairdinkum experts who did that “earlier work” measured the impact of prescribed burning on the area of subsequent wildfires. They confirmed what all fire managers know from experience: that burning can maintain healthy and safe landscapes. The professors further say that, in the decade before Black Summer

New South Wales National Parks and Wildlife Service doubled the area of prescribed burns compared to the previous decade. In fact, the area of national park burned that decade was the largest in the state’s history. But as we now know, it had little effect.

The empirical data from effective burning in Western Australia indicate that doubling the proportion of NSW National Parks burnt by prescription — from a miniscule 1 per cent to a tiny 2 per cent of the area — could not mitigate wildfires in severe conditions, even if that burning had really happened. In fact, the proportional area burnt wasn’t doubled because the area of parks increased substantially in the last decade. The total area of national park was the largest in the state’s history when we suffered Black Summer. It’s no mere coincidence, in my opinion.

The Professors’ statement that hazard reduction burning in national parks’ had little effect is incorrect. Most of that burning occurred close to suburbia, and much of it was high intensity. This might better be called ‘hazard production burning’ because the bureaucrats in charge haven’t learnt how to burn for optimum results, the regulations and methods they’ve developed making it virtually impossible to burn gently.

The authorities typically light lines of fire around perimeters, from the bottoms of slopes and across the wind, just wherever the access track happens to be. This ensures that the fire immediately develops the maximum possible intensity and rate of spread under the prevailing conditions. All three photos in the ABC’s Fact Check back Zylstra’s correct statement that doubling the area of burning didn’t help and each illustrates this basic problem.

The Professors are spot on in saying that burning “can actually make forests more flammable”. The problem is that in southeastern Australia, academics and fire chiefs have taken charge from experienced practitioners. 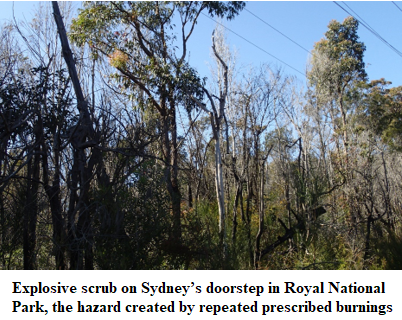 It is effectively illegal to burn frequently and gently enough in NSW to maintain a healthy, safe, resilient and diverse landscape. Eucalypt forests need mild fires at intervals of three to six years.

Zylstra et al. say they based their research on the “long known” self-thinning rule as it applies to shrub layers in forests. Essentially, their hypothesis is that ‘self-thinning’ of shrubs reduces fuel over time if forests are locked up. The well-established “self-thinning rule” has no application to mixed stands or understoreys and it defines the upper limit of biomass on a site as smaller/weaker stems die out. It has nothing to do with their flawed hypothesis.

Here’s how my colleague Dr. Huiqan Bi, a world-leading expert in forest growth, including native eucalypt forests, puts it:

The Self-Thinning Rule defines a density-dependent upper frontier of stand biomass for even-aged pure plant stands in a given environment with a power function: B KN = β  where B is the total stand biomass per unit area, N is stand density, K is a species-specific and environment-specific constant, and β = –0.5 is the hypothesized self-thinning exponent (Yoda et al. 1963, White and Harper 1970, White 1980, 1981, 1985, Westoby and Howell 1981, Westoby 1984, Whittington 1984).

The problem of dense understoreys and heavy three-dimensionally continuous fuels is a consequence of hot fires in the absence of ecological maintenance by frequent mild burning. Gentle fire kills non-lignotuberous woody seedings. Intense fire germinates them in their millions. The Professors say

Indigenous practitioners did not attempt to burn vast areas at once. Instead, they cooperated with natural processes such as self-thinning, so country was allowed to age.

Australia’s forests have controlled their own fire risk since they were part of the Gondwana super-continent. We should respect, rather than disrupt, these ancient natural processes.

That’s how Aboriginal people survived more than 40,000 years of sometimes extreme natural climate change without boots, overalls, fire engines, waterbombers, computer models or advice from academics and fire chiefs. Their ecological burning maintained open, healthy and safe uneven-aged forests of blackbutt, which have now largely been replaced by young even-aged forests described by Professor Lindenmayer and many others as fire-sensitive, wet sclerophyll forests. These days the blackbutts are known as mountain ash.

Zylstra, Lindenmayer and Bradshaw tell us

Cooperating with country today means moving away from prescribed burning across large areas. Frequent burns may be useful only close to homes, or in other locations where we know with confidence they can achieve an ecological goal or help firefighters stop a burning edge. Elsewhere, we should work with forest landscapes and allow them to become open again. We can support this process by refocusing fire management to quickly suppress fire when it does break out.

Foresters learnt 60 years ago that fire suppression cannot work, that firebreaks don’t stop firestorms and ember showers, that we must manage the whole landscape as Aborigines did. Since the late 20th Century, academics and fire chiefs have prevailed over fairdinkum science and traditional knowledge . They gave us Black Summer and blamed it on climate change. They gave us the dangerous lunacy of ‘residual risk’ management. Now we have the huge problem of dense scrub growth exacerbated by megafires.

Perhaps, rather than trying to put their spin on traditional Aboriginal knowledge, the academics should let the real experts speak for themselves. Here’s what Aboriginal expert Victor Steffensen told NSW Koala Inquiry at the height of Black Summer:

When the big mega fire comes then the invasive wattles, tea-trees and other plants that are totally flammable get up over six-foot high and then become an understorey that thickens so thick that it starts to lose the value and identity of those ecosystems.

When they catch alight then we go through another phase of fire that kills our trees and our parent trees. Soon you will have nothing but dead trees if we just do nothing and allow these phases of wildfires to continue to ravage our landscape.

We need recovery teams out there right now after these burns in the next season burning leaf litter to breakdown and kill the young invasive flammable ones and start with the right temperatures to bring up the right plants and the right grasses to come back in that country that is going to be lower, healthy with more food sources and diversity.

Steffensen clearly appreciates the nature of the problem, if, perhaps, not its magnitude. Zylstra et al. seem to understand neither aspect. We are in desperate need of broad-area burning across all tenures in the landscape. It cannot be done without aerial ignition. In the 1960s, our whitefella elders, such as Phil Cheney and David Packham, did it with small, fixed-wing aircraft. We have much more flexible technology now. We can re-establish a healthy and safe landscape if we have the will. After that, maintenance is easy, as it was when I started working as a forester in open grassy ecosystems in the late 1970s.

Traditional burning, black, white and brindle, is based on basic physical and biological principles: top down, into the wind, lighting spots which gradually coalesce, starting from highest, driest, most exposed sites and filling in lower, sheltered, damper areas as they dry out. Timing is determined by rates of accumulation and curing of the major natural fuel components in any particular ecosystem.

Bushies have always sought maximum benefit with minimum effort. You burn as soon as fire will carry and before it can get out of control.

Vic Jurskis, a frequent contributor, is the author of  The Great Koala Scam, which can be ordered here and Firestick Ecology: Fairdinkum Science in Plain English

5 thoughts on “Academic Expertise? So That’s What It’s Called”