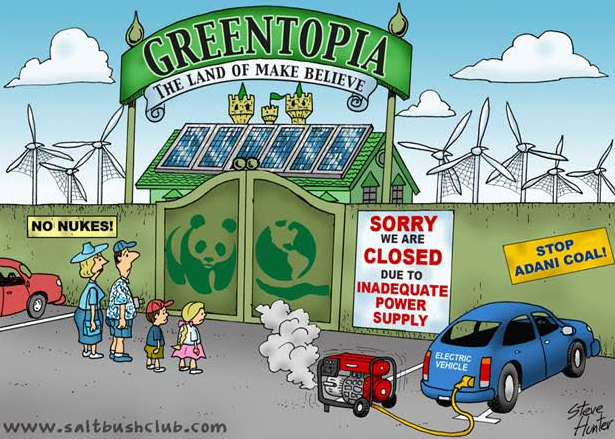 I’m not a lawyer. So, when I see that the Queensland Land Court has made a far-reaching, seemingly bizarre, decision, my first question is ‘what is the Land Court?’. It was established in 2000. It’s brief:

♦ determines claims for compensation for the resumption of land

Apparently its decisions are not binding on the Queensland government and, presumably, they can be appealed. I noticed that the Land Court is down the pecking order from the Supreme Court, the District Court, and the Planning and Environment Court. Might be expensive to run the gauntlet. Just a guess.

The case concerned an application by Clive Palmer to build a Galilee Basin coal mine. Judge Fleur Kingham came down against the application. Ho-hum, except for the reasoning. In part: the coal when exported and burnt overseas would contribute to climate change. In turn, this would adversely affect Queenslanders, including “First Nations” people. A long bow. But, on the other hand, as I’ll suggest below, not necessarily an illogical one.

Reportedly groups called Youth Verdict and Bimblebox Alliance brought the case and were represented by the Environmental Defenders Office (EDO) – funded, incidentally, to the tune of $9.8 million over four years by the federal budget. Go figure: taxpayers’ money to wage lawfare against development. Insane times when the very source of our economic wellbeing is under attack from ourselves.

I admit to not being able to keep up with the proliferation of international, governmental, semi-governmental and private-sector organisations fighting to save the planet from CO2 (and destroy our prosperity and civilisation). There’s a million of ‘em, as Jimmy Durante might have said in a bygone age of reason and good sense, when, among other things, people understood that prosperity didn’t arise out of thin air. And when judges applied a dollop of common sense to their decision-making.

There was a case last year. Australian Federal Court judge Mordy Bromberg (hmm, not surprisingly) sided with a group of eight female teenagers and their litigation guardian, an 86-year-old Catholic nun, intent on stopping a particular mining development in New South Wales. They brought a class action arguing that the federal minister for the environment had a common-law duty of care to young people by protecting them from climate change when considering the approval of new mines. Subsequently the full Federal Court threw out Bromberg’s ruling.

Sanity seemingly restored. But, as the Queensland case demonstrates, it was only a temporary reprieve. Emissions reduction is now the law of the land – in both the federal and state spheres. Reluctantly, yet compelled by the zeitgeist, Scott Morrison also agreed to a net zero target by 2050 at COP26 in Glasgow. Thus, it has come about, lefty lawyers and judges have been given solid legal ground to stymie any new fossil-fuel developments. In any event, solid enough for them in their abiding wokeness. Game, set and match.

After all, when all is said and done, climate change is an existential threat. Demur not, it must be so. Governments have gone to extraordinary lengths to pass laws and make international commitments to cut emissions to net zero. And this is quite apart from showing they mean it by blowing up coal-fired powers stations. To boot, voters clearly approve. Dan’s the man, etc. In such circumstances, it makes no sense at all to allow new developments which will increase global emissions. Even I can see the compelling logic of that, never mind a woke judge. Giving environmental go-aheads would be tantamount to acting beyond the law. It would be ultra vires.

Seriously, folks, the interplay of domestic laws, international commitments and present-day courts spell the end of any new coal or gas developments in Australia. De facto, the activists, the Greens and Teals et al, have what they want. Labor is also a winner by escaping the political punishment of banning new developments; that is, by washing its hands of responsibility. It’s the courts, not us.

Of course, life isn’t fair. There are losers. Abstracting from those rich enough not to care, which for the most part includes Teals, lawyers and judges, near enough to twenty-six million of them. Within that twenty-six million will be idealistic placard-carrying callow youths and indigenous save-our-cultural-heritage people. They might eventually learn that prosperity is not costless. Or, maybe not.

Australia is a lucky country. Something might turn up. Lithium, cobalt and other new-age minerals? The realisation of green hydrogen super-power status? On the other hand, luck has a habit of running out when you recklessly throw away your inherent advantages. We shall see. In the meantime, a denouement of sorts is not far away; only a short time before the demolition of another couple of coal-fired power stations. Hang on to your candles.

The Warmists Are Starting to Sweat