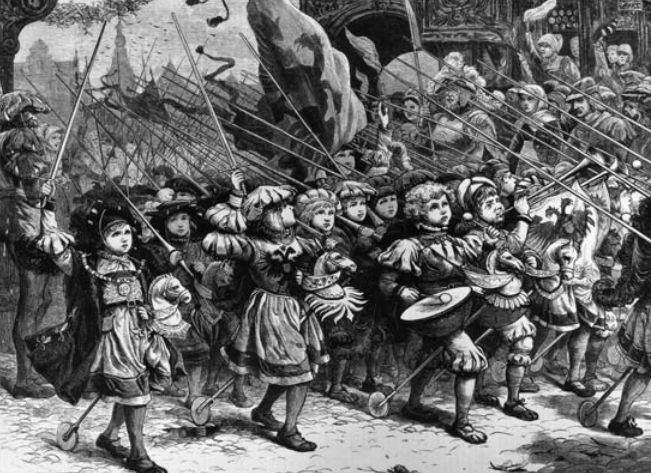 School students are being recruited and organised to strike from school tomorrow, 15 March. The website, schoolstrike4climate.com claims the purpose is “to tell our politicians to take our futures seriously and treat climate change for what it is – a crisis.”

After careful analysis of historical trends and with far more reliability than a United Nations’ “scientific consensus”, I’m prepared to boldly predict the political climate will not be warmed or cooled one-tenth of a degree by kids striking. Like all prophets of the apocalypse, the stamping and tramping of their furious little feet will have little impact in and on the real world. The Labor-Greens coalition will still be environmental extremists denying developing nations cheap, reliable electricity and aspiring to deliver Australians intermittent electricity at any cost. The Coalition will still present as lukewarm environmental realists while wooing voters from the centre-left with half measures of the Greens’ full-strength moonbattery.

Real grownups will observe there’s a reason schoolkids aren’t allowed to get married, sign contracts, fight for their nation, get a driver’s licence, drink alcohol, smoke tobacco, or vote on matters of national importance. Their developing brains aren’t mature enough to weigh the balance of evidence, consider all the consequences and make objectively rational decisions. They can barely cross the road safely or wear clothes properly. They are important, but they are children – undeveloped clumps of cells, if you prefer.

The student strike will achieve absolutely nothing but the squealing delight of the overwhelming majority to be free of classes for a few precious hours and maybe get on TV. It would be noteworthy if they were protesting on their weekend, giving up fast food or their smartphones and game consoles in an action that demonstrated real commitment. But skipping school, well, who cares? They’re only hurting themselves. Sensible adults will dismiss the student strike as cute but no better than the homogeneous, weightless opinion of unqualified individuals.

Our education system has its work cut out competing with the results of such famous contributors to global intelligence as Kazakhstan. Kids in our education system need as much class time as possible being taught not what to think but how to think. Literacy would be a good start, of course, but the nationalised curriculum would then be at risk of kids grasping and analysing the world and that simply would not do.

Instead, Comrade Shorten and similar ministers for propaganda will applaud those good little people and, with hands clasped together in adoration, will extol the virtues of their global citizenship. They will bask in the warmth of his praise and in scenes reminiscent of that skit from the Life of Brian will chorus as one, “Yes, we’re all individuals.”

Sadly, they’re not being raised and educated as individuals. They’re lemmings who haven’t been taught about the Roman warm period or the mini ice age that preceded the Industrial Revolution. No one has told them that Greenland, now covered in ice, used to be produce crops or that Britons raised grapes and made their own homegrown wine. No one has told them that ancient Aboriginals walked to Tasmania from what is now the mainland before the seas rose and engulfed the land bridge. Consequently, they very well may furrow their brows, even lose sleep, when globalist ideologues gravely warn them of a “climate crisis” that can magically be solved by international wealth-redistribution schemes demanded by the UN.

These poor children are being manipulated by environmental fundamentalists to fulfil the role of ‘useful idiots’, both as pawns in agendas to which they remain oblivious, and literally by their absenteeism from whatever education they might have hoped for were they in class. Our education system is producing  drones who don’t think for themselves and never question the new status quo, but instead aspire to mastering Feminist Dance Theory while uncritically supporting ‘progressive’ agendas.

I forecast there will be lots of soundbites on Friday night of little cuties saying exactly what the mainstream media is already preaching: condemning the sins of a conservative government and sighing their despair for the grim future they’ve been tirelessly assured they will inherit. Their parents will beam with pride as they announce that taking to the streets was entirely their offsprings’ idea, and the echo of their own politics just a coincidence. The ‘progressive’ politicians will cynically insist we should listen to these children who, they’ll assert, are wiser than every last one of the politicians they oppose.

But nothing in the political climate will change. It’ll be just another day of ‘progressives’ demanding economic upheaval at the risk of imminent catastrophe, another day of conservatives being summarily and contemptuously dismissed as loony “deniers” who refuse to accept “the settled science”.

As surely as the earth will keep spinning, the planet’s climate will change, just as it has for millennia — and with as scant regard for the little humans inhabiting it as will the body politic display for the disgrace of an organised campaign to see kids skipping classes.

The Cream of Our Climate Croppers