Scaring kids for a greener world

“…Some of the octopuses in the ocean can’t breathe from gas pollution … I started off my poster design of drawing the octopus first and wanted to make it look as if he was dying. Then I drew dead coral coming and surrounding him like there’s no escape from the acid ocean…”
— entry in a Victorian schools contest for "ocean acidification" art

Brainwashing of Australian children and teens about climate catastrophism is a normal part of the education landscape. But here’s a new twist. Could green lobby groups pay students and enlist teachers with handsome cash awards for spruiking the alarmist credo?

Yes they indeed can, and have.

I was strolling out of the Ian Potter Gallery in Federation Square, Melbourne, on August 15 and noticed a display of student art and essays in the foyer. This was the fruit of a “$50,000 Ocean Acidification Art Challenge” to Year 9-12 Victorian students, organized by the Ocean Ark Alliance. The Alliance is planning to take 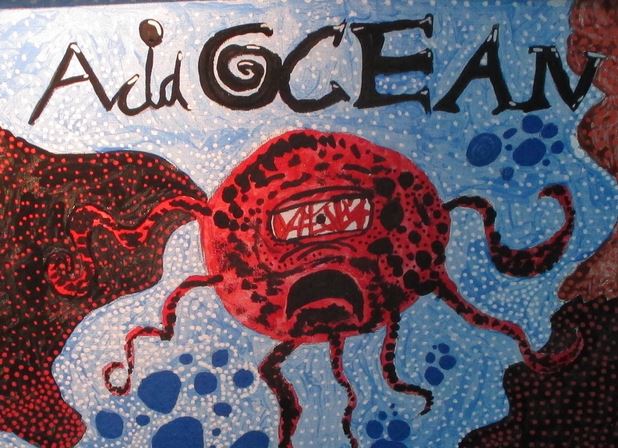 this awards exercise national and international. 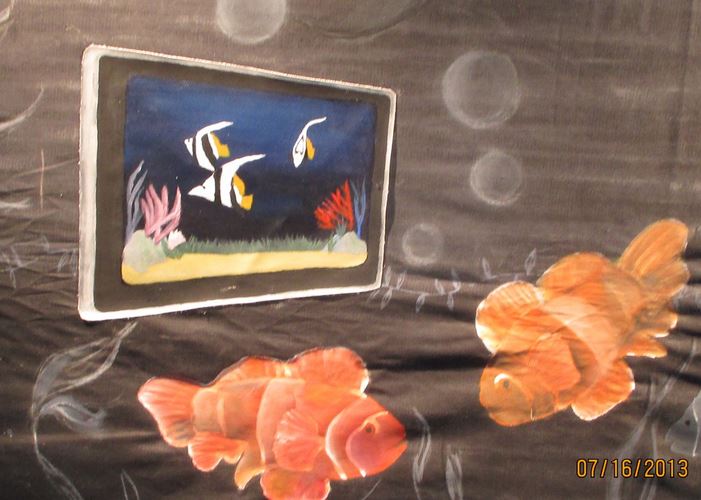 I do not, of course, begrudge the students their prizes for their talented art efforts. My complaints concern their elders, who see nothing wrong in indoctrinating kids with CO2 doomsterism. Student entrants were required to do an artwork on The Impact of Ocean Acidification and pen 100-word essays about their “inspiration”. It’s vicious, however well-meant, to blight kids’ optimism, as The Alliance’s does with its slogan, “Imagine losing all this colour and life”.

The idea that a student should objectively survey the scientific controversies on this topic was unthinkable. Imagine an entry headed: “Probably not much CO2 impact”. The desired apocalyptic tone is captured in these briefing notes from the Alliance:

“The world’s leading marine scientists are warning us that our current rates of carbon emissions are making our oceans more acidic. This is happening so fast that it poses a serious threat to biodiversity and marine life.

“Left unchecked, Ocean Acidification could destroy all our coral reefs by as early as 2050. It also has the potential to disrupt other ocean ecosystems, fisheries, habitats, and even entire oceanic food chains.,,

There are approximately 10,000 Coral Reefs and we are destroying one every other day…Left unchecked Ocean Acidification could trigger a Great Mass Extinction Event…

OK, a lot of scientists believe this and have published learned pieces on it. And a lot of scientists with equally good publication records say it’s bunk. A moderate summary of the two views is in Bob Carter and John Spooner’s new book Taxing Air (p143-145), an; some recent peer-reviewed papers debunking the scare are available at Jo Nova’s blog.

Behind Ocean Ark Alliance as a scientific adviser is Professor Ove Hoegh-Guldberg, Founding Director of the Global Change Institute at Queensland University. The professor has been making dud predictions about a horrid and imminent fate for the Great Barrier Reef since 2000.

In fact, the reef continues to thrive. The extra CO2 may even be good for corals. This area of ocean science is in its infancy. If coral reefs are now being damaged, you can bet it’s not through climate change, but from direct human causes like over-fishing, over-population of atolls, coral mining, and effluent. Students who google “parrot fish + coral” may actually learn something useful.

However, the professor thinks otherwise, declaring on the Alliance site:

“As a marine biologist who has studied coral reefs for more than 20 years, I’ve recently begun to worry that these complex, spectacular global ecosystems may completely disappear within a couple of decades. Unfortunately, my concern is based on hard evidence.”

How well did the brainwashing of impressionable teenagers go? Here are some samples from the kids’ essays on display in Fed Square. Again, I don’t denigrate the kids, only their mentors:

“The coral is dead and a fish is hiding – too scared to go out. The fish has lost all of his friends and possibly his soul mate. He has no food and no protective shelter from what will eventually bring his life to an end…”

“The painting shows the family of fish, with (fish) parents telling their offspring about how rich and colorful their life and environment once was. Now it has only been ‘saved’ and possible to see on the high technology gadgets such as iPad..”

“A quarter of our precious marine species are now left without a habitat. We are losing our exquisite coral reefs and marine life and this picture is all I will have left.”

“I painted the sea turning into oil, the production of which is one of the main causes of carbon dioxide emissions in our world. The black mist in the background of my painting is a representation of smoke and the burning of fossil fuels.”

“Barrier Grief: If Ocean Acidification is left unaddressed, by the year 2050, it could completely destroy the ocean food chains and coral reefs…Future generations will have to rely on documentation…in a museum to teach them what marine life and ecologies were like prior to the damage.”

What is this Ocean Ark Alliance all about? It’s an international not-for-profit and there are plenty of well-credentialed ocean scientists involved. Equally, it is populated with film-makers, media specialists and “community” (read green-tinged) groups. The Alliance recently allied with MESA (Marine Education Society of Australasia), which wants this lop-sided science “education” exercise embedded in schools’ 2014 curriculum.

The $50,000 prize money this year was from Alliance co-founder Peter Hannan, a passionate, Melbourne-born underwater photographer with the sincere but loony belief that “soon” the beauty of underwater life may exist merely on film. Meanwhile he was whooping it up in Las Vegas on New Years Eve, en route to Iceland, enjoying huge fireworks displays while downing a few Margaritas to soothe his excitement.

Some might consider that shrinking the carbon footprint of his global jet-setting would be a worthwhile sacrifice for the cause.

I wouldn’t take such cheap shots, except that, for a Green group, the Alliance mixes in fast company. One Alliance “partner” is mega-million luxury yacht maker Sea King Freedom, “the birthplace of the greatest super yachts in the world”. A 90-metre, 2600-tonne yacht it is advertising has five decks, a helicopter, 280,000 litres of fuel to power 4600 horsepower engines, and, of course, babes in bikinis.

Mel Brooks in History of the World had the immortal albeit saucy line, “It’s good to be the king.”

Another Alliance partner is Unboxed Media, a Sydney production company currently working on – can you guess it? — The Tipping Points Crisis, which is ‘a major international TV series on Climate Change’. Unboxed Media? Should it be Unhinged Media? It uses ‘captivating characters that support our understanding of our changing climate system’.

Broadly, the Alliance seems to be a media group catering to elites who enjoy classy underwater art photos. The feel-good “I care” element is premised on ocean conservation. Commercially, the business would fall apart if the “acidification” scare were to be debunked. Hence money spent “educating” the younger generation at school is a good investment.

All involved are undoubtedly and rabidly sincere. I’m sure they believe the “facts” on their “Fact Sheet” for students, such as 500 million people about to lose their “daily food and income” as coral reefs turn turtle. Although the fact sheet ends rather lamely: “Our polar seas are already so acidic" — sorry, guys, they’re still alkaline — "that they are starting to dissolve some shells.”

Tony Thomas would like kids to have a carefree childhood, they’ll meet quite enough ugly stuff later on, like he did. He blogs at tthomas061.wordpress.com, and recently wrote on the brainwashing of English-learning migrants

The ‘Fine’ Paper That Had To Be Pulled