Alarming climate  and eco-activist messages are saturating the British school system, according to a report by noted UK bloggers Andrew Montford and John Shade. On the same  day of the report’s publication, April 8, the response of UK Secretary of State for Education Michael Gove was to warn   teachers they are breaking the law if they fail to provide balanced coverage of climate change and similar issues.

The affair suggests a similar independent inquiry into “climate teaching” in Australian schools would be worthwhile. Anecdotal accounts of brainwashing by activists masquerading as teachers in our primary and secondary schools are legion.

Montford runs the Bishop Hill climate blog and authored the earlier forensic study, The Hockey Stick Illusion. Shade is a retired statistician and physicist who focuses on climate indoctrination in schools worldwide. The report was sponsored by The Global Warming Policy Foundation.

Gove’s spokesman said,  “The Secretary of State read this report with concern. Ministers are clear that the new national curriculum must equip young people with the core knowledge they need to understand the weather, climate, the earth’s atmosphere, physical geography and the interaction between nature and the environment.

“That means in both science and geography, pupils must learn the facts and processes which underpin public discussion of climate change. They must be equipped with the scientific knowledge to make their own judgments about political responses. They must not be directed towards a particular campaigning agenda.

“Schools should not teach that a particular political or ideological point of view is right – indeed it is against the law for them to do so. Great care should be exercised to make sure information provided to students is scientifically rigorous. It is important that any material used in the classroom is rooted in science, not driven by the aims of a campaign.”

The UK conservative government is beginning to push back against activist indoctrination in the curriculum, legitimized by the Labour government in 2005-07. Last year it put out a draft revision of the National Curriculum for discussion, with less climate activism, but retreated under activist attack.

The new report says that children are being treated as political targets by activists who wish to change society in fundamental ways: “This is unacceptable whether or not they are successful.”

Among the report’s findings:

The Montford-Shade report says, “We find instances of eco-activism being given a free rein within schools and at the events schools encourage their pupils to attend. In every case of concern, the slant is on scares, on raising fears, followed by the promotion of detailed guidance on how pupils should live, as well as on what they should think.

“In some instances, we find encouragement to create ‘little political activists’ in schools by creating a burden of responsibility for action on their part to ‘save the planet’, not least by putting pressure on their parents.” 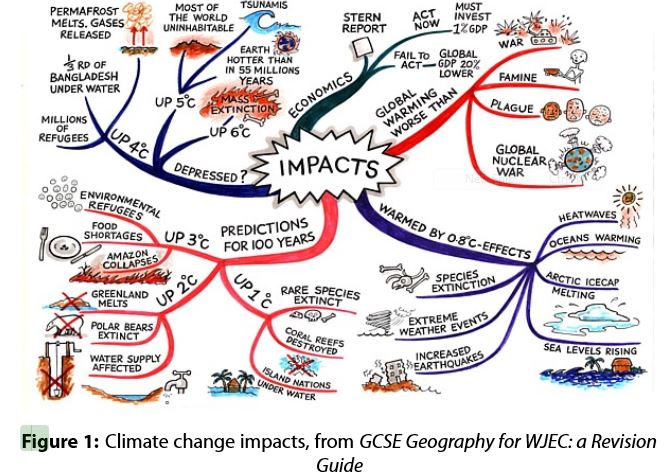 The authors did find an example of a responsible and balanced text on climate in a textbook. “For example it introduces a section on managing the causes of global warming and climate change by noting ‘if we believe that today’s global warming is simply part of natural climate change, then there is nothing we can do to stop it. All we can do is to adapt to the consequences…However, if we believe that the increase in greenhouse gases is the main cause of global warming, then we can certainly do something’. Thus in a few words, two ends of a range of views are presented, along with some simple inferences to help frame the following section on international cooperation to reduce greenhouse gas emissions.”

The norm, however, is to ignore all findings that are off-message, or mention them in order to nullify them. An example:  “All scientists care about is evidence…All these graphs can be mighty confusing, especially when people manipulate the data to try to show that climate change isn’t happening.”

In religious studies papers, students were asked for “two reasons why many religious believers are concerned about climate change. (4 marks) … (d) Explain actions religious people might take to look after the planet. (3 marks)”. Marks were to be awarded for students noting “The effects of climate change on life, e.g. loss of life, food shortages, devastation of livelihoods because of severe weather, droughts, floods, famine, destruction of crops, effects on plants and animals/long term effects/religious reasons – stewardship, dominion, responsibility, etc.”

Marks were also to be awarded for students who saw the need to “protest when necessary/ join action groups such as Greenpeace and religious organisations which raise awareness/encourage others to protect the planet, etc.”

One teacher posted this query on a teachers’ forum: “I’ve got [a job] interview coming up in which I have to teach English to a mixed Year 7 group on the theme of Environment and Sustainability. Any ideas folks?”

An Environmental Science paper awarded marks for students making the incorrect statement that fossil fuels are running out.  Recycling is depicted in textbooks as always a positive thing to do, even if uneconomic or wasteful. Biofuels are advocated and costs ignored in terms of driving up food prices in poor countries. Scotland’s  climate-change education promotes  fiction films such as The Day Before Tomorrow (about a climate apocalypse) and The Age of Stupid (a man sits in a climate-devastated world in 2055, bemoaning his predecessors’ lack of care).

The saturation of students with green messaging  could well be counter-productive to the activists, the report says.  Teacher feedback found online at the Times Higher Education site included

The climate  emphasis could have been a springboard for enhancing scientific thinking. However, having unqualified primary school teachers explain complex physical phenomena to small children has not been a successful strategy and children’s understandings remain poor, the report says.

Children are also becoming fearful of the future. US and UK surveys have found primary school children pessimistic – sometimes losing sleep – about their future because of global warming. A sub-teen group was twice as worried about the climate, as about going on dates.

The report’s authors recommend that concerned parents review the curricula, texts and visiting speakers (such as from World Wildlife Fund, and complain politely about bias and pessimism, and any  prejudice against growth and technology. Parents should urge schools to encourage children’s inquiring minds, it continues, rather than succumb to appeals to authority.

They say, “The seriousness of what we have seen is hard to overstate. The fact that children’s ability to pass their exams – and hence their future life prospects – appears to depend on being able to demonstrate their climate-change orthodoxy, is painfully reminiscent of life in communist-era Eastern Europe or Mao’s China.

“Politicians seem to have given the nod to this process, effectively handing much of the curriculum to green activists. The question of whether what is taught in the classroom is scientific or political, balanced or biased, true or false seems to have gone unexamined…

“The piecemeal information and examples we have reported on here seem to us sufficient grounds for concern that children remain at risk of being targeted by zealous campaigners, and of being frightened into premature personal and political actions. They are also at risk of being deprived of a more meaningful education appropriate for the 21st century – an education that would equip them to question and evaluate all claims, not least those of fear-mongering campaigners.

“But only a systematic evaluation can truly determine the extent of the indoctrination as well as the emotional and educational harm to pupils that is undoubtedly resulting.” #

The Abused Science of Climate Change