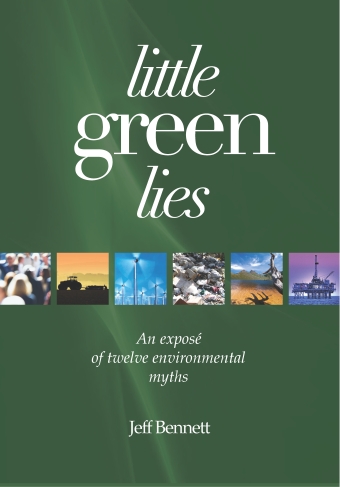 The natural environment matters a lot to many people. Their views on issues such as recycling, population control, economic growth and renewable energy are often held strongly and emotionally. But some of these views are best described as ‘little green lies’.

Sometimes people bend the truth because they believe they are protecting others from the harm caused by environmental decay. Others do it for personal gain. But unlike ‘little white lies’, telling ‘little green lies’ is not harmless. If they become so widely accepted that they form the basis of government policies, our society can be worse off for them.

They can even end up causing environmental damage.

“This tremendously valuable book faces a huge task in attempting to help recent generations of school students to become better informed about the “little green lies” that they have been told. As the book shows clearly, the economic logic behind many environmental issues is complex and simple approaches such as the “little green lies” serve no one well.”

“At last, the intellectual firepower to cut through the “little green lies” told by environmentalists. Professor Bennett turns his mind to twelve key propositions at the core of green ideology, and demolishes them all. This book must be on the bookshelf of every person concerned for a better environment and a better society.”

“If you are an environment zealot whose views are not swayed by reason and evidence, this book is not for you. However, if you truly want to improve the environment, this book will sharpen the way you think about policy and add to your arsenal of tools for making our natural world a better place for humans and their fellow travellers on the planet.”

There are twelve propositions addressed in the twelve chapters of this book.

2: Renewable energy production should be stimulated.

3: Consumption choices need to be informed by products’ ‘food

4: World population should be capped.

5: Economic growth and trade are bad for the environment.

6: No waste should go to landfill.

7:Water and energy should be used ‘efficiently’, whatever it costs.

8: The environment is of infinite value and must not be harmed.

10: The care of the environment cannot be entrusted to the private sector.

11: Agriculture and mining are always in conflict with the environment.

12: Decisions regarding the future of the environment should be made using the ‘precautionary principle’.

Why Climate Change Doesn’t Scare Me