Not since singer Ethel Waters started a Heat Wave by letting her seat wave – and the Intergovernmental Panel on Climate Change chair lost his last month – has there been such a kerfuffle.  Forget dangerous anthropogenic climate change and global warming. The new scourge in the gender-weather space is rampant sexism.

Whether Dr Rajendra Pachauri ever visited Reno, Nevada’s ‘biggest little city in the world’ is unknown. But if the heavy-breathing author of  toe-curling saga Return to Almora actually did so, there is a 97% probability (as reckoned by climate science’s methods) he visited Desert Research Institute and met Nyssa Perryman (now at Truckee Meadows Community College) and Sandra Theiss. He would have found the encounter enlightening, for they are the joint authors of the paper, ‘“Weather Girls’ on the Big Screen: Stereotypes, Sex Appeal, and Science’, published last year in the American Meteorological Society Bulletin.

Ms Perryman and Theiss argue that a weather girl ‘beauty-over-brains’ stereotype impedes the ‘public response to dangerous weather situations’. Female weathercasters apparently are still not taken seriously. Victims of ‘nothing-more than–a-weather-girl’ prejudice, they are treated as mere eye-candy unable to distinguish a front from a trough – or an isobar from Coyote Ugly.

In Cloudy with a Chance of Meatballs, Sam Sparks – the female broadcast meteorologist – has many ‘moments of excited scientific jargon followed by a moment of pause, a girly laugh or trite airheaded phrase typical of a weather girl.’ Just a ‘nerdy’ kid who only wanted a Doppler radar, she is forced to adopt a ditzy persona to make it.

Weather-girl sexism – like the Coelacanth — clearly has resisted decades of social engineering and affirmative action. But perhaps this indicates – contrary to feminist theory – evolution in action. For without eye-candy, presumably there would be a rapid cooling of the relational climate and lower reproduction rates, at least in the developed world?

There is a glimmer of hope. Recent research on the reptilian brain appears to have identified the gene driving most sexist-syndrome formation. So micro-surgery – combined with a high dosage of anti-libidinal medication post-op could be a game-changer here. Watch this space. 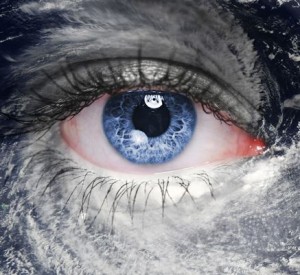 Another storm in the gender tea-cup is also wreaking havoc. It began in mid-2014, when this paper – “Female Hurricanes Are Deadlier Than Male Hurricanes” – appeared here in the Proceedings of the National Academy of Science. Sharon Shavitt, Walter H. Stellner Professor of Marketing at the University of Illinois, and her three co-authors, claim that an ‘unexplored social factor’ – namely ‘gender-based expectations’ – has a measurable ‘influence on the human toll of hurricanes that are assigned gendered names’.

“Feminine-named hurricanes (vs. masculine-named hurricanes) cause significantly more deaths, apparently because they lead to lower perceived risk and consequently less preparedness. Using names such as Eloise or Charlie for referencing hurricanes….taps into well-developed and widely held gender stereotypes, with potentially deadly consequences.

“This finding indicates an unfortunate and unintended consequence of the gendered naming of hurricanes, with important implications for policymakers, media practitioners, and the general public concerning hurricane communication and preparedness.”

Analysing US hurricane death-rate data and the results of ‘laboratory experiments’ with University of Illinois students, they concluded that hurricane names constellated ‘gender-based expectations about severity’ and reduced ‘respondent preparedness to take protective action’.

Threatened populations apparently did not take female-named hurricanes seriously during the past six decades. They did not take the precautions they would have done with a male-named storm. Survival-decisions were influenced less by government and Weather Channel warnings and more by (i) whether the approaching  storm-system was called Amazon or Alf, Hillary or Hank, Julia or John, Germaine or Guy, et cetera; and by (ii) a name’s degree of femininity, as determined by the authors.

The paper went viral. Gender scholars love it, as do folk who see not only ‘climate change’ but sexism everywhere.

Faye Flam at KSJ Tracker described it as the “extraordinary claim of the week”. Psychologist Dr Jane Hu headlined it in her June 17 Slate critique, Falling for Familiar Narratives, during ‘a week of spectacularly bad social science reporting’. “People of the Internet were quick to cite the findings as an example of sexism. Ironically, most of the headlines reporting the story played to the same stereotypes that are supposedly behind the hurricane deaths. “No fury like a woman storm,” reported New Statesman. CNN, for whatever reason, chose to infantilize the storms, calling them “girl hurricanes.”

More skeptical journalists, scientists, and bloggers were quick to point out glaring flaws in the study. Some dissected the study’s methods, Slate re-ran analyses, and others drew up their own models. People dug deep, and the verdict was clear: The study’s data analyses may not have been accurate, and its conclusions were overblown.”

“It is painful to see junk science — and make no mistake — this is junk with a dose of scientism added. The lack of rigor is appalling. Even more appalling is to think that this got past a set of peer reviewers. The sampling procedure for the six studies is pure junk. The appropriate sampling pool would be persons living in hurricane corridors. But getting that sample would require hard work. The authors instead used convenience samples that are worthless. Taking the easy way out on the sampling sends a clear signal that the authors are interested in the appearance of rigor, but not the application of rigor. As for the subjective “feminine-sounding” names classification scheme, it is simply not credible.” (June 3, 2014)

On June 17, 2014, Professor Shavitt responded with this post (my emphasis).

“We are of course aware that all hurricanes had female names from 1953 through 1978. In 1979, they began alternating the gender of the names. However, our analysis primarily focused on the femininity-masculinity of names, not only on male/female as a binary category. Even during the female-only years, the names differed in degree of femininity (compare two female names: Fern, which is less feminine to Camille, a rather feminine name; or Ione compared to the more-feminine Diane). When we model the fatalities of all hurricanes since 1950 using their names’ degree of femininity, the interaction between name-femininity and damage is statistically significant. That is a key result. Specifically, for storms that did a lot of damage, the femininity of their names significantly predicted their death toll.

We cannot claim (nor did we claim) that gendered naming is more important than other factors. Other factors certainly matter, as well. But that doesn’t mean we should ignore the apparent impact of the femininity of the names. Meteorologists and hazard communication specialists have called for more attention to social science factors that predict how people respond to hazard warnings. Implicit biases represent an understudied factor that makes a difference.”

Will there be a new study to explore whether there is an inverse effect?  For if hurricane names can have such profound – and deadly – consequences, perhaps women who share their names with powerful storms – such as Sandy and Katrina – are now being shown more respect post-event.

Feminism’s first wave forced the naming gender-change in 1978. But whether Shavitt et al are right or wrong, the issue today surely should be not whether weather girls do or don’t, but when agencies will opt for a gender-neutral alphanumeric scheme, similar to that used in astronomy or virology.

There is a local connection here. It was Clement Wragge, a colourful Australian meteorologist, who in 1894 began the convention of naming hurricanes, cyclones and typhoons. According to journalist Ian Townsend, Wragge started with the Greek alphabet (alpha, beta, gamma, et cetera) and switched to South Sea island female names (Mahina, Eline etc) several years later.

It was a time of almost as much scepticism about weather forecasting as there should be today about ‘forecasting’ or ‘projecting’ future climate states.

Wragge, incidentally, began a public campaign of retribution in 1902, naming storms after Australian politicians who had upset him. His main target was forecast ‘denier’, Alfred Conroy, member for the NSW seat of Werriwa, mentioned in this extract from a speech by a Mr Winter-Cooke (Victoria) in the House of Representatives:

“Mr Wragge may prophesy correctly sometimes, but he is often incorrect. Only this week there was a cyclonic disturbance named ‘Conroy’ to come along, but it has never reached us except in this House. (Laughter.) Mr. Conroy— Men are always frauds when they try to foretell what is to come. (Laughter.) I don’t believe in these Hottentot rain gods. Mr. Wragge prophesies a storm with rain. The storm passes without rain, but by-and-by another comes along with rain, and Mr. Wragge says, ”Ah, here is my storm!’ That very thing happened last week. Could a scientific man have made such a blunder? Let him publish his prophecies, and let the public believe them if it pleases, but don’t let it be done at the federal expense.” — The Adelaide Register, August 23, 1902.

“Will you tell me this, Mr Wragge,’” asked a pressman of the famous scientist, “for what space of time in advance can forecasts be really made?”

“For New Zealand, a fortnight ahead,” was the answer, “and now I can see my way to forecast the seasons in the whole of Australia.”

“The ‘disturbance Braddon’ caused some amusement (and damage) in Tasmania not long ago. Now, what did that exactly mean?

“I gave the names of politicians to storms,” replied Wragge. “One of these I named ‘Braddon,’ after Sir Edward Braddon, and by this very storm one of his windows was blown in! That storm started from Cape Leeuwin, passed over the whole of Tasmania, and went on to New Zealand. I had it under observation for eleven days.”

“What other politicians did you honor in this way? ‘Some have greatness thrust upon them’.

“Well I called a storm Conroy. He called me, in the House, ‘the Hottentot Rain God.’ It’s in ‘Hansard.’”

“Was it after he had defied you that you made him a storm king?”

“No, he first called me the ‘Hottentot Rain God,’ and then I gave his name to a storm.”

The Bureau of Meteorology today does not encourage public requests for tropical cyclone names, possibly due to the Wragge episode. So if applying, be prepared for a long wait.

Due to popular demand some letters in the supplementary list have at least two names listed for a particular gender. The following will therefore be CLOSED to new requests until further notice:

Note that it can take many decades for a suitable slot to become available, then a further 10-20 years for the names to cycle through, so it is likely to be well over 50 years before your requested name is allocated to a cyclone.