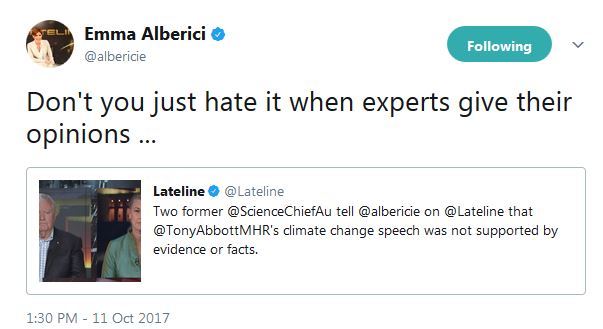 Taking a break from tweeting energetically in support of gay marriage, Lateline compere Emma Alberici has provided a pithy explanation for her show’s cancellation. The stated reasons are that it has passed its use-by date and can no longer pull a worthwhile audience — a grim fact diplomatically expressed by ABC in-house apologist Gaven Morris as a consequence of “changing viewer habits”.

Actually, viewer habits haven’t changed at all. Boring, predictable, laughably biased fare has never been a marquee attraction and it doesn’t get any more predictable, laughable or biased than Lateline. Take the show’s assault on Tony Abbott’s most recent thoughts on climate change, which prompted Ms Alberici’s tweet reproduced above.

Know that Lateline had two seats available for guests to discuss Abbott’s address. So how did the bookers fill them? By recruiting two former chief scientists — Ian Chubb and Penny Sackert, each an ardent warmist — to opine at some length that the former PM is a dill. Why not host just a single former chief scientist and bring in a sceptic, Ian Plimer for instance? That might have made for some genuine excitement, the sort of thrust-and-parry conversation to stop viewers reaching for their channel-changers.

But this is the ABC we’re talking about, so no chance of that. Instead, as Alberici’s smug little tweet indicates, it was only the catastropharian narrative the ABC favours that received an airing. “Experts”, you see. And such experts!

Expert Sackett, an astronomer by training, expertly predicted in 2009 that the planet had only half a decade to get Gaia’s house in order, telling the ABC

we have about five years to avoid the dangerous climate change that would be generated if average global temperatures increase by more than 2°C above pre-industrial levels.

That expert prediction was uttered in 2009 and yet here we are, three years past Ms Sackett’s deadline and with the planet still rolling right along. A compere keen to retain and build an audience might have put it to her guest that perhaps, just maybe, dud prognostications of that sort do little to establish credibility. But Ms Alberici uttered not a peep, allowing her guest free rein to peddle even more absolute nonsense, all of it unchallenged (of course), and with a double-pike twist of self-contradiction tossed in for good measure. Here’s what Ms Sackett told Lateline (emphasis added):

EMMA ALBERICI: Penny Sackett, what Tony Abbott says is more people die in cold snaps than in heatwaves. So to the extent that the temperature is rising, it’s a good thing.

PENNY SACKETT: Well, I’m afraid that is just not supported in general by the facts … in Australia what we know is that currently it probably is true that more people in the past have died because of cold weather

So something “not supported” by “the facts” is probably “true”. Climate science, settled or not, is a genuinely wondrous thing. But Ms Sackett was only warming up, so to speak (emphasis added).

… we also know that in the last decade the number of heat deaths has gone up by a factor of 23 over the decade previous.

A “factor of 23”, this expert says. Translated, what Ms Sackett would have you believe is that global warming is killing Australians at 23 times the rate they were expiring before the expert establishment discovered that climate change is a bonza grant magnet and career enhancer. So where did Ms Alberici’s expert guest find that shocking, we-must-act-now factoid? Most likely here, in a Climate Commission paper by the three mush-keteers of climate science, professors David Karoly, Matthew England and Will Steffen (follow the links for more on their prognosticative achievements).

So, if that is indeed the source of Ms Sackett’s claim, her “factor of 23” is a misquotation and an exaggeration by, as she might put it, a factor of 92.

OK, everyone makes mistakes, but is Ms Sackett’s assertion that Australia is witnessing a hike in heat-related deaths even remotely accurate? Not according to a 2014 paper by five number-crunchers from Macquarie University who analysed heatwave mortality from 1844 to 2010 and concluded (emphasis added)

Both deaths and death rates (per unit of population) fluctuate widely but show an overall decrease with time.

Interestingly, the Karoly, England and Steffen paper notes that, when we do see an eruption of heat-related deaths, it is the elderly and poor who suffer most. Given that the latest thrust of Turnbullian climate policy is to ask that air conditioners be switched off during heat waves — free movie tickets if you do! — it is now official policy to encourage more suffering, and presumably more deaths, to protect the windmill-plagued electricity grid’s stability. Perhaps Alberici was thinking of her next tweet and thereby missed the opportunity to ask her guest if she sees anything bizarre in forcing up the cost of power to safeguard the planet from the ravages of climate change while simultaneously putting the lives of pensioners and babies at greater risk from that same climate change.

Lateline‘s second climate expert, the neurologist Ian Chubb, appears also apt to quote grossly inaccurate numbers. In his case it was his citing of the artfully crafted furphy that 97% of climate scientists believe wholeheartedly in anthropogenic climate change.

Yes, despite that claim having been systematically demolished, not just once but again and again, Lateline‘s Expert #2 is still parroting it. And Ms Alberici let it slide into the conversation without qualification or comment.

Ms Alberici’s next gig at the ABC will see her re-cast as the national broadcast’s chief economics correspondent, which is a bit of a worry. Economics, like alleged climate science, involves lots of numbers and more of those experts before whom she genuflects.

Roger Franklin, the editor of Quadrant Online, and has just paid a $940 quarterly electricity bill — the cost of saving the planet, experts say.

Al and Clive’s $alvation $how

And the good news is…