How to Impress Fools and Make a Fortune 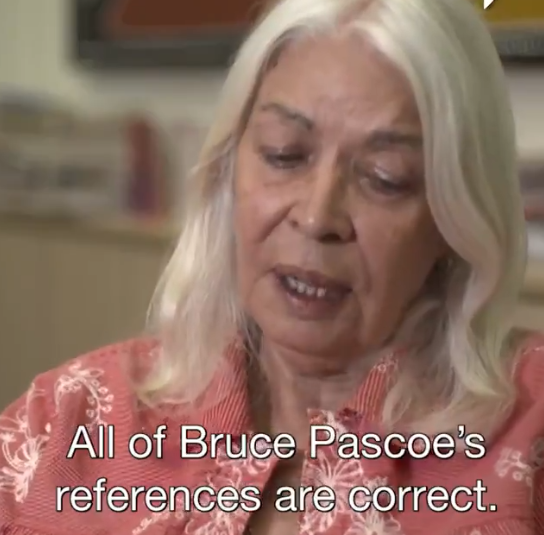 Teflon historian Bruce Pascoe marches on undaunted and untouched by the volumes of incontrovertible evidence that he is neither Aboriginal nor any kind of historian. Here he is in the New Daily in an article picked up from the New York Times and headlined ‘Bruce Pascoe wants to save the present with the Indigenous past’:

Bruce Pascoe stood near the ancient crops he has written about for years and discussed the day’s plans with a handful of workers.

The farm he owns at Gypsy Point, on a remote hillside near Mallacoota, a day’s drive from either Sydney and Melbourne, aims to correct for colonisation – to ensure that a boom in native foods, caused in part by his book, Dark Emu, does not become yet another example of dispossession.

The lessons Pascoe, 72, seeks to impart by bringing his own essays to life – and to dinner tables – go beyond appropriation. He has argued that the Indigenous past should be a guidebook for the future, and the popularity of his work in recent years points to a hunger for the alternative he describes: a civilisation where the land and sea are kept healthy through cooperation, where resources are shared with neighbors, where kindness even extends to those who seek to conquer.

“What happened in Australia was a real high point in human development,” he said. “We need to go back there.” Writing about it, he added, can only do so much.

Well here, in a polished demonstration of verbal gymnastics, we have victimhood and triumphalism neatly juxtaposed.

Certainly, Pascoe has championed native plants, such as murnong and native grasses, but I would be surprised if they are regarded as anything other than boutique crops and hardly of interest to agricultural corporations.  Is Monsanto hovering in the background with an evil glint in its corporate eye?  There would appear to be no bar to Aborigines participating in this alleged bonanza other than a lack of interest.  And good luck to them if they do – this is the kind of enterprise in which there is a low bar to entry.

If Pascoe is to be believed, the major requirement is land, of which Aborigines increasingly have plenty.   Fertilizers and sophisticated irrigation, for example,  should not be required as they were certainly not available to those ingenious Aboriginal agriculturalists of yesteryear.  In fact, Pascoe’s agricultural fantasy is just a rehash of utopian wishful thinking that has been around greenish circles for years.  He’s just tried to impose a ATSI trademark on it.

But it is the idea that Aboriginal culture “was a real high point in human development”, that rivals his other bold claims – Aborigines invented democracy and were the first bakers being just two of his assertions – for sheer chutzpah.   What he is saying is that, at some point, pre-historic Aborigines realised they had achieved nirvana and called a halt to further development. Meanwhile, the rest of us charged mindlessly ahead and screwed up everything. You would need to be as gullible as a NYT reporter or Australian education bureaucrat to swallow that one.

Critics, including Andrew Bolt, a conservative commentator for News Corp, have accused Pascoe of seeking attention and wealth by falsely claiming to be Aboriginal while peddling what they call an “anti-Western fantasy.”

Asked by email why he’s focused on Pascoe in around a dozen newspaper columns since November, Bolt replied: “Have fun talking to white man and congratulating yourself on being so broad-minded as to believe him black.”

Pascoe said “Bolty” is obsessed with him and struggles with nuance. He’s offered to buy him a beer, discuss it at the pub and thank him: Dark Emu sales have doubled since Bolt’s campaign against Pascoe intensified.

I’m not sure why Bolt had to be asked why he has taken a long, hard and critical look at Pascoe, since the columnist has made it perfectly clear that his concern is that Pascoe is peddling a demonstrably false history.  But Pascoe cheerleaders such as, the NYT‘s  Damien Cave, the author the article, have felt free to overlook this inconvenient truth and concentrate instead on the question of Pascoe’s aboriginality, as if that were the determining factor in whether or not he and his confected “history” are to be taken seriously.

Cave’s reporting of Bolt’s putative reply smacks of the same context-eliminating technique at which Pascoe himself excels.

The claim, if true, that Pascoe’s sales have doubled since Bolt turned the spotlight him, tells us a lot more about the credulity and intellect of the useful idiots of the Left who buy a book because someone recommends against it, than it does about Pascoe’s critics.