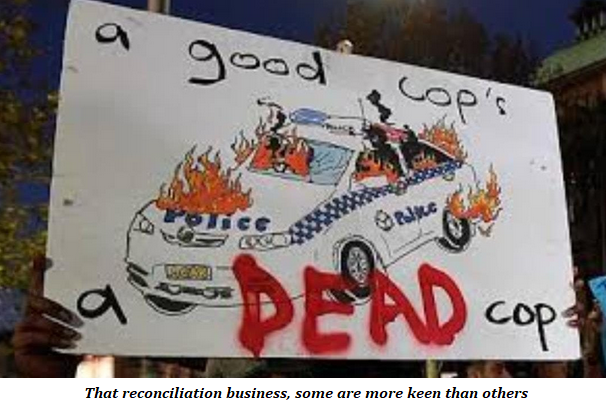 As someone who has spent a number of years working in an Aboriginal community in outback NSW, the well-being of Aboriginal peoples is of great importance to me. What’s more, I am currently a member of a denominational working group seeking to explore how the Presbyterian Church of Australia might be able to better serve indigenous Australians. And for full disclosure, I am also a descendant of South Sea Islanders.

Recently, the ABC reported Labor’s spokeswoman for Indigenous Australians, Linda Burney, as stating that Aboriginal deaths in custody are now a ‘national emergency’. According to Burney, this is because “…the Royal Commission [into Black Deaths in Custody] had not been implemented, and part of it was due to systemic racism, and part of it was about not the appropriate medical attention being provided to Aboriginal prisoners.” 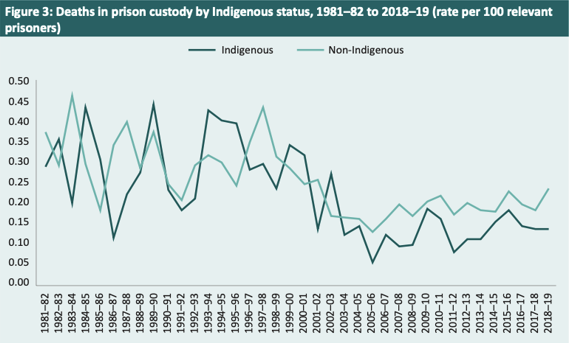 Dr. Anthony Dillon, an Aboriginal postdoctoral fellow at The Australian Catholic University, has observed that April marks the 30th anniversary of the final report of the Royal Commission into Aboriginal Deaths in Custody. (By the way, “in custody” is an extremely broad term covering everything from deaths during an arrest, police pursuit, pre-trial remands, or while in prison or detention). Significantly, Dillon states:

It has been known since the early days of the royal commission, that Aboriginal people in custody do not die at a higher rate than non-Aboriginal Australians.

Indeed, in a sign of just how politicised the topic has always been, Dillon refers to an article in The Canberra Times, in which David Biles, a criminologist, who for three years was the head of the criminology research group of the Royal Commission into Aboriginal Deaths in Custody, stated:

What’s more, Dillon goes on to argue that the situation has remained unchanged in the years since the commission handed down its findings:

Despite this truth, some see Aboriginal deaths in custody as a crisis, with some claiming it is clear evidence of racism. While masquerading as a crisis, I think it’s actually a distraction from discussing the elevated death rates of Aboriginal people in communities. I would welcome some truth-telling on that.

To be clear, it is non-Aboriginal people who are dying at a higher rate than Aboriginal people, both now, as well as over the past thirty years. So, if there’s a ‘national emergency’ involving deaths in custody then surely this involves people of all racial backgrounds and not just those who are indigenous.

Significantly, the vast majority of Aboriginal deaths in custody are experienced by those with pre-existing health conditions, rather than anything to do with police violence or ‘systemic racism’. As Dillon writes in the Sydney Morning Herald:

Let’s set the record straight. Yes, any death in custody is sad, but the reality is people die. Whether they are in custody or not, Aboriginal or not, people die. The Australian Institute of Criminology, reporting in 2019 on the first 25 years since the royal commission, found the majority of prison deaths for Aboriginal prisoners were due to natural causes.

Note the following graph found on page 57 of the official government report, in particular that over the past forty years only two Aboriginal people have been shot and killed by a police officer. In the same period, nearly a hundred-Aboriginal inmates took their own lives by hanging.

None of this should minimise the tragedy of anyone dying while in police custody. However, perpetuating the false narrative that Aboriginal people are at an increased risk of harm than non-Aboriginals only puts more Aboriginal lives in greater danger. As Dillon writes in a subsequent article for news.com:

We pay a dear price when Aboriginal people in custody are portrayed as being at an increased risk of dying. When Aboriginal people are endlessly bombarded with the poisonous message that frontline workers are racist, then don’t be surprised if they are reluctant to access their services when needed.

For example, in The Australian newspaper this past March, Rachael Marin, the principal solicitor at Wirringa Baiya Aboriginal Women’s Legal Centre, was reported to have said that due to the four Aboriginal deaths in custody in March, these statistics were stopping Aboriginal women reporting their abusers. Ms Marin is quoted in The Australian as saying: “The fear is that once they’re in that system that there will be poor mistreatment, and that there will be possibly a death in custody.”

Sadly, Dillon is right. Aboriginal women are at a much greater risk of domestic and family violence than non-Aboriginal women. As Hannah McGlade, an indigenous academic at Curtin University, writes in The Australian:

In the Northern Territory, the rate of hospitalisation is up to 86 times higher for Aboriginal women.

In Central Australia, this figure is 95 times more likely for Aboriginal women.

The deaths of Aboriginal women from such ­violence comprise the most frequent form of homicide in Australia today.

This is the harsh and painful reality facing Australia today. However, rather than the police or courts being systemically racist, a more pertinent question needs to be addressed: why are Aboriginal men committing crimes leading to their incarceration? The answers are multi-faceted: a breakdown in the nuclear family, widespread drug and substance abuse and, I believe the dissolution of the Christian church in indigenous communities. It was early Church father Jerome who said, “If an offense come out of the truth, better is it that the offense come than that the truth be concealed.” That statement seems especially apt when it comes to speaking truthfully in regard to the highly emotive subject of Aboriginal deaths in custody. As Dillon himself concludes:

Finally, something from the Royal Commission into Aboriginal Deaths in Custody report rarely mentioned, is: “There is no other way. Only the Aboriginal people can, in the final analysis, assure their own future.” That does not mean Aboriginal people go it alone, as Aboriginal affairs is everyone’s business, but they must play a crucial part. Let’s work together. Honest reporting on Aboriginal deaths in custody would be a good start.

Yes, honest reporting would be a blessing. The curse is that we see so little of it.

How to Impress Fools and Make a Fortune

When the horrific is mundane — Part IV