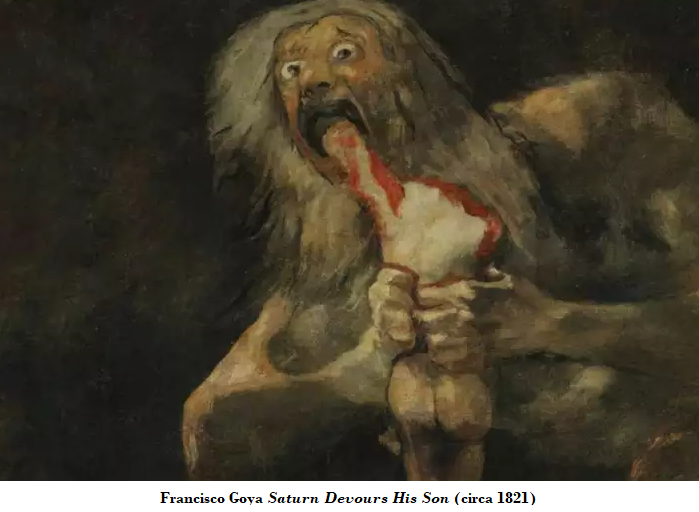 Saturn ascends. Modern astrologers contend that Saturn governs the maturation of young people (formerly: “children”) into full adulthood, a process that now takes approximately 29.5 years. Saturn is a lethargic old codger (it’s still acceptable to insult the elderly), with the longest astrological cycle of any visible planetary body. Of course, it has always taken 29.5 years for Saturn to make the full circuit through all the signs of the zodiac, but only recently has adolescence been extended to just shy of thirty. Back in Saturn’s day, “thirtysomething” was another word for “grandparent”.

Whereas the return of Saturn with his crooked scythe might once have been feared as a harbinger of impending doom, it is now supposed to presage nothing worse than a kind of early-life identity crisis. It means that the time for youthful dithering (ahem: experimentation) is over. It’s time to choose. Straight or gay? Labor or Greens? City or suburbs? Children or happiness?

The planet Saturn isn’t just important to astrology; by some accounts, it is astrology. When Dante identified the seven liberal arts with the seven visible planets, he paired astrology with Saturn (the seventh heaven) because “above all the other planets, it is the highest” just as astrology is the highest of the sciences. He cited no less than Aristotle and Ptolemy as authorities. That said, portentous though it might be, the return of Saturn to the same relative position it occupied in the heavens when a person was born isn’t a particularly personal star sign. After all, everyone born in fiscal year 1991 is experiencing the return of Saturn in calendar year 2020.

Unless you agree with Augustine that even identical twins are born under different stars, since (as was already understood in antiquity, before it was forgotten) the motions of the heavens are almost inconceivably fast, entire birth cohorts share pretty much the same horoscopes. Thus the Millennial generation (born 1981 to 1996) is now completing its collective transit of Saturn, with two-thirds of them past the critical phase and one-third on the cusp. And what a transit it has been. Given their domination of social media, Millennials’ coming-of-age anxieties have become everyone’s anxieties. And no one is more anxious than their parents.

No one grows up alone, but Millennials are in particularly good company. The entire Western world experienced a baby boom after the Second World War, giving rise to its largest generation ever: the Baby Boomers (born 1946 to 1964). The Boomers didn’t have a Great Depression or a world war to distract them from procreating, but they did have the Pill, which led to a five-year increase in the median age at first birth. The long-term effects of the depression, the war and the Pill interacted to produce a birth dearth in the years 1965 to 1980, spawning a generation defined by its very obscurity: Generation X.

The Millennials are, literally and metaphorically, the children of the Baby Boomers. Of course, not every parent of a Millennial is a Boomer and not every Boomer has Millennial children, but most of them do. Perhaps more importantly, most of the teachers of Millennials were Boomers, both because of their relative ages and because the Boomers themselves formed a very large generation of teachers. And when Millennials started attending universities at the turn of the millennium, the senior professors, heads of department, and administrators were overwhelmingly Baby Boomers.

OK, Boomer, this really isn’t all about you, but when you see American cities in flames, widespread condemnation of “the patriarchy”, the decolonisation of the curriculum, calls for the end of capitalism, the police (any police) labelled as fascist, conservative speakers kicked off campus, the rise of environmental catastrophism, racialisation masquerading as racial justice, and direct action masquerading as democracy, does that ring a bell?

It should. We have the Swiss Huguenot royalist Jacques Mallet du Pan to thank for the aphorism, “Like to Saturn, the Revolution devours its Children.” These days, it is more like the children devouring Saturn. The occasional Millennial has been caught out by cancel culture, but it’s their Boomer parents who have really felt the scythe.

When Harvard’s sixty-five-year-old celebrity psychologist Steven Pinker was targeted by the cancel culture, the 629 signatories to the indictment were mostly graduate students and junior academics, exactly the sorts of people he educated in the first place. Pinker went on to sign the Harper’s “Letter on Justice and Open Debate”, penned by the early-Millennial Thomas Chatterton Williams. In that letter, the Old and Young Turks combined to condemn an emerging “intolerance of opposing views, a vogue for public shaming and ostracism, and the tendency to dissolve complex policy issues in a blinding moral certainty”. Since, you know, we must all join together to resist “Donald Trump, who represents a real threat to democracy”.

The 153 would-be liberals of the Harper’s letter recognise that the result of the cancel culture “has been to steadily narrow the boundaries of what can be said without the threat of reprisal”. That’s why they “uphold the value of robust and even caustic counter-speech from all quarters”—except, it is implied, from “right-wing demagogues” and the “radical right”. The problem for the Harper’s 153 is that there is very little of the radical Right left to “resist”. The Left like to identify every Right with Fascism, but it’s hard to be an effective Antifa when there are so few “Fas” around to oppose. Resistance really is futile.

Fascism is a necessary bugbear for leftist intellectuals, because the original “Right” of the French Revolution has just about disappeared. These days even David Flint doesn’t espouse the divine right of kings. (For the divine rights of queens, there’s always the ABC.) But the original “Left” is still with us, or wants to be. The Left takes its direction from the French National Assembly of 1789, where the revolutionary Jacobins sat in a bloc on the president’s left, with the royalists on his right. Impatient with the pace of revolution by legislation, these original leftists gave up on France’s first experiment with parliamentary democracy after just ten weeks.

Yet self-identification as being “of the Left” remains intellectually fashionable even today, and latter-day leftists continue to convince the young that the Left stands for democracy. Not the ersatz electoral democracy of bourgeois representative government, mind you, but true people’s democracy. As in the People’s Republics of Bangladesh and China, the People’s Democratic Republics of Algeria and Laos, and (not to be outdone) the Democratic People’s Republic of Korea. In 1904, Lenin himself declared that every true revolutionary must be a Jacobin. In 1917, he modelled the Red Terror of the Russian Revolution on the Reign of Terror of the Jacobin Montagnards. The Jacobins’ one great mistake, according to Lenin, was to leave too many potential opponents alive.

The latter-day Leninists at the self-proclaimed “socialist quarterly” Jacobin have published a helpful “Guide to the French Revolution” that describes the Reign of Terror as merely a “period of tactical violence”, which must be why it failed to translate “the revolutionary fervor of 1789 into a durable and sustainable revolutionary society”. Lenin was right: not enough killing. Jacobin was founded in 2011 by the Millennial New Yorker Bhaskar Sunkara, and now claims a paid circulation of 60,000. (Just why you should have to pay for a socialist magazine is unclear, but the publishers do at least have the gallows humour to promise free postage after they seize state power.) If there’s going to be a revolution, Jacobin’s New York intellectuals want to lead it. All in the name of the people, of course. Like a true democracy.

Sunkara and his fellow Millennials learned their Jacobinism at some of America’s most expensive private universities. Their professors, many of them veterans of the Revolution of 1968, would have taught them that “a revolution is not a bed of roses”; that “people with power understand exactly one thing: violence”; that “you cannot make a revolution in white gloves”; that “political power grows out of the barrel of a gun”. Secure in tenure, home-ownership and retirement savings, they cannot have imagined that their otherwise highly sophisticated students would have taken them so … literally.

Baby Boomer leftists might be dismayed, but they shouldn’t be surprised. They were warned: by Lenin, by Marx, even by the reactionary du Pan. Writing at the outset of the Terror in 1793, du Pan said of the Jacobins that “whosoever quitted the Club, for the purpose of disputing its authority … ended by returning within its orbit, or being crushed by it”. Members of the Harper’s 153, take note. The Millennial Jacobins smell blood in the water, and it might just be yours.