Given Back as a Gift That Which Was Taken 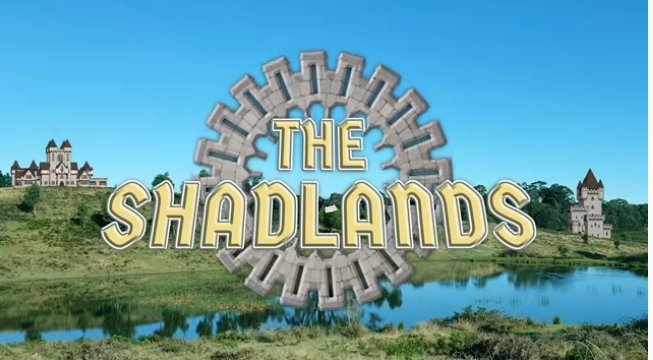 A bastion of liberty is rising in rural Victoria, a vast castle complex known as the “Shadlands”. Right now it’s still pretty hard to find on a map, but you can tour it online wherever you can get an internet connection. Just look for the videos with the kooky dad in the cosplay armour, and you’re there. Medievalist, novelist, sword expert and pop culture commentator Shad M. Brooks is building his castles (three of them) in real time on his Shadlands YouTube channel. With a little help from his family (especially Grandpa Jack) he’s already built the first structure: a dunny.

So far, Mr Brooks hasn’t said a word on his YouTube channel about planning permission, water rights, native title, endangered species, fire management, accident insurance, or koalas, so one can only hope that Grandma Jane is a solicitor. Then again, at the rate castles get built, maybe Brooks can train one of his five kids for the job. Melbourne Law beckons.

In the meantime, those kids (the “Shadlings”) are picking up some very practical skills. They’re planting trees, building fences, and (somewhat anachronistically for a Medieval castle project) wiring sockets. The family has even built a “sword guillotine” from scrap wood. A sword guillotine turns out to be a broadsword on a hinge that swings down like a railway crossing gate to slice through whatever unfortunate fruit (or neck) happens to be on the chopping block. Lest one question the practical value of such a device in twenty-first-century Victoria, Brooks has published several educational guillotine videos on his main YouTube channel, Shadiversity. Spoiler alert: a well-tempered Medieval broadsword will cleave just about anything.

To be fair, most things aren’t designed to be guillotined—but what kid wouldn’t want to see a coconut cut in two? If you can pull the cord yourself, all the better. While Brooks’s Shadiversity is a serious (or sometimes not-so-serious) sword-oriented YouTube channel with more than a million subscribers, his Shadlands channel is all about the kids. That was clear from the beginning. The channel trailer shows the five Shadlings roasting marshmallows and mugging for the camera, behind which Brooks’s wife is safely ensconced. Brooks’s four boys are … energetic. They leave his young daughter struggling for attention. But don’t worry: she promises, “In other videos, you’ll see me in a much … you’ll see me wearing a much pretty … much pretty dresser than this.” No doubt we will.

Brooks’s Shadlings seem to be growing up proudly self-reliant in the Victorian countryside. It’s hard to imagine that they suffered much from Victoria’s six coronavirus lockdowns, or that Dan Andrews sent the state police out to the Shadlands to arrest Brooks’s children for not wearing masks. Safe behind their castle walls (or in their newly built dunny), they won’t have to worry too much when Andrews uses the Public Health and Wellbeing Amendment (Pandemic Management) Act 2021 to suspend habeas corpus. They can just pull up the drawbridge and wait things out. Like the French at the end of Monty Python and the Holy Grail, they’ll be free to blow their noses at Dictator Dan and fart in his general direction.

Most people associate Medieval Europe with filth, ignorance and the Black Death. No doubt that was the most of it. But it was also an era of extraordinary freedom for anyone lucky enough to own a bit of land and a cow or two. That includes women: the European Middle Ages may have been the first time in human history when teenage girls were generally free to choose their own mates. In Merrie Olde England, more than anywhere else, ordinary people could live how they chose. They even made their foreign kings—from Canute the Dane to Bad King John—issue charters promising to respect their rights to life, liberty and the pursuit of happiness.

Go to any law school in Australia, and they’ll either teach you that Magna Carta is the fount of English liberty, or teach you that Magna Carta was a meaningless elite compact that was rescinded before the ink was dry on the parchment. Both views are ahistorical, and both are wrong. Magna Carta wasn’t a new civil law for the English nation; it was an acknowledgment by the King that he had to govern by the existing common laws of the English nation. Though unwritten, those laws were well known to the English people, who expected their monarchs to abide by and enforce them. The barons didn’t rebel against John because he was an ineffective absolute monarch; they rebelled against him because he was a transgressive constitutional monarch. The fact that the constitution in question had never been written down is irrelevant.

Yet Australians have caught the civil law bug, believing their individual liberties to derive from their own 1901 Constitution—and the power it confers on Parliament to make laws with regard to “external affairs”. Consult the Attorney-General’s office or the Human Rights Commission, and they will both tell you the same thing: that Australian freedoms derive from the 1966 International Covenant on Civil and Political Rights, which came into force in Australia on November 13, 1980. Since that auspicious date, Australians have been the beneficiaries of all the rights and privileges that can be bestowed on a benighted people by the good will of the United Nations General Assembly. Before 1980: the gulag.

This is cart-before-the-horse thinking, the kind that doesn’t end up well for the horse. But Australian constitutionalists embrace it, looking to Parliament (and Parliament alone) to legislate their freedoms. They seem not to realise that their ancestors spoke freely before November 13, 1980—and indeed before January 1, 1901—and enjoyed many other antique freedoms besides. They enjoyed freedom of movement, the freedom to farm, and the freedom to worship as they pleased. They even retained the ancient English freedom to keep and bear arms, until they let it be legislated away in 1996. The United Nations General Assembly has yet to weigh in on that, although the 1966 Covenant does at least provide that “no one shall be subjected to arbitrary or unlawful interference with his privacy, family, home or correspondence”—except when posting about coronavirus protests on Facebook.

The American freedom to keep and bear arms had been affirmed exactly one century earlier in England’s own Bill of Rights—at least, for Protestants. No one wanted to run into a well-armed Catholic in seventeenth-century England, let alone a Muslim. (Some things never change.) But as the well-trained London barristers of 1689 made clear, the English Bill of Rights was promulgated by the Lords Spiritual and Temporal and Commons “for the vindicating and asserting their ancient rights and liberties”, not for the positive enactment of new civil law. It didn’t establish English liberties; it recognised them.

Australian constitutionalists routinely disparage the American Bill of Rights, which they just as routinely misunderstand. The misunderstanding is no surprise: most of them were educated in law schools, and you can’t expect much good from those (one respectfully reserves judgment on the ancient Inns of Court). Being lawyers, they think the Bill of Rights empowers courts. In a roundabout way, it does. But the real purpose of a properly drafted bill of rights isn’t to empower the courts. It’s to disempower the legislature.

Fortunately or unfortunately (depending on your point of view), there was little in the English constitution to prevent Parliament from disarming its constituents, and Australians put nothing in theirs to prevent the same. Thus when Dan Andrews is re-elected in November, those Victorians who still believe in freedom will have no choice but to retreat to their castles to wait things out. That’s what our Medieval ancestors did, and things worked out all right for them. Eventually. Just make sure you have a dunny.

They Aimed to Make History. They Got Kamala Harris

Count me a Philistine