It Could Never Happen Here? Ah, But It Is 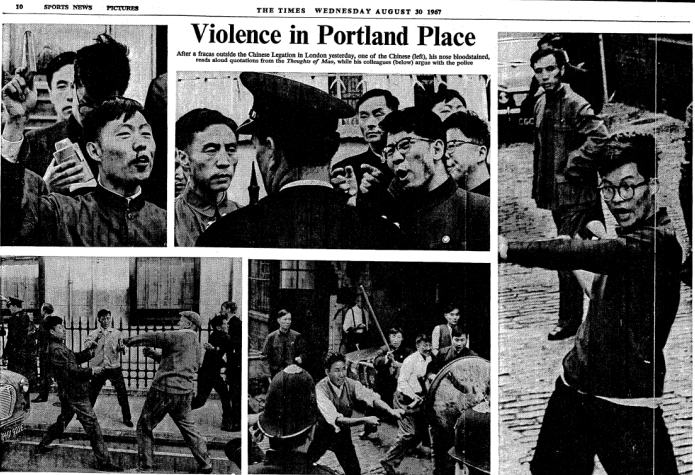 As far as the great British public was concerned, the Chinese Cultural Revolution began in London in 1966 when Chinese diplomats rushed out of their embassy in Portland Place (conveniently close to Broadcasting House) and attacked the police stationed there to guard them. A picture of one “diplomat” threatening a policeman with a hatchet made it onto the front pages (above), and the next day crowds gathered in Portland Place shouting anti-Chinese slogans. Drunken British hooligans—less of a cliché in 1966 than today—were patriotically inspired to ransack a few Chinese restaurants across the country. Their owners defensively placed in their windows signs that proclaimed “We Are Hong Kong Chinese and British”—sentiments that have come back into vogue in recent days.

The Battle of Portland Place, though dramatic, was a probably a calculated response to movement restrictions placed on the diplomats by Harold Wilson’s government which itself was reacting (much more reasonably) to the burning of a UK mission and the roughing-up of UK diplomats by “Red Guards” in China. Both governments wanted the crisis over, and when Mao and his faction re-imposed control over both their rivals and their student revolutionary supporters, they embarked on long negotiations that, among other results, tacitly accepted postponing the return of Hong Kong until 1997.

By then, however, the Brits had become fascinated by the anarchic disorders that were sweeping China, where students paraded their teachers in dunces’ caps, local authorities sent lawyers to spread night-soil over the fields in forced labour, and precious artefacts of Chinese culture were seized from museums and destroyed in the streets. Young Red Guards, waving Mao’s “Little Red Book” (a dull collection of communist equivalents to improving Victorian maxims like “The man who watches the clock will always be one of the hands”), were licensed to imprison, beat, torture and even kill people in positions of authority who supposedly represented the obstacles that traditional culture presented to the achievement of true revolution. Those young idealists, as many have since testified, now look back with shame and horror at their combination of crime, brutality and philistinism towards people who had done them no wrong and in some cases had been their mentors.

What was mystifying then—and to some extent still is—was whether this was anarchy or dictatorship. I remember the exiled Hungarian historian Tibor Szamuely telling a Tory audience in London, only partly tongue in cheek, that all the sources of information seemed to be Maoist: “One radio station will say, ‘In our province the reactionaries have killed 1000 people’ only for another to reply, ‘That’s nothing. In our province the reactionaries have killed 10,000 people.’” Was the entire Cultural Revolution an exercise in power politics to destroy his enemies or a kind of revolutionary fiesta that would ensure the loyalty of an entire generation of young Chinese to Mao’s scorched-earth version of revolution?

It was probably both. If so, the first purpose was achieved and the second inevitably failed. Mao emerged from the Cultural Revolution supreme in China, a kind of god-man, with his party rivals dead or imprisoned, but after his death the Maoists were purged and the politics of revolutionary egalitarianism abandoned. Deng Xiaoping introduced his capitalist-roader economic reforms about the time Margaret Thatcher arrived in Downing Street, and China’s power and prosperity have grown rapidly ever since. Whatever criticisms the Chinese people have of their government today, they show no nostalgia for Mao or his ism.

It was only outside China that enthusiasm for Maoism survived—among left-wing politicians like Britain’s Tony Benn, academic revolutionaries like Malcolm Caldwell and John Gittings, and Hollywood celebrities like Shirley Maclaine. Some Westerners saw Maoism admiringly as the most complete rejection ever attempted of the alienating but seductive Western liberal capitalism they despised. Others were simply naive as to what it was like to live under it. Both were refuted by Deng Xiaoping’s response to Shirley Maclaine in a White House receiving line when she said that a doctor sent to hard labour in the fields to overcome his sense of bourgeois privilege had told her it was the most uplifting experience of his life.

“He told you that, did he?” replied the plain-speaking Deng. “He was lying.”

Other Westerners in 1966 and later looked at the theory-led antics of the Cultural Revolution with amazement and thought, “It could never happen here.”

It’s happening here, of course, at least in Britain and the United States, and even in Australia, though less aggressively. The scenes of crowds burning cities, attacking the police, looting small businesses, and then in an illogical but somehow understandable progression, pulling down statues, destroying national symbols, and doing their best to erase familiar signposts to the past to leave little doubt about what’s going on. It’s a revolution against our culture, our history, our countries and ourselves. And its cause seems to be the brutal killing of George Floyd by a Minneapolis policeman, which immediately became the worldwide symbol of racism against Black Americans, especially at the hands of the police, and that in turn has led to the rapid spread of this directionless anarchy.

We can explore many speculations about why this spread of this anarchy has been so swift and dramatic. People are bored and angry after eight weeks of lockdown. They’re afraid of the economic consequences, and a sharp fall in their standard of living, when the pandemic finally ends. They want to blame someone, probably the government, for their own anxiety.

But none of those explanations touches the main mystery. The killing of Floyd is universally condemned; it will be punished with remarkable speed by the standards of American justice; and it doesn’t illustrate the war on Black America by the police, for the substantial reason that there is no such war. Black Americans suffer many serious social disadvantages, but they are the result of many complex causes unrelated to the racism of other Americans. The figures for fatal shootings of men by the police show that about two thirds of the victims are white and only one third black—nine people last year. Though, admittedly, police shootings of black men are disproportionately high in relation to the black percentage of the population, they are disproportionately low in relation to black involvement in crime. In particular, the overwhelming majority of murders of black men are committed by other blacks. Even if racism plays a part in the social problems of Black America, it plainly is not their main, let alone total, explanation.

As the conservative black columnist Larry Elder recently wrote: “Assume there’s a vaccine against white racism. Would 70% of black kids STILL be raised in fatherless homes? Would 50% of blacks STILL drop out of many urban high schools? Would 25% of young black urban men STILL have criminal records? Would blacks STILL kill 7000 blacks every year?” The implied answer, alas, is that probably things would improve only slightly, if at all. And if the solutions proposed by progressive elites were adopted, for instance defunding the police, it would make the lives of ordinary Americans, blacks in particular, more dangerous and poorer.

And even if you think that Elder is wrong about America, why should the murder of someone in Minneapolis—a city ruled by progressive Democrats for two generations—be a legitimate excuse for riots in London and other British cities in which the police bend over backwards in order to maintain good “community relations” with all races? Why too should the riots rapidly become violent protests against the symbols of national life and history? My replies, drawing on the experience of the Chinese Cultural Revolution would stress five similarities.

The first would be that there’s a deep political conflict between different political and cultural elites in Britain and America which is now being fought on the terrain of patriotism versus multiculturalism and the creation of the “next America” or the prevention of Brexit.

The second is that the anti-nationalist side, in part because its electoral strength is rooted in black and minority constituencies, has adopted a narrative that treats America as a fundamentally flawed and racist society in which black people are the victims of racist institutions that must be torn down and replaced.

The third is that progressive elites have their own Red Guards who advance and even enforce this analysis in slogans that are a mixture of idealistic and intimidating. “Black Lives Matter” is both true and worth saying, but when it’s accompanied by the claim that “All Lives Matter” is racist, then it becomes a hostile sectarian claim and an implied threat. Demands that others “take the knee” is simple intimidation. Some recent protests were brutally insensitive to the destruction of black livelihoods they caused. And Antifa is Thug Central.

A fourth is that, because the central claims of the revolutionary cause are false and some of its actions unlawfully violent, its propaganda outlets have to lie and obfuscate in their accounts. Here is how BBC news reported the first London protests: “27 police officers injured during largely peaceful anti-racism protests in London.” Or: “In our province the reactionaries killed 10,000 people last week.”

And, finally, the authorities enforce the law selectively in progressive jurisdictions from Bristol to Minneapolis.

It’s a grim picture, but this Cultural Revolution is in its earliest stages. We can’t know how it will turn out. Such events generate opposition automatically as their true oppressive character becomes clearer. Nor should we underestimate the appeal of our own political culture to refugees from its opposite. Britain has just announced that it will admit more than three million Hong Kong UK passport-holders and give them a path to citizenship A poll shows this proposal was welcomed by 57 per cent of all voters and majorities in all political parties—a sharp corrective to the media and progressive narrative of British racism. These new Brits are likely to have a sceptical attitude to cultural revolutions and some knowledge of where they lead. Only recently some of them were waving Union Jacks rather than burning them, just as their fathers and mothers built a replica of the Statue of Liberty in Tiananmen Square.

What a tangled Brexit web we weave