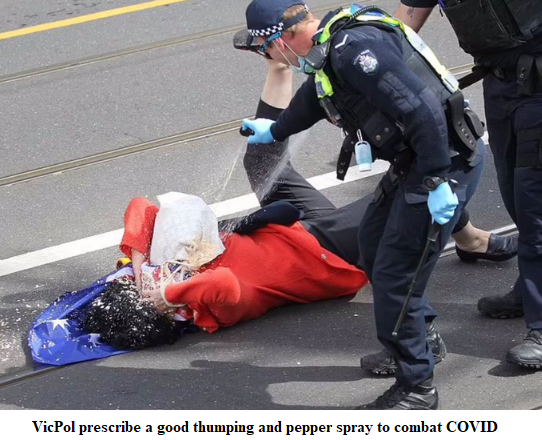 The last time I checked, there had been recent mass protests against governments and their anti-Covid regulations in cities in France, Germany, Austria, New Zealand, Italy, Australia, the United States and most influentially in Canada where a “Freedom Convoy” of Canadian and US truckers had snarled up the parliamentary district of its capital city, Ottawa, by parking in force and hooting their horns.

I had previously thought that the height of Covid policy silliness had been reached in Melbourne when a policeman entered a friend’s garden where he was digging responsibly alone and threatened him with a fine unless he put on a mask. But no. The flame that torched the truckers’ protest in Canada was the mandate from the Canadian government that truckers must be vaccinated before driving their long and lonely way along the vast interstates of North America.

Why was the mandate both an overreach and a serious political error? Consider, first, the vaccine mandate itself: there’s something in it—but not much. It’s a policy the World Health Organisation no longer supports as effective. Across Canada and the US, state and local governments are abandoning it under popular pressure. And it violates ethical rules against forced medical treatment. On top of that, since about 90 per cent of Canada’s truckers are already vaccinated, does it make much sense to compel a small number of drivers whose job ensures extreme social distancing anyway to be vaccinated against their convictions—and as it quickly became clear, at the cost of a major political and economic crisis?

The major crisis emerged because the truckers provoked two very different reactions as their convoy began rolling towards Ottawa. From many ordinary Canadians who have not been enemies of tough Covid regulations, let alone “anti-vaxxers”, they received sympathy and support. Applauding crowds stood on the roadside waving Canadian and American flags and defying the stern (if dubiously legal) warnings from federal, state and provincial authorities that they were to do no such thing.

Those warnings were early signs of the second reaction: a fierce and over-the-top contempt for the truckers from Canada’s media and political establishments. The Prime Minister, Justin Trudeau, kicked off this woke offensive by describing them as “racists” and “misogynists” who held “unacceptable” opinions against which he would stand firm. “They take up space,” he said ominously. “We have to make a choice: do we tolerate these people?” He then departed Ottawa and left the debate to his deputies and Opposition parties.

His words were nonetheless extraordinary. To begin with, they don’t seem to be true. There’s no evidence that the great majority of the truckers are racists, misogynists, white supremacists, or otherwise unacceptable. Ottawa’s progressive press corps would love to find such evidence. As Jonathan Kay wrote in Quillette, it would be their dream come true of breaking the story of Canada’s own January 6 insurrection. They’re still looking.

And what crimes have the truckers committed to make Trudeau ask: “Do we tolerate these people?” They were engaged in a peaceful protest which throughout the Western world is a civil right. At most they were guilty of obstruction. That clashes with other people’s right to go about their lives unmolested and so cannot last too long. Other organisations—notably Black Lives Matter and Extinction Rebellion—have exercised this right in ways that inflict far more inconvenience on other people and cause deliberate damage to public property without being warned that they “take up space” and might risk the government’s ceasing to tolerate them.

Of course, BLM and XR are radical movements which enjoy greater sympathy from modern bureaucracies which usually want to move in the progressive direction that such protesters are pushing them. This bias was on full display in the reactions of the local Ottawa police, most MPs in a Parliament that has a Left-liberal majority, and the establishment media, almost all of whom initially embraced the claim that the truckers were “far-right” extremists, racists and so on who were undermining Canada’s safe space for progressive multiculturalism, decency, and, er, the long struggle against Covid.

That appeal usually works with professional elites and the political class while being wearily tolerated by the rest of us unless the gap between the allegations and what the public sees is too wide. There are many things the public doesn’t see because the media gatekeepers think doing so might give us the wrong ideas. But simply not covering a mass demonstration of “Big Rigs” parked outside Parliament—especially when it develops into a multicultural musical fiesta of defiance against Trudeau’s heavy-handed Covid regulations—wasn’t really a practical possibility. Media coverage of the fiesta, showing truckers clearing rubbish and handing out food, then contradicted the media’s caricature of them too conclusively. The “narrative” began to shift and to influence others elsewhere. But how?

My impression is that it produced quite a well-balanced response among Canadians. They rejected the establishment’s punitive caricature of the truckers while also thinking sensibly that they should end their protest and return to work. It was causing too much chaos at the US border and inflicting too much noise and disruption upon the residents of Ottawa. Also, the truckers had made all the converts they were going to make and should quit while they were ahead.

Among those converts were the Opposition Tories who (in their usual nervous zig-zagging way) first supported the government, then dumped their own leader, next advocated talking to the truckers about what they wanted, and finally proposed lifting the mandate. That may not seem like inspired statesmanship, but it compared well to Trudeau’s combination of flight, absence, stubbornness and anti-trucker rhetoric. The Tories have gained a little from this extended crisis.

Recent opinion polls show that the Prime Minister is blamed by voters both for his exaggerated contempt for the truckers and, slightly inconsistently, for disappearing from Ottawa rather than doing something about their protests. He’s caught in a bind of his own weaving. He doesn’t want to validate their protests by talking to them but his rhetoric implies a crackdown on their protests that would be risky and implausible. Crackdowns only work well when one of two conditions applies: first, the demonstrators themselves have a strong respect for constitutional authority and court decisions; second, the use of force against demonstrators is likely to disperse them without serious casualties.

Neither condition is present in Canada, and though the crisis has not yet been resolved in anyone’s favour—the truckers were gradually leaving and the Prime Minister was still perched on his high horse at the time of writing—he nonetheless emerges from it a diminished figure. An entitled young leader of an unpopular woke establishment, he displays an endless succession of new clothes. But is there a prince inside them?

It is outside Canada, however, that the truckers have had most impact. Their protest was launched at the exact moment when people in almost every country were feeling anxious to escape from the Covid restrictions that made life miserable, increasingly doubtful that they had been really necessary, and nervous that on balance their long-term consequences would be negative—permanent loss of income and massive public indebtedness from the lockdown, more deaths and worse health outcomes from cancelling non-Covid treatments, the crackdown on civil liberties, the resort to demonising both medical experts and entire social groups who dissented from a medical orthodoxy that now looks dubious, and the rise in social distrust as scientific disagreements were weaponised for partisan political purposes. The truckers caught, crystallised, and transmitted this new mood of disillusionment across borders.

All this was dramatically illustrated by the support that the truckers received from other protesters across the world but much more significantly by the fact that the politicians themselves now began to retreat from lockdowns, mask mandates, vaccine passes, and all the weaponry of Covid statism. Whole countries and regions such as Britain and Scandinavia have recently held their own “bonfires of restriction”, and perhaps more significantly American states and cities under Democrat administration have reluctantly joined Governor Ron DeSantis of Florida in opening up. (Of course, there are still “authoritarian” holdouts such as New York and President Macron’s France. How will they fare in this year’s elections?)

A new interpretation of the world’s experience of Covid in the last two years is starting to take shape roughly as follows.

Governments panicked, cast aside their earlier pandemic planning based on protecting vulnerable groups, and adopted approaches to suppress the virus by locking down the entire society. This was the wrong approach and maximised economic problems.

Almost all the forecasts supporting this policy were exaggerated. Covid was a nasty illness that killed people: but its infection fatality rate was low: most of its victims were elderly people with pre-existing illnesses (people like me, in fact); and “excess” deaths were quite low.

These realities were concealed by not distinguishing between dying with and dying of Covid, by suppressing medical information that contradicted the orthodoxy, by censoring scientists who dissented from it, and by “nudging” people to accept lockdown policies at a subconscious level.

We can reach a reasonable interim verdict on all this by contrasting two countries that differed: Britain that followed the orthodoxy and Sweden that adopted a model rooted in looser restrictions and personal responsibility. Britain’s death rate is almost twice as high as Sweden’s; its accumulated indebtedness is more than twice as high; and its economic recovery has reached only 1 per cent above pre-pandemic GDP compared to Sweden’s 5 per cent.

No doubt errors and fallacies will be found in this new orthodoxy over time. But it seems unlikely that they will be as damaging as those listed above. Nor can those failings be blamed on Boris and Trump. Mainstream media, Big Tech and the scientific establishment were equally complicit with governments in this campaign of medical authoritarianism and official disinformation. It was the work of a social class as much as of a government or a political party.

That’s what the truckers were protesting against in Canada, and that’s why they found a sympathetic reception even from those who disagreed with their protest.

What a tangled Brexit web we weave